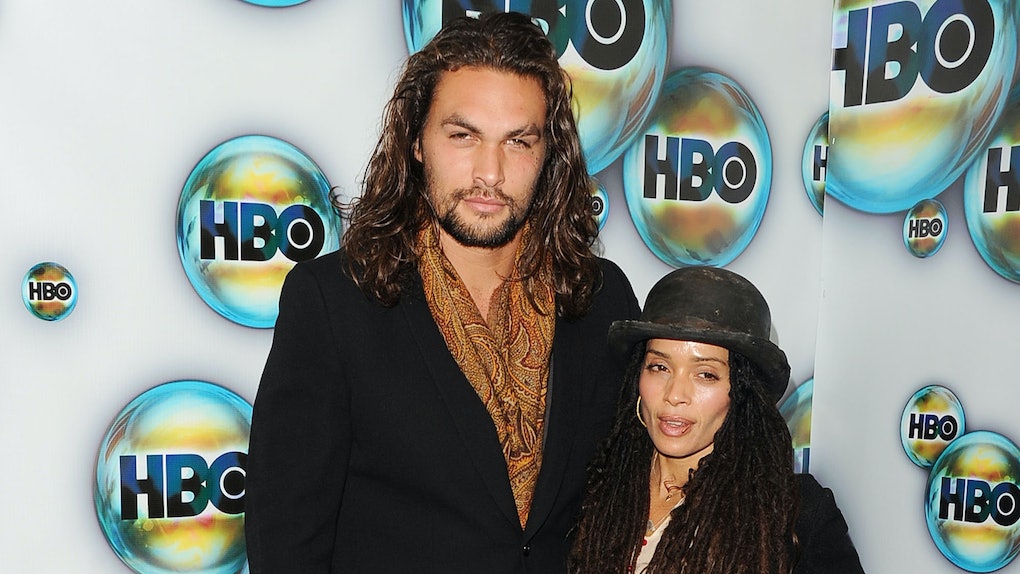 Actor Jason Momoa is having a bit of ~a moment~ right now. The Game of Thrones actor was chosen to portray Arthur Curry in Aquaman, which is set to release Dec. 21 in the U.S., and I honestly couldn't tell you an actor who is a better choice than Momoa. And at the Hollywood premiere of the movie on Wednesday, Dec. 12, Momoa brought his wife of one year, Lisa Bonet, as his guest. Let me tell you, fam — the photos of Jason Momoa and Lisa Bonet at the Aquaman premiere are pure perfection, you'll question if these two are even mortals at this point.

Walking the Aquaman red carpet outside the TCL Chinese Theater, the 39-year-old actor walked alongside his 51-year-old wife and their two children, Lola, 11, and son Nakoa-Wolf, 9. The couple, who've been together since 2005, looked head-over-heels in love, and it was all sorts of steamy.

But first, let's have a quick chat about wardrobe, because these two nailed the effortlessly-cool look flawlessly. Bonet wore a sheathy black dress with a red tasseled sash, and Momoa looked dapper AF wearing a velvety black tuxedo jacket with matching black pants.

I mean, just look at them. Does this couple not scream timeless chic?

How do they do that?

Again, just how is it even possible?

It's almost as if they're subtly telling you that they're probably the coolest people you'll ever meet.

And they wouldn't be wrong.

Let's pause for a moment to appreciate this deep and ~sensual~ kiss the couple shared for the cameras:

And let's just briefly drop our jaws to admire how swiftly Momoa picks up his wife with ease:

Is this not the most gorgeous family you've ever seen in your entire life? (This isn't really a question, but more of a statement.)

And FYI, if you were debating whether or not to buy tickets for Aquaman, the reviews are looking pretty favorable for the DC Comics film.

Aquaman is a step toward restoring equilibrium, creating a sprawling undersea world that most closely resembles the Thor franchise in terms of scope, majesty and happily, humor.

And The AVClub called Aquaman "big, cheesy, and fun" — but in an oddly positive way, giving a nod to Momoa's character:

Aquaman needs its smirking, beer-loving, roadie-looking, Chippendale-chested hero — not to save the day, but to remind us that this is stuff is about as goofy as it gets.

I couldn't be more excited to go see the film. Yes, I'm interested in the DC universe, but I'd be lying if I said I also didn't want to see Jason Momoa's ripped body (don't @ me). I mean, just check out the Aquaman trailer below and tell me that you don't feel even remotely the same way:

In the meantime, I'll just be sitting over here, drooling over Jason Momoa and his gorgeous family.

More like this
'He's All That': Premiere Date, Cast, Trailer, Filming News, & More
By Dylan Kickham
Why Did Addison Rae Deactivate Her Twitter? Fans Think This Is The Reason
By Brandy Robidoux
Britney Spears' Instagram Message To Fans "Concerned With Her Life" Is So Positive
By Brandy Robidoux
Stay up to date