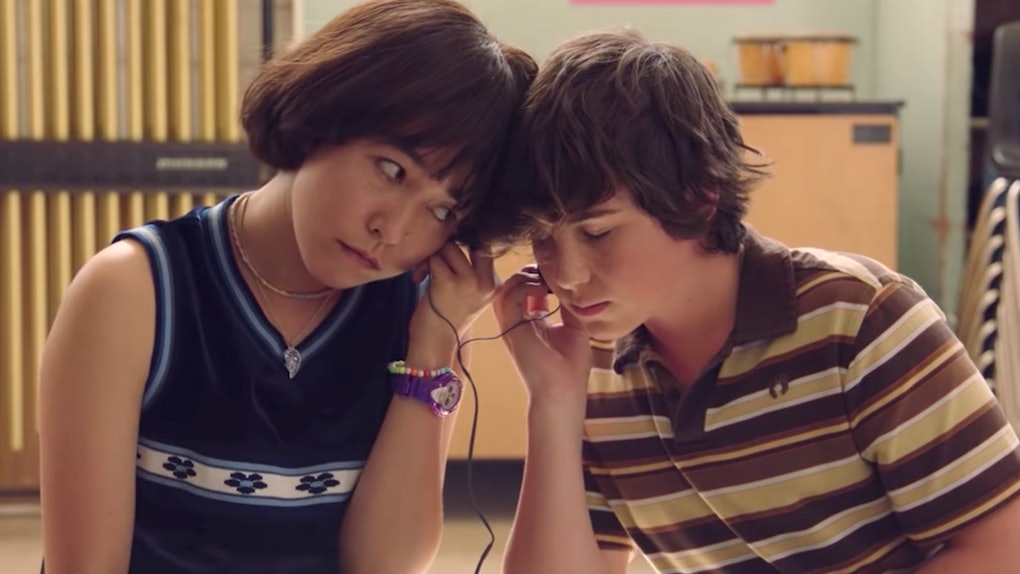 The 'Pen15' Soundtrack Will Transport You To Your Angsty Childhood Bedroom

There is nothing like taking a look back at your awkward, middle-school years. Yes, you probably cringe to no end when you think about your first AIM screen name or how you acted at your first school dance, but there is still a kind of magic in this nostalgia. And no show has ever encapsulated the cringey-sweetness of specifically millennial nostalgia better than Pen15. The new Hulu series is a guaranteed trip for all '90s kids, not only in its storytelling but also its music. The Pen15 soundtrack is your go-to millennial nostaglia playlist to immediately bring you back to the days of gel pens and Tamagotchi pets.

In case you have not watched it yet, Pen15 is a new Hulu comedy created by and starring Maya Erskine and Anna Konkle, who play 13-year-old versions of themselves in the year 2000 to portray all of the awkwardness of middle school. The show is unique in that the rest of the middle school cast is played by actual pre-teen actors, despite Erskine and Konkle aging down to more than half of their real ages. The episodes tackle issues that will feel specifically relatable to people who attended middle school in the '90s or early 2000s, such as choosing which Spice Girl you are and navigating the dangerous landscape of AIM.

What really helps Pen15 fully deliver the '90s/early 2000s feeling is its soundtrack, which is filled with inescapable pop songs from the era. In one episode, Maya and Anna make plans to win tickets to a B*Witched concert, and even though "C'est la Vie" doesn't play, you can immediately hear the song in your head. Check out the full soundtrack from the series below:

As any '90s kid can tell, this soundtrack hits some of the absolute definitive songs and artists that just sound like the 1990s. Mandy Moore's "Candy" is a legit millennial time machine.

And of course, no '90s playlist could ever possibly be complete without the Spice Girls. The girl group's single "Say You'll Be There" features prominently in one of the episodes of Pen15, and it will totally bring you back to when you were arguing with your friends about who was the most like Posh.

Don't even get me started on the emotional gut-punch of hearing "Gotta Be" by Des'ree over a particularly heartwarming moment in the season finale.

Get ready for a trip back to the '90s when you start Pen15, which is streaming now on Hulu.