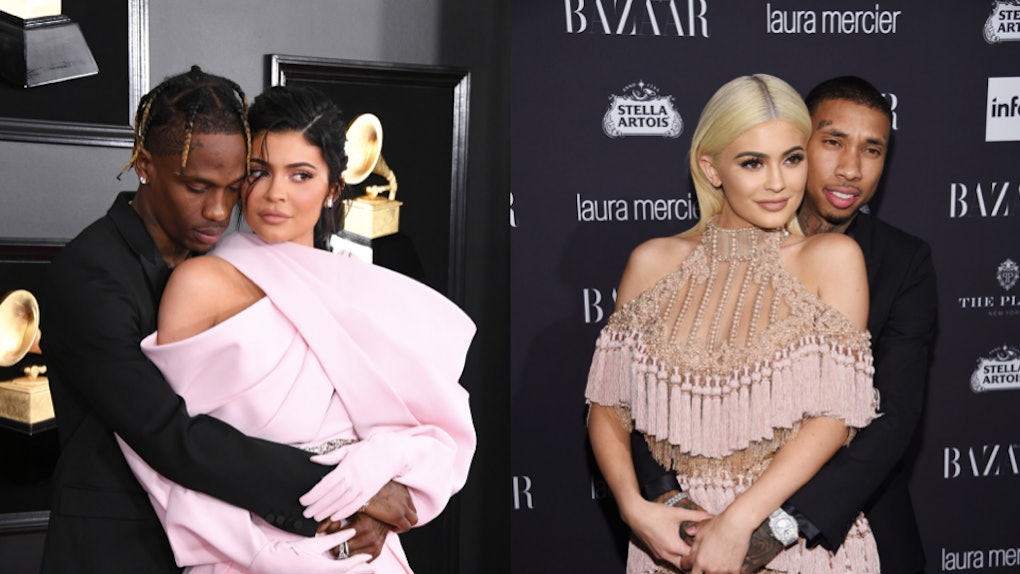 While Kylie Jenner may have had her share of friend drama recently, when it comes to her love life it appears she's found security and happiness with the father of her child, Travis Scott — and, honestly, good for her. Especially considering how tumultuous the entire Kardashian-Jenner clan has had it when it comes to matters of the heart. Like her sisters, Jenner has had her share of romances over the years, and looking back over her dating history, the partner Kylie Jenner is most astrologically compatible with is an indication that, in the end, it all may have been worth it.

Jenner was born on August 10, 1997, under the sign of Leo, and this fire sign makes for a passionate partner, if one who can occasionally be a little dominating. While this sign is very generous and loyal to the people they love, they do expect to be the driving force and the alpha in the relationship. They need a partner who is happy to let them take the lead and who can appreciate and adore them for exactly who they are — and frankly not everyone is up to the task. Sexual chemistry is also a make or break for Leo, who needs a partner that can keep pace with them but also connect on a deeper emotional level. Looking back at Jenner's past loves, some were good astrological fits, while others were... not so much. Her most astrologically compatible partner may (or may not) surprise you.

Jenner’s rumored first boyfriend was musician Ramsey IV (aka Ramsey Lewis, IV). Allegedly, the two dated from 2008 to 2011. (Elite Daily reached out to their reps for comment but did not hear back in time for publication.) They reportedly began dating when Kylie was 12 years old, so it's not a huge surprise that this relationship ended, but it didn’t help that their astrological compatibility wasn’t exactly off the charts. Ramsey's May 20 birthday makes him a Taurus. The issue with Leo and Taurus is that, in some ways and depending on each person's individual personality, they can actually be too alike. Both signs need partners who are eager to invest a lot of energy and attention in them. When both partners are holding back, waiting to see how the other proves themselves, it can become frustrating and unsatisfying. Eventually that romance can fizzle.

Jenner’s relationship with Australian pop star Cody Simpson was a brief one, which actually makes sense considering that, of all her partners, this one was her least compatible. Simpson was born January 11 under the sign of Capricorn. While Leo and Capricorn can make for incredible friends and business partners, thanks to their shared drive and strong sense of loyalty, when it comes to romance this pairing rarely clicks. Capricorn's priorities and pragmatism means they are unlikely to have the time or desire to lavish the kind of attention on Leo they expect from a partner. When Leo feels unfulfilled, they basically shut down emotionally and pull back. It’s not an impossible paring to make work, but it is that: work.

Rapper Tyga (aka Micheal Ray Stevenson) was Jenner’s first serious relationship — and it was a rocky one, to say the least. The first met in late 2011 at her sister Kendall’s 16th birthday party, but they didn’t become Instagram official until 2014. The couple dated on and off for three years, finally splitting up for good in April 2017. When you take this couple's astrological compatibility into account, it’s clear why this connection was a challenging one. While Leo and Scorpio both are very passionate signs with intense sexual chemistry, they have trouble connecting and getting to a deeper level of intimacy with each other because they struggle to communicate. The have very different ideas of what love looks like. In the case of Leo, it's about affirmation and grand gestures, while for Scorpio it means opening up all your most private and closely held emotions and secrets. These signs simply speak different love languages, and that can leave them both feeling unsafe and unfulfilled

Jenner’s current relationship with rapper Travis Scott is, astrologically speaking, her best to date. The two first met at Coachella back in April 2017. There was an instant connection between them, so as Jenner told GQ, she basically joined him on his tour. Shortly after that, Jenner announced she was pregnant with their daughter, Stormi, and the couple has been together ever since.

While only time will tell if this is a forever love, the stars are definitely on their side. Scott’s birthday is April 30, making him a Taurus. Leos and Taurus really do connect on so many important levels. They are highly sexually compatible with a chemistry that is both fiery and easy thanks to Taurus' connection to Venus. They are on the same emotional wavelength and want the same things out of life, like a loving, stable family life. They also just know how to have fun with one another. The one stumbling block these signs will face is around issues with communication. Both Taurus and Leo have a tendency to get stubborn about being "right" and can dig their heels in. This can mean that an argument that would typically be resolved in a matter of hours can sometimes go on for days. Each partner will likely try to outlast the other, holding out for the apology they feel they deserve. Fortunately, with plenty of love and focus on empathy, this is far from an insurmountable issue for these two.

I don’t know about you, but I think these two really do have what it takes to go the distance, and it appears that the stars agree.