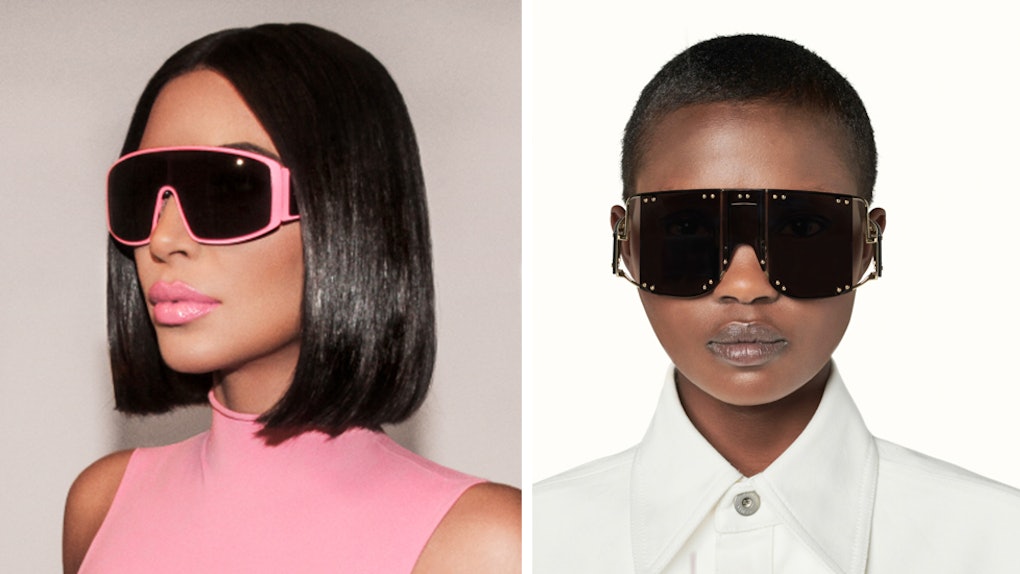 The Oversized Sunglasses Trend Is Back & Bigger Than Ever (Pun Intended)

If this article starts to sound like an ode to Paris Hilton halfway through, I'm sorry in advance, but your girl has to give credit where credit is due! A whopping 15 years after Ms. Hilton made massive sunnies a Hollywood It Girl necessity, the oversized sunglasses trend is back and bigger than ever, pun most definitely intended! Finally, those of us who have struggled to wrap our heads around late 2018/early 2019's teeny, tiny sunglasses styles can rejoice, and treat ourselves to some big shades a la Hilton back in 2005. Aka, the good old days, when the right sunnies could completely mask my no-makeup makeup face while I ran errands and avoided the people I didn't want to talk to. Isn't that why we all liked them so much? Just me?

Paris Hilton is the founder of many a modern trend — she even claims to have invented the selfie, which isn't exactly true, but I stan a confident legend nonetheless. The number one trend she definitely did invent, though, is that of the oversized sunnies, often paired with Resting Bitch Face, a little purse, and a little dog.

Back in 2005, even a smiling Hilton looked intimidating AF in her massive shades:

Listen. As a GWABG (Girl With A Big Head, an acronym I just made up on the spot which will most definitely not catch on.), I've been struggling to make the tiny sunglasses trend look cute. It's just not for me! So when I noticed the biggest celebs in the biz wearing Hilton's signature look, I was thrilled. Beyoncé, Rihanna, Kim Kardashian-West, and Kylie Jenner have all been sporting huge sunglasses this summer, and it's safe to say the trend will wipe out tiny sunnies entirely in the next couple of months. Finally!

If Beyoncé says huge square sunnies are back, then they're back, people:

Bey's pair are likely a little more luxe, but these Premium Cutout Square Sunglasses in Gold/Green ($10, forever21.com) do the trick for just $10 bucks:

Rihanna loves the trend as well, and she even included a pair of shield shades in her luxurious new Fenty sunglasses collection:

RiRi's faves are not cheap — the Fenty Blockt Mask Sunglasses in Black Smoke ($480, fenty.com) will cost you a pretty penny:

Real talk, this trend better last through next season, because I'm not about to drop almost half a grand on a pair of sunnies that'll be out of style in a few months. Oversized sunglasses for life!

Kim Kardashian is also a fan, seen rocking shades by Carolina Lemke, for whom she is a brand ambassador:

Kardashian is rocking the Gemini Sunglasses ($90, carolinalemke.com), which come in multiple colors, including a bomb Neon Pink:

Of course, she's not the only Kar-Jenner loving the trend. Kylie rocked some massive blue-tinted shades in this post on Instagram:

She also recently posted while celebrating her birthday in a Dior bikini and the largest cream sunnies I've ever seen, so it's safe to say her collection of huge sunglasses is growing. Will it ever rival Paris's? Doubtful, but we'll see.

To channel Kylie's blue vibes, the Phantom Sunglasses in Blue ($60, quayaustralia.com) are the perfect pick:

Whether you like neutrals or bold hues, shield shapes or classic squares, there's definitely a pair of oversized sunnies out there to suit your vibe. If you need more inspo, simply Google photos of Paris Hilton in 2005, and prepare for a bevy of "That's hot!" comments on your first Instagram selfie in your massive new shades.

More like this
Good American's Summer 2021 Swimsuit Line Is Here & The Vibes Are *Chef's Kiss*
By Margaret Blatz
How To Make Your Closet Look Like A Boutique With 10 Trendy Products $40 Or Less
By Marisa Casciano
How To Get A Trendmood Box, AKA The Next Big Thing In Beauty Box Subscriptions
By Bella Gerard and Theresa Massony
Stay up to date