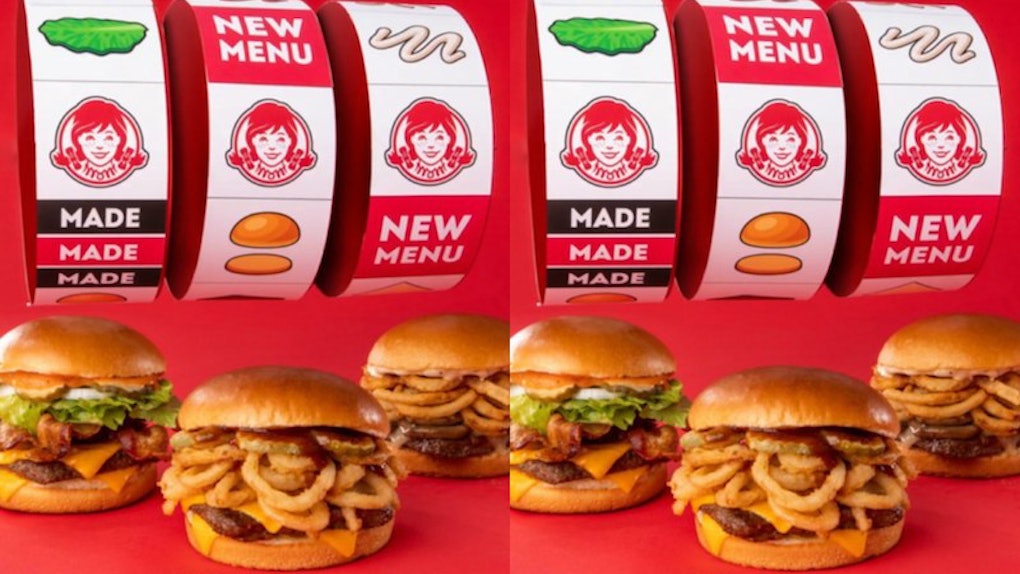 I don't know about you, but I always get a cheeseburger whenever I visit Wendy's. (Yes, I usually top it off with Frosty — but that's not the point.) There's something extra delicious about a never frozen beef patty with a layer or two of American cheese, and it's the perfect lunch whenever I'm craving a burger. However, it looks like my go-to order is about to change up a bit, because the new Made to Crave Wendy's cheeseburger menu is finally here. Let's just say it'll bring way more than cheese to the table, and I'm all for it.

The new Made to Crave selections at Wendy's were announced on Feb. 4 via press release, and all three burgers on the menu are currently available. What do those burgers include, might you ask? Brace yourself (and have a snack), because the options might make you extremely hungry. According to Wendy's' press release, the new Made to Crave cheeseburgers include the S'Awesome Bacon Cheeseburger, the Peppercorn Mushroom Melt, and the Barbecue Cheeseburger. I'll get into detail about each selection in just a moment — but before I do, take a glimpse at the patties in the photo below.

Don't they look delicious? I don't know about you, but my mouth is definitely watering RN. While you're thinking about the crave-worthy burgers and buns, I'll get into some detail about each one.

Let's start with the S'Awesome Bacon Cheeseburger, which you can purchase for a suggested retail price of $5.29. The burger starts off with never frozen beef that's topped with two slices of American cheese (yum). Then, it's layered with Applewood smoked bacon, pickles, sweet onions, and iceberg lettuce. Oh! I can't forget the most important part: the S'Awesome Sauce, which is apparently "lathered" between the buns, per Wendy's. It sounds freaking delicious, to say the least.

If your mouth isn't watering yet, wait until you read about the next Made to Crave menu option. I'm talking about the Peppercorn Mushroom Melt, which can also be purchased for a suggested retail price of $5.29. The menu item begins with a never frozen beef patty and a slice of natural Asiago cheese. The burger also includes sautéed, roasted, and then seasoned white mushrooms and crispy fried onions. The burger is then completed with smoked peppercorn aioli, which makes it even more crave-worthy.

I know you're probably starving, but I have one more cheeseburger to put on your radar.

Last, but certainly not least, is the Barbecue Cheeseburger. According to Wendy's' press release, the burger starts off like its others: with fresh, never frozen beef. It's then topped with not one — but two — slices of American cheese, three pickles, and fried onions. Of course, the burger is then smothered with "Kansas City-style" barbecue sauce (hence its name). Unlike the other two Made to Crave options, you can buy this one for a suggested retail price of $4.79.

Kurt Kane, Wendy's Executive Vice President, Chief Concept and Marketing Officer, talked about the new menu in a press release. He said, "There's a reason we named the new menu line, Made to Crave. Because it's true. These hamburgers are so undeniably good that Made to Crave is being integrated as part of our everyday menu."

I mean, yeah, I agree. I have't even tried these yet and I'm already craving them. If you feel the same way, head to Wendy's and give one a try. No rush, though, because they're now part of the permanent menu. Bon appétit, cheeseburger fans lovers.