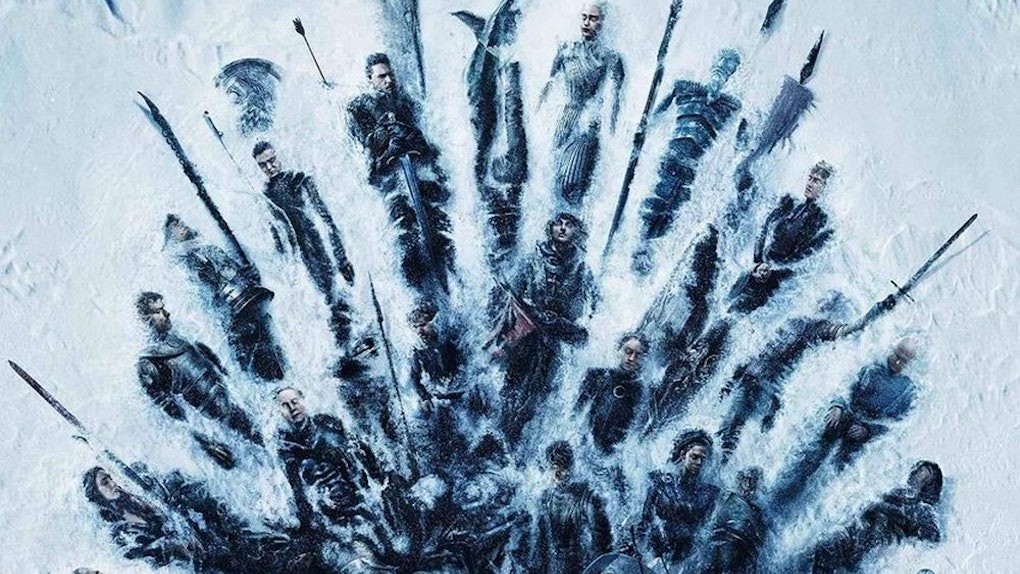 There are less than two weeks to go before the final episodes of Game of Thrones arrive. This week already saw the release of one of the most brutal teasers in a show full of shocking moments, the "Aftermath" teaser suggesting that the battle of Winterfell will be lost, and no survivors left to tell their story. Now, a new Game Of Thrones Season 8 poster has arrived to go along with it, with the most disturbing rendition of the Iron Throne yet.

The series has been an ensemble piece from the first season onward. However, over the years, once the cast stopped expanding to keep up with the constant attrition of bodies, a few main characters have emerged. Even with this slow refocus, the show still has a cast that numbers in the dozens, making it hard to put a single face on the posters.

Instead, as the show did from the beginning, the main character is not a person, but an object: the Iron Throne. Season 8 has doubled down on this imagery, with the character posters each featuring the actor in question seated on the throne, or, in the case of the official artwork for the DVDs and large scale adverts, an Iron Throne that slowly morphs into a dragon. (Drogon, to be precise.)

But what if no one survives to sit upon it? The latest Game of Thrones official poster suggests this is a serious possibility.

In terms of how to get every character on the poster, this is a smart solution. The Iron Thrones has always been presented as a chair forged from the melted swords of defeated Targaryen enemies. But now, in Season 8, the chair is forged from the bones of those who fought and died over it.

Not every face is clear, but from left to right, I can make out Grey Worm, Sam Tarly, The Hound, Melisandre, Jaime, Brienne, Arya, Jon Snow, Tyrion, Daenerys, Bran, and Sansa. Even the Night King is there, next to Cersei, Varys, and Missandei.

Fans who look closely might find this doubly disturbing because it's not just the dead forming the Iron Throne, but arrayed to create the throne's signature silhouette. As viewers who recently rewatched the pilot will recall, the White Walkers like to arrange the bodies of the fallen to send messages.

Of course, the message here is, "Game of Thrones is coming back, so tune in on Sunday, April 14." But that's not the point. The point is this is perhaps the darkest, most chilling poster the series has put out to date, leaving everyone viewers ever cared about frozen in its wake.

Considering the trailer suggested the fallen of Winterfell have risen and moved on to feast upon the living, it keeps with the final season's bleak themes.

How many of those left on Game of Thrones will find themselves frozen, or worse, turned into wights? Fans will find out when Season 8 premieres at 9 p.m. ET on Sunday, April 14.