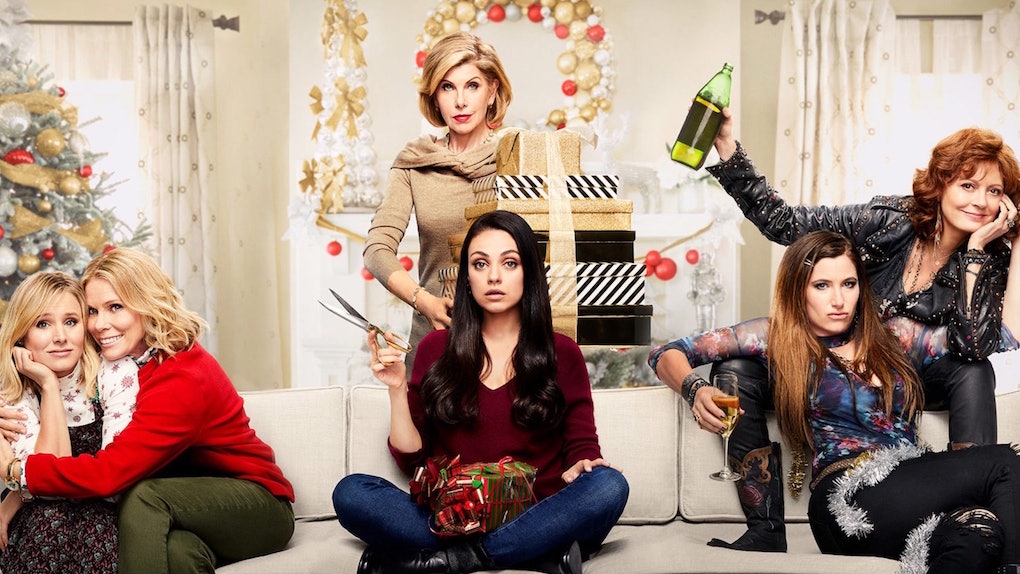 A third Bad Moms movie is officially on the way, but the new sequel will be switching things up from the first two comedies. Rather than centering on the eponymous bad moms from the first two movies, the new film will go up a generation and be all about the bad moms who raised the bad moms. The new Bad Moms sequel is called Bad Moms' Moms, and although it is kind of a clunky title, it sounds like it is going to be a hilarious grandmas behaving badly movie.

STX Films announced the upcoming third Bad Moms movie at CinemaCon earlier this week, revealing that Christine Baranski, Susan Sarandon, and Cheryl Hines will be helming the new movie. Baranski, Sarandon, and Hines will be reprising their roles from A Bad Moms Christmas as Ruth, Isis, and Sandy, the mothers to Mila Kunis' Amy, Kathryn Hahn's Carla, and Kristen Bell's Kiki, respectively. As of right now, those three are the only announced cast members, so it is not confirmed whether Kunis, Hahn, and Bell may co-star or appear in cameo roles in Bad Moms' Moms or not.

The plot of the new movie has also not yet been revealed, but the ending of A Bad Moms Christmas does provide an obvious opportunity for a spinoff centered on the grandmas. At the end of that movie, Ruth, Isis, and Sandy have all bonded over their parenting foibles and become unlikely friends. After a big family dinner with all three families, the three matriarchs announce that they are setting off on a trip to Las Vegas together. It seems like the perfect set-up for Bad Moms' Moms being a hard-partying Vegas vacation movie.

Bad Moms' Moms will be the third film in what is now the Bad Moms trilogy. The original Bad Moms was released in 2016, starring Mila Kunis, Kathryn Hahn, and Kristen Bell as three stressed-out mothers who band together to topple the overly demanding pressures of their childrens' school's PTA. The summer comedy became a surprise box office smash, grossing over $180 million worldwide against a $20 million budget.

The 2017 sequel, A Bad Moms Christmas, introduced Christine Baranski, Susan Sarandon, and Cheryl Hines as their own versions of bad mothers who each ruin their daughters' Christmas celebrations. Baranski's Ruth is impossibly critical of Amy, Sarandon's Isis is emotionally distant and dismissive of Carla, and Hines' Sandy is creepily clingy to Kiki. In the end, though, all of the moms find common ground with both their daughters and with each other, which is the perfect lead-in for Bad Moms' Moms.

In addition to Bad Moms' Moms, STX Films had announced other spinoffs and additions to its Bad Moms universe in the past. Last year, Fox announced it was developing an unscripted series based on Bad Moms chronicling the lives of actual mothers. There was also a planned spinoff movie called Bad Dads that was scheduled to premiere in 2017, but that appears to have been scrapped now.

There's no premiere date yet for Bad Moms' Moms, but look for it later this year or in 2020.

More like this
10 Quotes From Netflix's 'Enola Holmes' That Are So Freaking Relevant
By Rachel Varina
17 Tweets About Simu Liu In The 'Shang-Chi' Teaser, From Proud 'Kim's Convenience' Fans
By Dylan Kickham
Kristen Wiig Is Making A Musical About Cinderella's Evil Stepsisters For Disney
By Dylan Kickham
Stay up to date