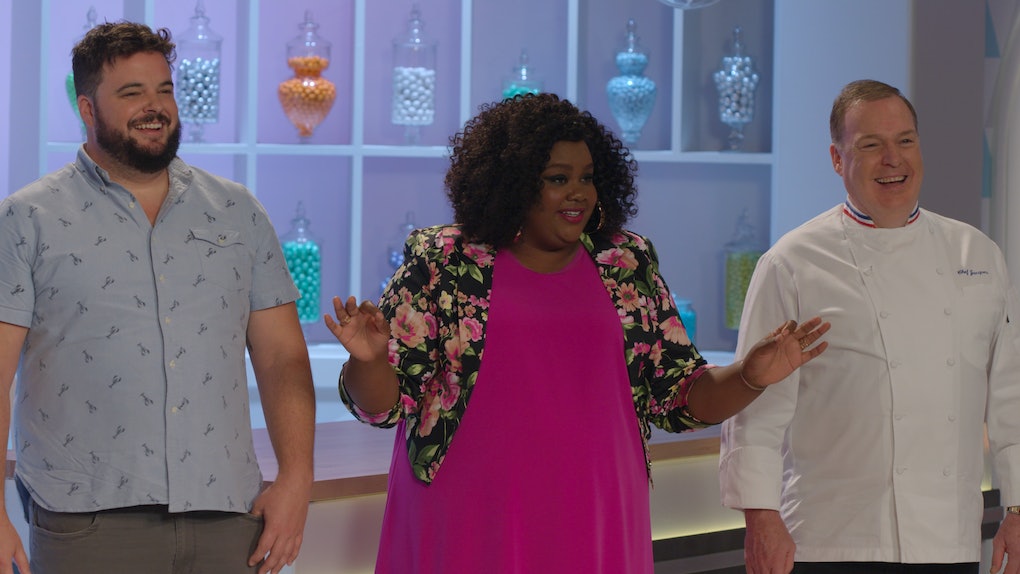 When the world is on fire, an easy solution to deal with the pain is to turn on a warmhearted show about baking and get lost in a sea of fondant and icing. In case you've already binged through The Great British Baking Show and are at a loss for soothing content, rest easy, because the Nailed It! Season 3 premiere date is just around the corner. Get ready to laugh at baking fails and feel good about humanity again!

According to Variety, Season 3 of Nailed It! will launch on Netflix on Friday, May 17. Comedian Nicole Byer and pastry chef Jacques Torres return as hosts judging contestants' often poor attempts at recreating extraordinary baking designs for a grand prize of $10,000. As Byer explained in an interview with Munchies, "[Nailed It! is] an inclusive baking show for people who don’t know how to bake and are baking. We exist to let people know it’s OK to not be amazing. You have to make these things on the show and it’s fun."

The contestants' recreations can be cringe-worthy, but watching bakers laugh over their final products as much as viewers do is always satisfying. Like the people on its Netflix counterpart The Great British Baking Show, Nailed It!'s participants and hosts' humorous, encouraging exchanges with each other manage to calm any mood you might be in before playing an episode. The show's initial success even inspired a Mexican spinoff and a holiday edition, but the Season 3 news might as well be an early Christmas gift. So, how will it stand out from the first two seasons?

In a timely move, the six-episode season will include a tribute to Avengers: Endgame when contestants are challenged to create Marvel-themed cupcakes and a Black Panther cake. Other competitions will have bakers recreating Michelangelo's "David" sculpture, crafting a Napoleon Bonaparte bust, and baking Neanderthal cupcakes and a T. rex cake in a dinosaur-themed competition. The season's special guests include YouTube culinary star Rosanna Pansino, pastry chef Charles Phoenix, and actress Felicia Day.

While traditional cooking competition shows often try to highlight cattiness between chefs, Nailed It! comes from a recent stream of food-related shows providing a sweet escape rather than tense cooking showdowns. In addition to having friendly banter with each other and the bakers, Byer and Torres veer away from ridiculing contestants' work, and the result of doing so is the kind of comedy that fans love.

"I’m encouraging [contestants] because this is their first time they’ve ever attempted to do this, and nobody is perfect the first time they try to do anything," Byer told Munchies in 2018. "If you want to bake, keep baking... I think the humor comes from people working really hard on something and saying, ‘This is what came out.'"

We're reaching the time of the year when it's too hot to even think about turning on our ovens, but here's to living vicariously through a new batch of Nailed It!.

Season 3 of Nailed It! premieres on Netflix on Friday, May 17.