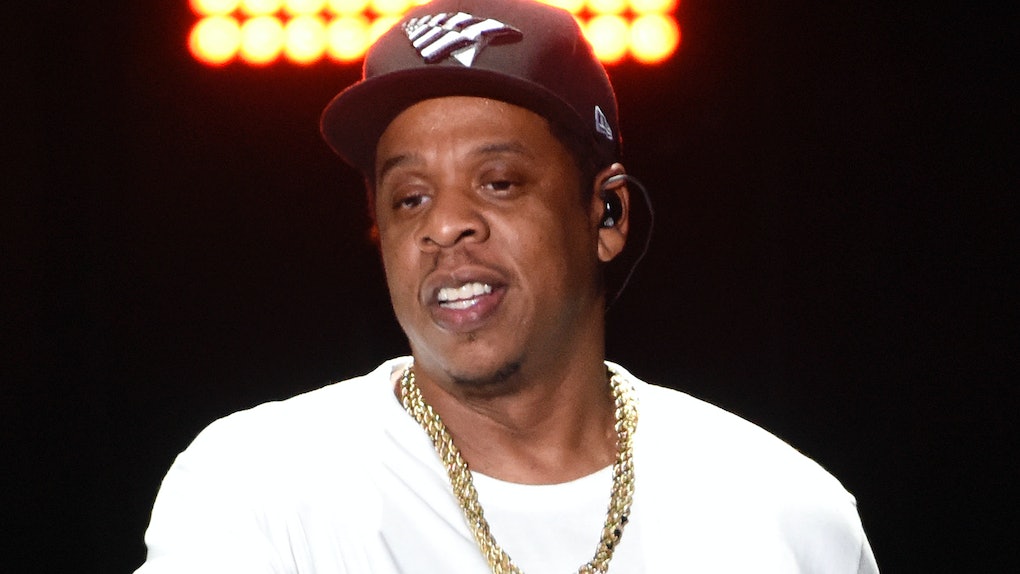 The Meaning Of JAY-Z's "The Story Of O.J." Is All About Racism In America

JAY-Z leads this year's Grammy nominations with eight total nominations, including noms in the Album of the Year and Record of the Year categories. The rapper has been nominated for 66 Grammys over the course of his career and has won 21. Beyoncé has 22, so it's possible he could walk away from this Sunday's Grammys having surpassed his wife's total. 4:44 is a massive album covering heavy-hitting topics such as racism, class separations in black culture, and infidelity. "The Story of O.J." tackles what it means to be a black person in modern America head-on, and its animated music video does the same. The song is up for Record of the Year at the Grammys, so let's unpack the meaning of JAY-Z's "The Story of O.J."

The song starts off with JAY-Z rapping, "Light n****, dark n****, faux n****, real n**** Rich n****, poor n****, house n****, field n**** Still n****, still n****." This line (and the first line in the first verse) is seemingly intended as a callout to black people who attempt to distance themselves from the black community. JAY-Z uses O.J. Simpson as a prime example of this by starting off the first verse of the song by saying, "O.J. like, 'I'm not black, I'm O.J.' …OK." This is a reference to a quote ESPN Robert Lipsyte said in the O.J.: Made In America special. Lipsyte revealed in the special that Simpson once said he was happy a white woman apparently thought he "wasn't black." Lipsyte said,

He overheard a white woman at the next table saying, 'Look, there's O.J. sitting with all those n***ers.' I remember in my naiveté, saying to O.J., 'Gee, wow, that must have been terrible for you.' And he said, 'No. it was great don't you understand? She knew that I wasn't black. She saw me as O.J.'

JAY-Z's long pause followed by that "...OK" makes it clear how he feels about Simpson's comment. He also spends a lot of time in the song telling people it's better to secure longevity for your wealth than it is to get rich quick. With lines like, "You wanna know what's more important than throwin' away money at a strip club? Credit," and "I bought some artwork for one million. Two years later, that sh*t worth two million. Few years later, that sh*t worth eight million. I can't wait to give this sh*t to my children," the rapper is trying to make people understand that money means nothing if you can't make it last and don't use it to benefit others. Making it last means you're able to pass it down to others, like your children, securing financial stability for them and teaching them how to make and keep their wealth through the process.

JAY-Z's "The Story of O.J." lyrics start off with:

Then JAY-Z comes in:

O.J. like, 'I'm not black, I'm O.J.' ...OK. House n****, don't f*ck with me. I'm a field n**** with shined cutlery. Gold-plated quarters where the butlers be. I'mma play the corners where the hustlers be. I told him, 'Please don't die over the neighborhood that your momma rentin'. Take your drug money and buy the neighborhood. That's how you rinse it.' I bought every V12 engine. Wish I could take it back to the beginnin'. I coulda bought a place in Dumbo before it was Dumbo. For like two million. That same building today is worth twenty-five million. Guess how I'm feelin'? Dumbo.

Then comes the chorus again:

You wanna know what's more important than throwin' away money at a strip club? Credit. You ever wonder why Jewish people own all the property in America? This how they did it. Financial freedom my only hope. F*ck livin' rich and dyin' broke. I bought some artwork for one million. Two years later, that sh*t worth two million. Few years later, that sh*t worth eight million. I can't wait to give this sh*t to my children. Y'all think it's bougie, I'm like, it's fine. But I'm tryin' to give you a million dollars worth of game for nine ninety-nine. I turned that two to a four, four to an eight. I turned my life into a nice first week release date, mm. Y'all out here still takin' advances, huh? Me and my n****s takin' real chances, uh. Y'all on the 'gram holdin' money to your ear. There's a disconnect, we don't call that money over here, yeah.

The song closes out with the chorus one more time.

The song and its music video has moved a lot of fans on Twitter ever since it was released in June of 2017, with many saying it helps paint an image of what racism in America is really like today.

"The Story of O.J." music video has a lot to unpack on its own. The black caricatures in the video are seemingly intended to resemble racist imagery from the 19th century that over-exaggerated the facial features of black people (think blackface minstrel shows). JAY-Z's use of these caricatures highlights the lines in the chorus where he's basically saying it doesn't matter how successful you are or how poor you are because your social status means nothing in the eyes of racist people.

The song and its video have garnered a lot of success and praise since the release of 4:44, and it's definitely likely to get JAY-Z his 22nd Grammy. You can watch the 60th Annual Grammy Awards this Sunday, Jan. 28, at 7:30 p.m. on CBS.

More like this
These Songs About Loving Yourself Need To Be On Your Playlist
By Michele Mendez
Is Olivia Rodrigo's "Deja Vu" About Joshua Bassett & Sabrina Carpenter Again? Let's Investigate
By Brandy Robidoux and Michele Mendez
What Do BTS' "Film Out" Lyrics Mean In English? They're About A Past Relationship
By Michele Mendez
Stay up to date