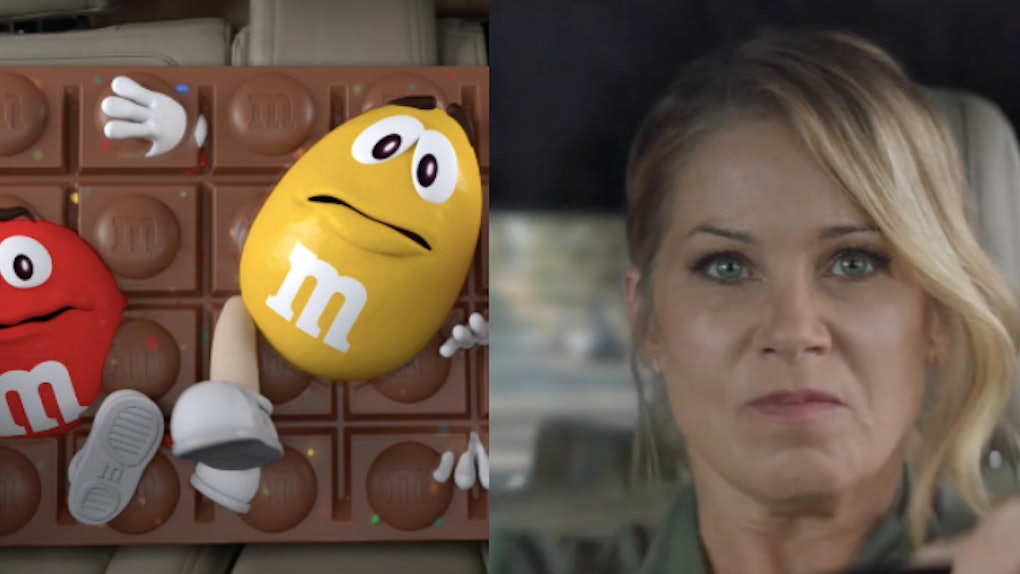 If you're not a big football fan, you probably tune into Super Bowl for two reasons: The Half Time Show and the commercials, which can range from cringey to hilariously meme-worthy. Now, one of your favorite candies is making its Super Bowl LIII ad debut for the first time ever with Christina Applegate in the driver's seat (literally). The M&M's 2019 Super Bowl commercial features some rambunctious passengers in the backseat, a frustrated driver, and a tasty new candy bar, so buckle up for this entertaining ride.

On Wednesday, Mars (the parent company of M&M's) let the candies out of the bag a little early by dropping a 30-second ad featuring Christina Applegate and the brand's newest addition. The video starts by showing the actress driving home from the grocery store while the viewer hears the sound of what could be children squabbling in the backseat, albeit with lower voices.

Applegate grows increasingly frustrated with the bickering, rolling her eyes and shouting, "OK, do I have to break you guys apart?" As the "He started it," and "Stop touching me," continues, she finally slams on the breaks and yells at her passengers, "If you don't stop, I will eat all of you alive right now!"

The chorus in the back finally quiets down, and the passengers are revealed to be Red, Yellow, and Orange M&M's, who are all stuck together in a delicious chocolate bar. If this sounds like one tasty combination, you're in luck, because the treat in the ad mirrors the M&M's Milk Chocolate Bars, which were released just a few months back. Like in the commercial, the shareable milk chocolate bars come embedded with your favorite multi-colored M&M's (you can choose between Peanut, Milk Chocolate, Crispy, Almond, and Crispy Mint depending on your preference), and they all sound absolutely delicious. According to a previous press release from Dec. 7, each bar contains the "ideal ratio of smooth chocolate and crunchy M&M'S Minis" for each bite, so count me in.

"Our fans look forward to seeing our commercials, but they've never seen us like this. That's because this year, we made a decision to use entertainment's biggest stage to debut one of the most notable innovations in our brand's history," Allison Miazga-Bedrick, Brand Director of M&M'S, said in a statement. "The surprising reveal at the end of the ad showcases the colorful fun of our brand in its newest form – M&M'S stuck together in a creamy chocolate bar."

Mars' latest Super Bowl commercial continues the plot just one week after the release of a 15-second teaser that showed that Applegate had gotten locked out of the car during her run at the grocery store, thanks to some mischievous passengers, and was not having it.

Well, according to the newest installment, it looks like the actress finally managed to get in and is more than ready to munch on that M&M's Milk Chocolate Bar in the backseat when she gets back home.

The full commercial will officially air on Sunday, Feb. 3, so expect to see it play on the big screen during the Super Bowl — and maybe keep an M&M's Milk Chocolate Bar (or five) in hand so you can get in on the nomming when the game gets stressful.