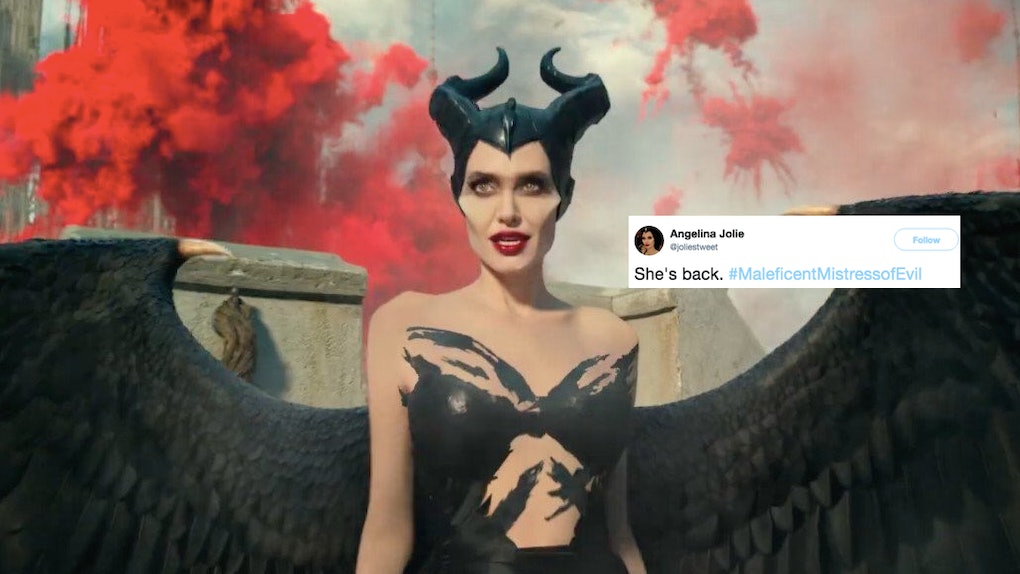 The 'Maleficent: Mistress Of Evil' Trailer Will Make You Love The Disney Villain Even More

The world just saw Dany snap in Game of Thrones, but are we ready to see Maleficent do the same? The answer is yes! The Maleficent: Mistress of Evil trailer is officially here, and it's making fans of Jolie's mystical villain stan even harder. Mostly because Jolie is back as the winged witch and better than ever, but also because Michelle Freaking Pfeiffer is in it! Who knew this was happening?! Am I the only one who learned she was in this by seeing the trailer?! This is everything I need.

Maleficent: Mistress of Evil is set for a November 2019 release, so fans are going to have to wait a while before they can see the full sequel, but this trailer is definitely enough to tide them over in the meantime. Plus, this is only the first teaser trailer, so it's really just a sizzle reel with not that much plot revealed. There will be more trailers in the coming months, so prepare yourselves, people. The mistress of evil is coming.

The trailer starts off with Jolie saying, "I remember the story of an evil witch, and the princess she cursed to sleep forever." A cover of "Season of the Witch" plays throughout the whole trailer, because of course it does. There's even a shot of Aurora pricking her finger on the spinning wheel right in the beginning. There are fairies, woodland creatures, gorgeous nature shots galore, and even a shot of Aurora being proposed to, but things take a darker turn when Jolie is heard saying, "The story became legend, but this is no fairy tale."

Viewers get their first look at Maleficent herself when she walks into Michelle Pfeiffer's throne room and says, "There are many who prey on the innocent. I'm sure your kind would agree."

"If I didn't know better, I'd say you were making a threat," Pfeiffer says, fully decked out in jewels like the queen she is.

"Well, do you?" Jolie says in the most scrumptiously creepy and extra way.

"Do I what?" Pfeiffer snaps back.

This is the season of the witch, indeed.

Their favorite moment by far is a shot near the end where Maleficent whips around with a deliciously evil look on her face and wearing some kind of... bondage look??

We are not ready for the extra as hell amazingness that will be Maleficent: Mistress of Evil.

The trailer doesn't hint much as to what the plot will be, but based on Maleficent's exchange with Pfeiffer's character, it seems as if Maleficent might be spending the movie avenging oppressed magical creatures that the human world mistreats. That would follow her arc from the first movie well, and also give a lot of opportunities for Maleficent to go full-evil-villain mode if/when the creatures she's trying to defend continue to be mistreated. One thing we can be guaranteed, however, is that our girl Maleficent will snap.

I'm ready for you, Mistress of Evil!!

More like this
'Thor: Love & Thunder' Cast, Plot Details, Premiere Date, & More
By Ani Bundel
Here's How To Stream 'Nomadland' So You Can Finally Get The Hype
By Rachel Varina
Is Netflix Making A 'To All The Boys' Spinoff Series About Kitty? Here's The Tea
By Rachel Varina
Stay up to date