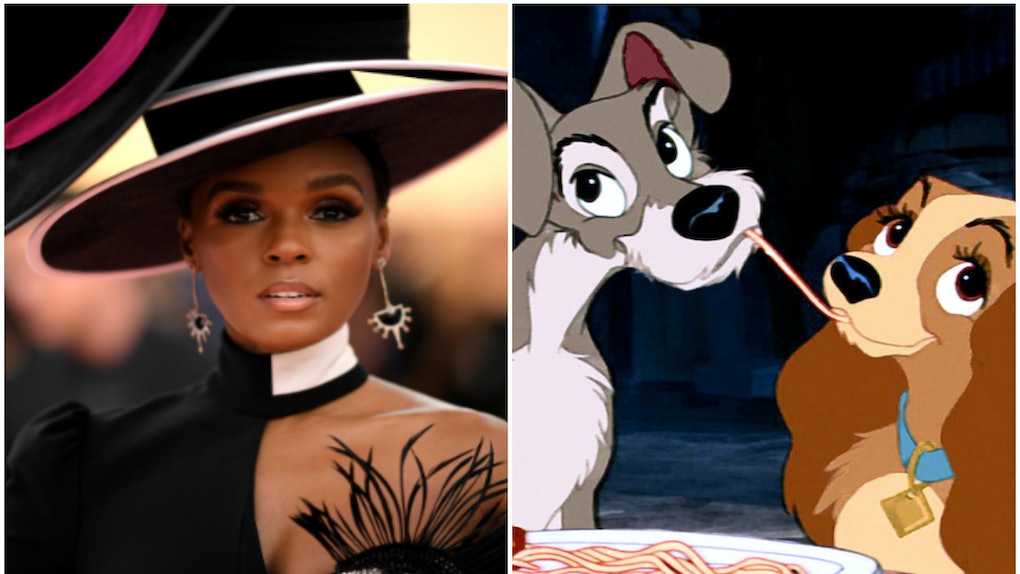 Name a better combination than Janelle Monáe and dogs. I'll wait. The singer was already linked to Disney+'s new Lady and the Tramp movie through a voice role, but she's now contributing in an even bigger way. The live-action Lady and the Tramp will feature new songs by Janelle Monáe, so it looks like my Disney+ subscription is a guarantee now.

ICYMI, upcoming streaming service Disney+ is releasing a live-action adaptation of Lady and the Tramp sometime after the platform's November 2019 launch. The original 1955 animated film followed a pampered cocker spaniel's adventures with a lovable stray dog as they fall in love with each other. Tessa Thompson and Justin Theroux are slated to voice Lady and Tramp, while the supporting cast includes Sam Elliott, Yvette Nicole Brown, and Benedict Wong. Monáe will voice Peg, the shelter dog who fills Lady in on Tramp's persona with the song "He's A Tramp" in the first film.

While it's unclear if a version of "He's A Tramp" will be in the new movie, Variety reports that Monáe will perform two original songs for the project while her label will work on "reinventing" the movie's most controversial song. In Lady and the Tramp, "The Siamese Cat Song" served as an introduction to the mischievous Siamese cats belonging to Aunt Sarah, who comes to stay with Lady when her owners go away. The scene has been criticized for its racist depiction of Asian culture, so the updated Lady and the Tramp is passing on the song for a more inclusive theme.

According to Monáe's label imprint Wondaland, company contributors Nate “Rocket” Wonder and Roman GianArthur are working on a different approach to these feline characters, who are not Siamese cats in the upcoming version. Just because something is a classic doesn't mean it's right, so it's good to hear that the new Lady and the Tramp is taking steps to rectify the original's blunders. It's too early to tell for sure, but with Monáe at the helm, these jams definitely seem worthy of the Disney name.

Like the first film, the upcoming Lady and the Tramp is set in 1910 and has a "blues-ragtime vibe," but sources have told Variety that Monáe's personal sound will still be represented. Her musical involvement is one of the first tidbits fans have heard about the movie since its casting announcements. When the first look at the Disney+ platform was shared back in April 2019, a still from the new Lady and the Tramp was also visible, giving fans a peek at the adorable pups "playing" the titular characters.

Lady and the Tramp will eventually join a streaming library that's set to include Marvel spinoffs, Pixar and Star Wars movies, and several original movie projects. Disney Channel series and original movies are also expected to be available upon launch alongside tons of other films within the Disney branch. You can access this content with a Disney+ subscription running for only $7 a month.

Disney+ launches on Nov. 12, 2019. Lady and the Tramp is expected to premiere on the streaming service soon afterwards.