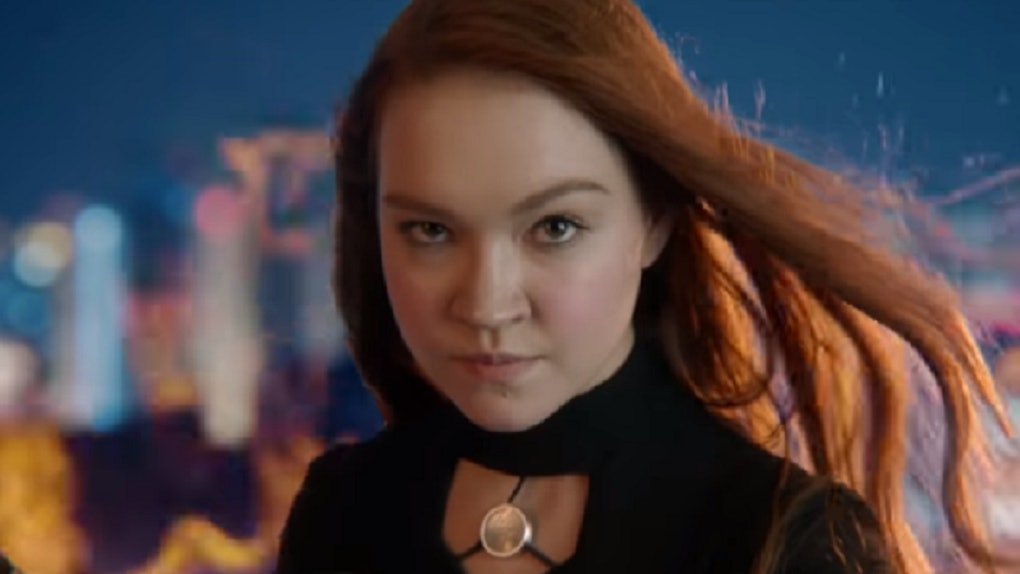 You'll want to call or beep your friends ASAP, because every '90s kid's childhood is officially alive and well thanks to an upcoming Disney Channel Original Movie with a throwback twist. If your Disney-watching heyday was in the early 2000s, you probably haven't tuned into the network recently, but you definitely have a reason to now. The live-action Kim Possible trailer is here, and the clips are the perfect dose of nostalgia for anyone wishing that cargo pants and jet packs were an acceptable style choice outside of Kim's cartoon world.

Starring newcomer Sadie Stanley in the titular role, Kim Possible is based on the hit animated series that ran on Disney Channel from 2002 to 2007. The original show led to two animated TV movies, but for her 2019 return, the crime-fighting character is getting a live-action makeover. Debuting on Disney Channel on Feb. 15, Kim Possible will follow Kim through her tricky freshman year of high school. Alongside her best friend and crime sidekick Ron Stoppable (The Goldbergs' Sean Giambrone), Kim soon faces the threat of supervillains from her past disrupting the world. With her friends at her side, Kim must try to defeat Dr. Drakken (Todd Stashwick), Shego (Taylor Ortega), and other foes before Drakken finds a way to quench her strength.

The trailer promises plenty of action sequences, mirroring some of what fans of the cartoon loved most about the fierce character. Even if you think a Disney Channel flick isn't worth tuning in for, the movie also contains cameos from familiar, well, voices. Patton Oswalt reprises his role as the villain Professor Dementor, while the original voice of Kim and early '00s mainstay at Disney, Christy Carlson Romano, is slated to appear in an unknown role in the movie. At the time of her casting announcement, Romano wrote on Instagram, "I can't say too much about my involvement yet, but I'm very excited to help usher in the strong, empowered female character I helped bring to life to a new generation."

Earlier this month, Stanley also directed fans' attentions to first look photos of the cast in costume via her Instagram page. While they're not exact replicas of their animated counterparts and are showing off slightly different outfits, Stanley and Giambrone as Kim and Ron totally pluck at nostalgic heartstrings. If you ask me, the vision will feel complete if Giambrone has a chorus of "Naked Mole Rat" planned for the film.

In a press release, Judy Taylor, the senior vice president of Casting and Talenting Relations at Disney Channel, said about the young actors:

Sadie delivers Kim’s confidence, smarts, and agility; most importantly, she’s an everyday girl with an extraordinary spirit. Sean is such a magnetic actor; he always finds the right balance of physical comedy and heart. We’re excited for audiences to see Sadie and Sean bring these iconic roles to life.

In April 2018, Romano and Will Friedle, the voice of Ron, helped announce Stanley and Giambrone's casting through a video in which they pretended to audition for their old roles. Despite his involvement with the announcement, Friedle doesn't appear to be locked in for a Kim Possible cameo, but here's hoping for a quick appearance that Disney is keeping under wraps.

Even if Friedle isn't spotted onscreen, we definitely feel hopeful about the new Kim Possible story capturing the magic of the original cartoon. Kim Possible premieres on Friday, Feb. 15, at 8 p.m. ET on Disney Channel and DisneyNOW.

More like this
Emma Stone's 'Cruella': Premiere Date, Trailer, Cast, Plot, & More
By Abby Monteil and Dylan Kickham
This Video Of Disneyland's Marvel's Avengers Campus Is Super
By Cianna Garrison
8 Disney-Themed Charcuterie Board Ideas To Add Some Pixie Dust To Your Movie Night
By Rachel Chapman
Stay up to date