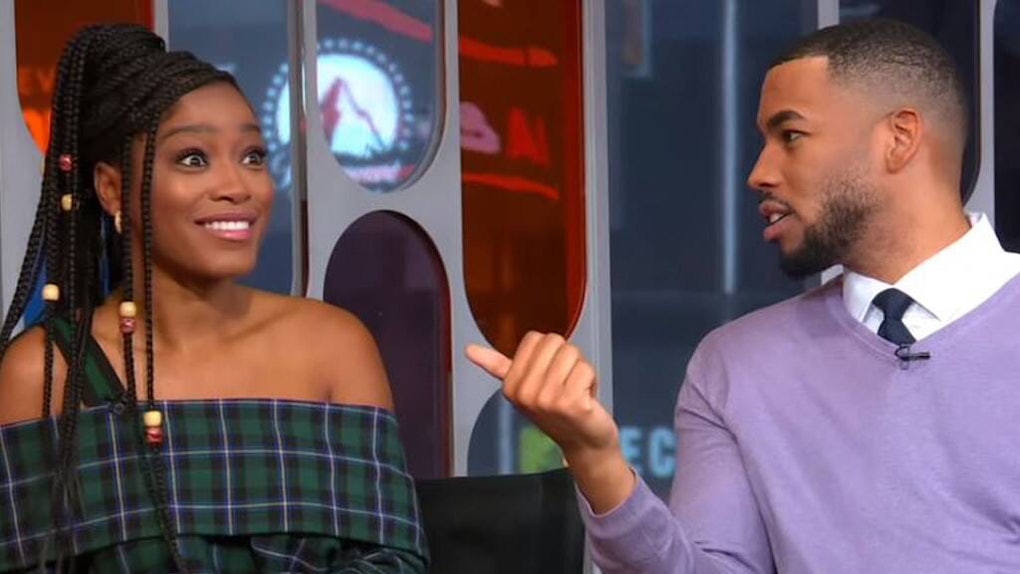 It wasn't too long ago that Mike Johnson was making headlines for his crush on Demi Lovato. Those days seem long gone, though, as The Bachelorette alum appears to have his eye on another star: actress and TV host Keke Palmer. And he didn't waste too much time before making a move. Johnson, in fact, dropped a not-so-subtle hint on Palmer's show on Oct. 14, with co-hosts Michael Strahan and Sara Haines right in front of him. Suffice it to say, Twitter made a day of it. These Keke Palmer and Mike Johnson memes and reactions are hilarious.

"Big Mike," as he's known on Bachelor Nation, was a guest on Strahan, Sara and Keke, a talk show reporting on top headlines from Times Square. Johnson said that he's dated in the public eye before —referencing his time flirting with Lovato — and that he'd prefer to be more private about his love life in the future.

Palmer, however, didn't let him off the hook that easy, asking, "So, what made you do a kiss and tell moment, was it like a slip of the tongue?" Johnson called his kiss and tell a "mistake," said that he apologized "to the people that I needed to apologize to," and reaffirmed his stance on openly speaking about his love life. Immediately after, however, the reality TV star turned to Palmer and asked, "But if I were to ask you if we could go on a date in the public..."

Everyone, including the actress, was surprised. She looked at her co-hosts for help, who didn't seem in a hurry to help her out. "What's the next question?" Palmer asked them a couple times before eventually responding to Johnson with, "I'm at work!"

1. Palmer Made Fun Of Her Own Expression Later On

Not only did Palmer retweet lot of the memes she caused with her wide-eyed stare, she made one herself. And if, for some reason, her reaction didn't tell everyone how she'd RSVP to the date invite, this tweet definitely did. Sorry, dude.

2. When You May Or May Not Have Something To Hide

You're so reluctant to do it because you're afraid he'll see the surprise couple's trip you planned for the upcoming weekend, right? Thought so.

3. TFW You Definitely Should've Gone Into The Doctor's Office Unaccompanied

Whether your mom is or is not in the office with you, always have protected sex, guys. Always. Safety first.

4. When They Don't Get It That It Was Just A Hookup

*Regina George voice* "Why are you so obsessed with me?"

5. When They Don't Understand That Being A Bomb, Like You, Takes A Bit Of Time

In the words of great Marilyn Monroe, "I told you I'll be ready in five minutes, stop calling me every half hour."

6. When They Get Separation Anxiety, All Of A Sudden

7. When You Realize You Haven't Been On The Same Page This Whole Time

This one is just as funny as it is sad — and so spot-on. When the feeling isn't mutual, boy, does it sting.

8. When They Wanna Be Thorough For No Reason

It'll be an awkward moment — can't sugarcoat this one. Don't let him guilt you into giving him your real one, though.

9. When Someone Just Won't Wait

You'll say it back when you're ready to say it back... if that moment ever comes.

10. When She Just Responded To Mike's Question Again

This one, retweeted by Palmer, exactly recreates the very similar situation at hand. No dude, she doesn't want to be with you.

This wasn't Palmer's first time becoming meme-famous and it probably won't be her last. With her quirky personality, candor, and sense of humor, the actress will undoubtedly keep producing meme-able material until Amazon starts selling Keke Palmer's famous meme-themed calendars. And you know I'll be adding them to my cart ASAP.