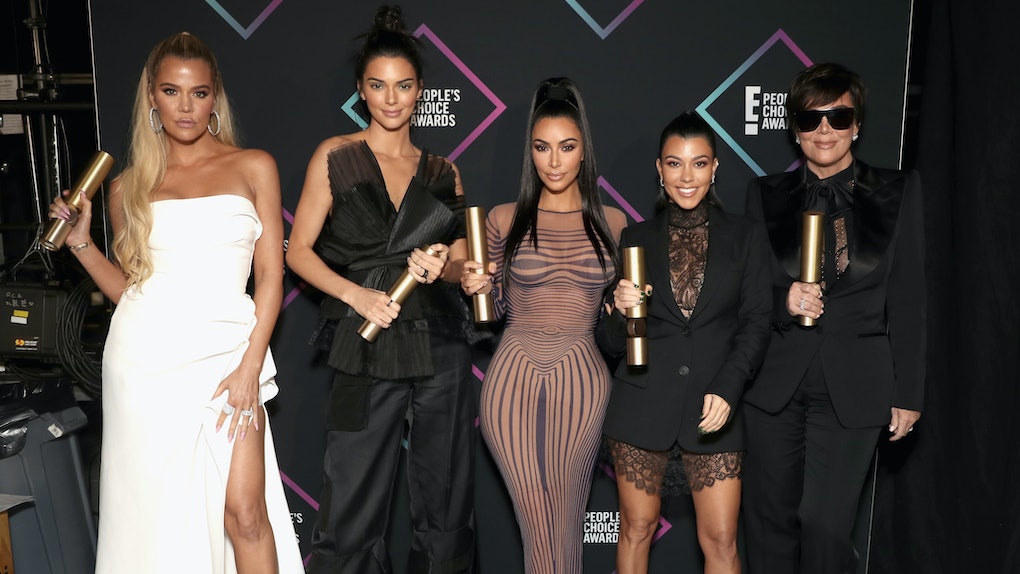 The Kardashians’ Thanksgiving Posts Reveal They Split Up For Turkey Day

Keeping up with the Kardashians on Turkey Day was a little harder this year for fans, due to the fact that the clan decided to split up to celebrate. However, the Kardashians’ Thanksgiving posts show that while they might have been on different sides of the globe, they still had the family on their mind as they rang in the holiday. Here's what everyone was up to this year.

Over in Calabasas, Kylie and Kendall Jenner got the holiday started on the most luxe note possible, courtesy of a private jet. Kendall took to her Instagram Story to reveal that her little sister was picking her up in the plane before they headed over to momager Kris Jenner's house to ring in the festivities in style.

Both sisters documented their evening's activities on social media, which included donning fun reindeer antler headbands, digging into an impressive Thanksgiving spread, hugging their mom by the fireplace, and drinking plenty of wine. In short, it was a surprisingly relatable Thanksgiving for Kris and her two youngest daughters. Kylie took to her Instagram Story to share a photo of the trio from their celebration, writing, "I hope everyone had a beautiful Thanksgiving."

Unlike years prior, fans might have noticed that the three older Kardashian sisters weren't in attendance at the Calabasas dinner. Judging from Kim and Kourtney's Instagrams, they decided to jet off to Tokyo for the holiday.

Kourtney took to the social media platform to share several photos from her vacation, which included relaxing in a pool at night and modeling some black leather pants in the hotel room.

Meanwhile, Kim's Instagram Story showed that she was taking in the sights of Tokyo, including checking out a cool art exhibit at the teamLab Planets in Japan's capital. Husband Kanye West and her kids North, Saint, Chicago, and Psalm could be seen in her photos and videos from the event.

Meanwhile, Khloé opted for the most low-key celebration out of her sisters, which included hanging out with her daughter, True, and an early morning workout.

On Turkey Day, she took to Instagram to share a photo of her kissing her child through the glass, writing, "Everyday I give thanks that I was chosen to be your mommy! I’ll never ever take this role for granted! Thank you Tutu! I will easily love you until the end of time!"

She also alerted her fans that she was going to be off the grid for the holiday on Twitter.

"Hi loves!! I hope you all are enjoying every moment with your loved ones!!" she wrote. "Slow down and take in every moment! I’ve been staying off my phone and living in every minute with my baby. Time seems to be going by faster and faster. Happy holidays."

The Kar-Jenners might have been physically apart this Turkey Day, but it's clear from their posts that family was definitely on their mind and they were feeling pretty thankful for each other as they rang in the holiday.