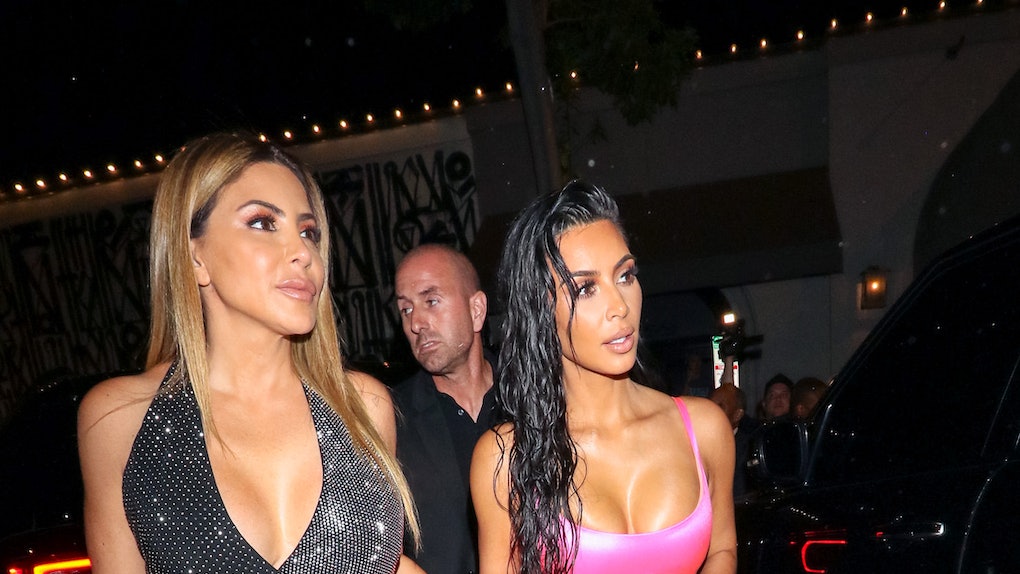 There was a time when Larsa Pippen was practically family to the Kardashians. She was especially close with Kim and Kourtney, vacationing with them often and being their shoulder to lean on during Keeping Up With the Kardashians. But eagle-eyed fans noticed that, sometime in 2020, the Kardashian-Jenners and Pippen distanced themselves from each other. The friends, who once posted BFF selfies constantly, even unfollowed each other on Instagram. While it's clear the friendship is over, the Kardashians and Larsa Pippen's quotes about each other through the years make their fallout all the more shocking.

The Kardashians' absence at Pippen’s 46th birthday party in July 2020 set off speculation that something was up between the old friends. That's when super-sleuth fans noticed all of the members of the KarJenner family had hit the unfollow button on Pippen’s Instagram page and vice versa. The Kardashians have remained mum about what went down, but Pippen has since spoken up about the situation.

At first, she kept things cryptic, seemingly addressing the drama indirectly through a July 22 IG Story, writing, "I woke up this morning blessed and see that everybody is focused on who I am following and who I am not following on social media. I am focused on my children, my new fitness brand Larsapippenfitness, and my relationships in real life." Her statement didn't confirm any drama, but it certainly didn't deny it either. To fans, it was solid evidence.

A few months later in November 2020, though, Pippen shared more comments that confirmed the drama, throwing out some pretty controversial accusations toward Kanye West in the process. It’s still hard to believe, given there was hardlyever a ripple in the Kardashians' once picture-perfect friendship with her. Just check out their gushy quotes about each other over the years.

In 2014, Kim dropped the first hint she and Pippen had become majorly close. In one of her blog posts, she gushed about how Pippen was a fountain of wisdom when it came to raising kids, since Pippen is mother to four children — Sophia, Preston, Justin, and Scotty. “I always call my friend Larsa Pippen for parenting advice!” she said in the post.

When Pippen’s birthday rolled around in July, Kim celebrated by praising her friend's authenticity. "Missing my birthday boo @larsapippen happy birthday to the realist [sic] person I know! I know your bday was yesterday lol."

July 2016: They Inspire Each Other

By this time, Pippen had become close with the entire Kardashian family, and Kourtney sent her IG love as well. "Happy birthday to my fly as hell boo! I am so happy I got to celebrate with you today and for the past two weeks lol. I love you so much!" she wrote.

October 2018: They Make Each Other Proud

When their friendship was at its best, Kim and Pippen never let the important days slip by without celebrating. In honor of Kim's 38th birthday, Pippen had the kindest things to say about her. “Hbd boo you’re an amazing friend, entrepreneur, and mom I’m so proud of you!!!! Love u till the end,” she captioned her Instagram post.

April 2019: Larsa Kept Tabs On All The Sisters

Pippen became such a big part of the Kardashians' life that media outlets knew she was always a solid source for intel. In April 2019, Us Weekly asked Pippen for an update on Khloé's well-being following her drama with Tristan Thompson, which Pippen was happy to provide. She revealed Koko was doing "great," adding she was "amazing."

Pippen spoke out about Tristan Thompson's February 2019 cheating scandal when chatting with Jason Lee on his podcast, Hollywood Unlocked UNCENSORED. During the interview, Pippen revealed she was one of the first to know about the NBA player's infidelity.

"I called Kim. She didn't believe me," she said. "She was like, 'No way. There's no way.' Then, we called Kourtney and Kourtney was like, 'Yeah, I believe it.'"

October 2019: Larsa Expected To Be Friends For Life

When Kim turned 39, Pippen showered her with birthday love. "Happy bday boo bear!! I love you so much, we’ve been thru everything together. You’re my Bestie for life❤️. The best is yet to come," she wrote under an IG mirror selfie with her friend.

That same month, in a Season 17 episode of Keeping Up With The Kardashians, Pippen got caught up in an ugly spat with Kourtney and several of her friends on a trip to Turks & Caicos. During a night out, Pippen got combative when speaking with another one of Kourtney's friends, and Kourtney called her out.

"Larsa is being really stubborn," Kourt told the cameras. "I normally just wouldn’t keep going, I’m so not in the mood for confrontation, but I don’t want Larsa to think it’s OK to talk to my friends that way."

Later in the episode, Kourtney told Pippen they might be in "different places" in their lives, but praised her for understanding where she was coming from. "Even if we're at different places in our lives, she'll still always be one of my best friends," Kourtney said.

By November, Pippen and Kourtney had patched things up and were posting photos together.

At the end of 2019, Pippen opened up about how she admires not only Kim, but also the relationship she has with her husband. Pippen praised Kanye West and Kim's bond during a Dec. 5 interview with Us Weekly.

“They’re the same person,” Pippen said. "They’re both hardworking. They’re lovers. They love each other. They’re best friends and I feel like in today’s world, you almost have to be with your best friend. It’s the only thing that lasts. … I feel like that’s what I’m looking for, a best friend.”

Fast forward a year, and Pippen seemed to be singing a different tune about West. During a November 2020 appearance on the Hollywood Raw podcast, Pippen revealed there was, indeed, a fallout between the Kardashians and herself, and claimed it stemmed from West turning the family against her.

"[Kanye] has literally brainwashed the whole family," she said. "I don't even know. He talks so much about me being this and that and this and that."

Pippen pointed out how tight she and West once were, saying, "[Kanye] used to call me at four, five, and six o'clock in the morning. I was the person that would take his calls when he wanted to rant. I would listen to him. I would be like, 'I love you, you’re the best, things will get better.' I was his go-to person to call when he wasn't happy with X, Y, and Z.” However, Pippen explained the opposite could be said now. “Maybe because I blocked him on my phone because I couldn't bear taking his calls anymore. I can’t, I’m drained. So, I blocked him on my phone.”

The year 2020 was full of astonishing moments, and the Kardashians’ fallout with their long-time bestie was definitely one of them. While the ladies' past quotes have a lot of love packed into every word, their sudden friendship halt seems to be indefinite.

This article was originally published on Aug. 13, 2020