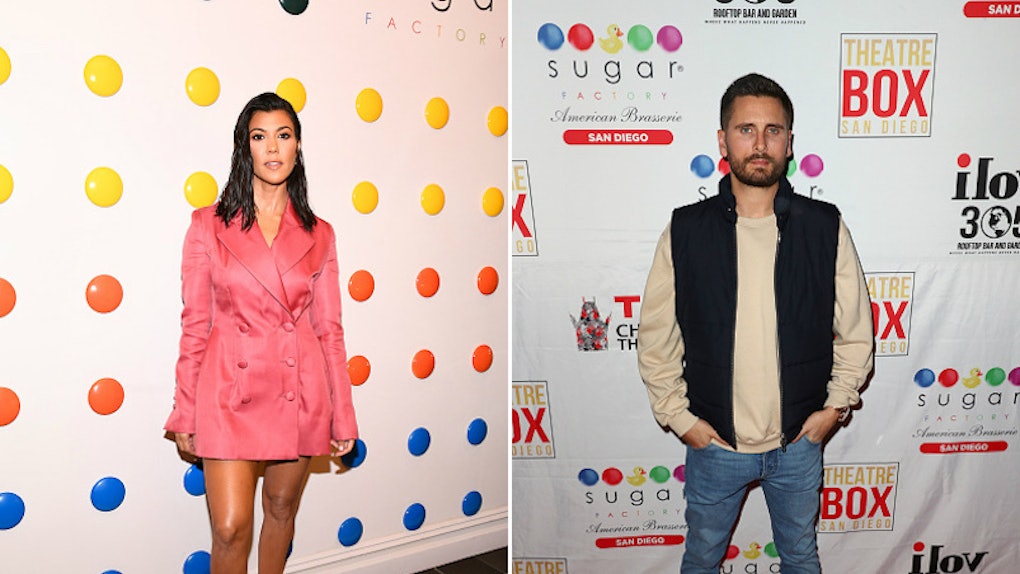 Scott Disick has been a member of the Kardashian-Jenner clan for as far back as most of us can remember. As the on-again-off-again beau of Kourtney Kardashian, audiences grew to love his presence on Keeping Up With The Kardashians, because Disick had a knack for saying exactly what viewers were thinking. The Kardashian family's quotes about Kourtney and Scott are surprisingly positive, considering the ups and downs that have transpired between the former couple. And while his relationship with each individual Kardashian is different, it appears that his overall connection with the family has managed to stay on solid ground.

After all, when it comes to co-parenting three kids, having family support can be really important. So, it's cool to see that regardless of all the drama that's happened between Kourtney and Scott, the exes have still been able to put their kids first. Disick was even invited to one of the most recent family vacations to Bali. Of course, it probably wasn't an easy decision for Kourtney to make after some of Disick's behavior on past trips. But, yet again, Kourtney proved that she's strong AF and allowed him back into the inner fold. Based on their quotes about Scott, the Kardashian-Jenners have shown that there's not too much bad blood between them.

"Scott's turned into the most amazing young man, and the best dad," Kris told Oprah in a 2012 interview on OWN. "When you go through adversity with someone, it brings you close." Even after Oprah repeatedly asked whether or not Scott's irresponsible behavior had appalled her, Kris stuck to her guns. "No," said Kris. "I just thought he was young."

Shortly before Kourtney and Scott split in 2015, Khloé revealed to Complex magazine that she believed Scott's love to be totally genuine.

"You can’t deny how much he loves Kourtney, and I do think he tries … We’re very much involved in each other’s lives."

3. Kim thinks their split was for the best.

During the Bali trip, Kim revealed that she believes their split may have really been for the best, even if they were soulmates. “I like Kourtney and Scott being separate,” Kim told Kourtney on Season 16, Episode 4 of KUWTK. “You can have soulmates in your life but then reality sets in, and I do think they are separated for a reason and I hope things don’t get awkward.”

In April 2019, Kourtney told Ellen DeGeneres that Scott's really been making an effort to put the kids first and checks in on her regularly. "He definitely makes it clear that the kids are his priority and he checks in with me every morning, throughout the day, every night, just to make sure that I'm good and that the kids are good, and it's such a nice change — he's finally grown up."

Sometimes, when a relationship doesn't work out, getting your family to forgive your ex can be one of the hardest parts. Unfortunately, this can be true long after you've yourself have moved on from the breakup. It's so great how supportive the Kardashians have been about Kourtney and Scott co-parenting together. Here's hoping things continue to go well!