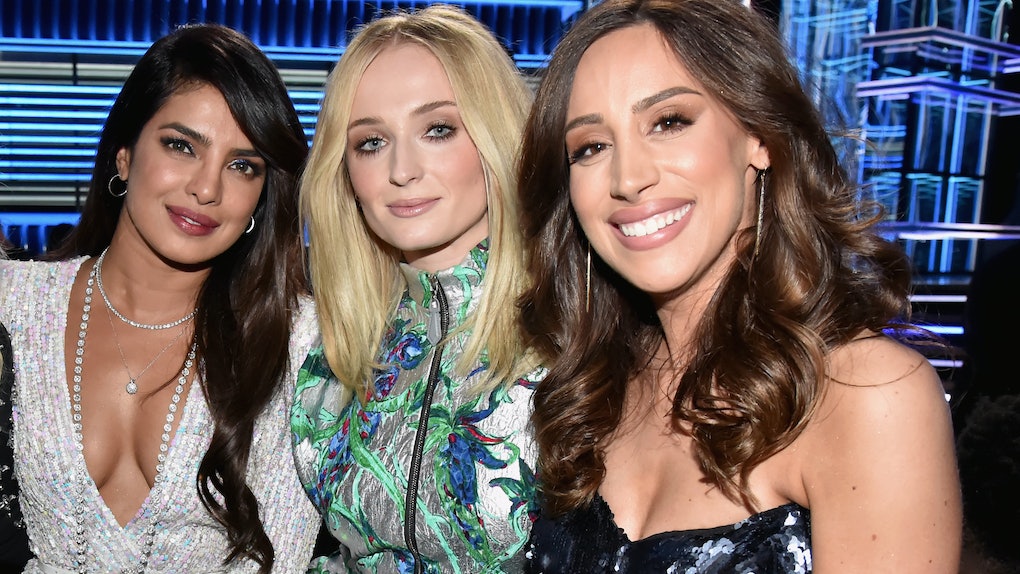 It's a big day for Jonatics. Nick, Joe, and Kevin Jonas just secured a Grammy nomination for Pop/Duo Group Performance — their first in over a decade — and no one is happier for them than the Jonas Wives. Sophie Turner, Priyanka Chopra, and Danielle Jonas' reactions to the Jonas Brothers' Grammy nomination are absolutely priceless.

On Nov. 20, The Recording Academy of Arts and Sciences announced the artists up for awards at music's biggest night. The JoBros have gone 10 years without any Grammys recognition after their first nomination for Best New Artist all the way back in 2009, but their 2020 nomination for “Sucker" changes that, and their wives are so excited.

Joe Jonas took to Instagram to share the news with his fans, uploading a video captioned, "10 years later we are nominated again for a Grammy. Thank you!" The clip featured Turner and his team reacting to the news. Sophie excitedly squealed "What!" upon finding out her hubby's honor. She also took her celebration to her Instagram Story (and so did Kevin's wife, Danielle).

You can tell Turner and Danielle are seriously proud of their husbands. Listen to Turner shriek with joy over the bros' nomination below:

And check out her and Danielle's supportive AF Insta Story posts:

Chopra was just as ecstatic about the news, uploading an adorable video collage of the band recording in the studio, with the caption, "So proud of you Jonas Brothers." Chopra also shared the video on Twitter, amassing an outpouring of love from fans of the pair.

Literally, followers responded with adorable gifs, including the incredibly cute moment when Nick kissed Chopra in the middle of performing "Sucker" at the 2019 Billboard Music Awards.

The Jonas Brothers' "Sucker" is up against Ariana Grande and Social House's "Boyfriend," Lil Nas X's "Old Town Road" featuring Billy Ray Cyrus, Post Malone and Swae Lee's "Sunflower", and Shawn Mendes and Camila Cabello's "Señorita" for best Pop Duo/Group Performance at the 2020 Grammys. The competition is notably stiff, so there's no telling who'll come out on top. But if the JoBros do win on Jan. 20, it's nearly guaranteed these ladies will be in the audience to cheer them on, as usual.