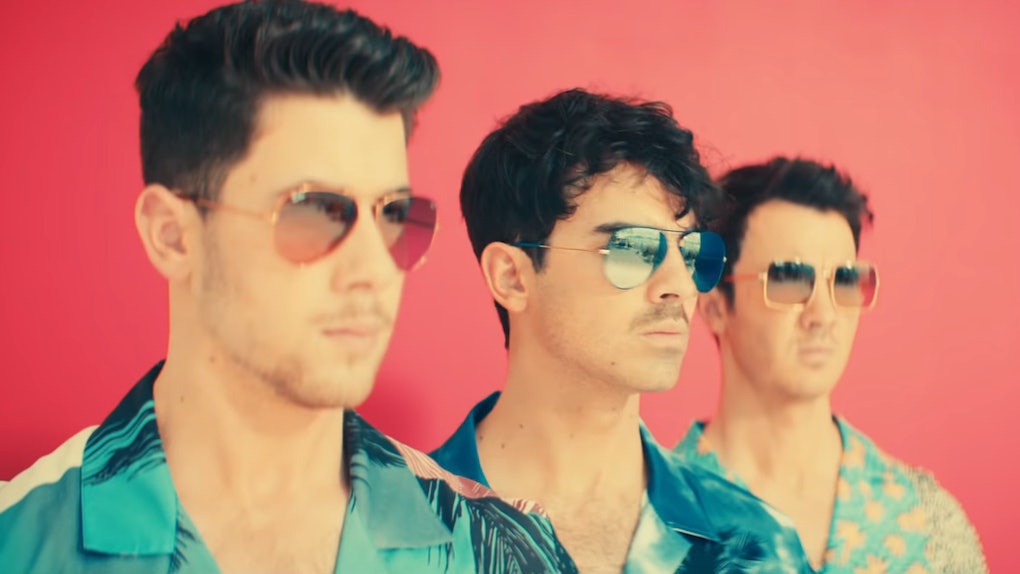 I hope you guys are ready to slip back into the lava. Because the Jonas Brothers are here with a brand new smokin' single. And while it may not be burnin' up, it's definitely cool. That's right, JoBro fans — the boys' new song, "Cool" just dropped, and I cannot stop listening to it. Is this going to be 2019's official song of summer? I think it just might be. I mean, the tune's got a fun and upbeat beach party vibe, and the trio shot the video in a Miami, so it kind of makes perfect sense, you know? Plus, there's the fact that the Jonas Brother's "Cool" lyrics are so damn catchy. Can you stop singing them? Because I can't.

"Cool" is the trio's second release since officially reuniting after calling it quits six years ago. That is a long freaking time. But it didn't seem to matter, because fans (hi there!) were so here for the comeback. The Jonas Brothers' first song "Sucker" was released on March 1 and quickly rocketed to Number 1 on the Billboard Hot 100 chart. Now "Cool" is here, and 20 bucks says it'll do the exact same thing.

But never mind all that. Let's talk about the song's artwork for a quick sec. It's soooo Miami Vice, you guys! Nick, Joe, and Kevin are rocking aviators and Hawaiian shirts against a bright turquoise background. All that's missing is a pet alligator named Elvis and two guys named Crockett and Tubbs.

Dayuuuum. Who turned the temperature hotter?

Oh, and recognize that font? Yeah, of course you do:

If you're a true JoBro fan, you'll remember that the boys' video for "Burnin' Up" back in 2013 also featured a segment that seemed to be a take-off on the iconic '80s crime drama that made pastel suits a thing.

So will Rick Lava make an appearance in the video for "Cool?" Is the new song a counterpart to "Burnin' Up?" Will all three boys be playing MTV cops? I have so many questions!

Head on over to YouTube to find out for yourself, but in the meantime, take a dive into the "Cool" lyrics, because they're truly cool.

From top to the bottom, just cool

Every little thing that I do

I comb my hair like an old school sheen

Standin' there with the red dress on ya

Is it me or am I just havin' a good year?

Every little thing that I do (Do)

It's like, ooh (Ooh), maybe I should bottle my moves (Moves)

Sell 'em for a dollar or two (Two)

Must've done something right 'cause all these

Lights are green, man, they look like palm trees

And every time that song comes on it's about me

And now that we've made it, how complicated was last year?

I comb my hair like an old school sheen

When I grow up, I wanna be just like me