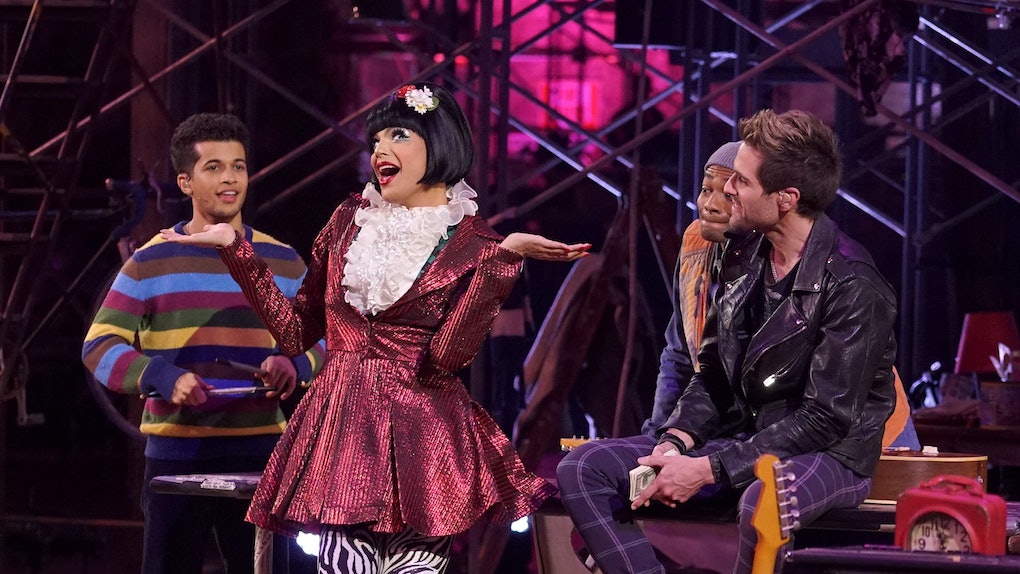 The Joke About Mark's Sweater In 'Rent: Live' Had Rentheads LOLing

There are many things about the original Rent which have become iconic, but none so much as the costumes. Mark's iconic outfit in particular, with his scarves and his sweater, was one audiences remember very, very well. Rent: Live changed up the outfits, making them a little more updated for the times, but not that much. The show didn't want to mess too much with perfection. But that didn't mean there weren't nods to what the fans wanted. The joke about Mark's sweater in Rent: Live shows the designers and props people who put the show together wanted to throw in an easter egg or two for the hardcore fans.

Here's the thing for those who weren't around for the 1996 run of the show. Mark's sweater was iconic because it was ugly. It was loud and the opposite of trendy. After all, the apartment he lives in is not warm, and it's not like he exactly has a big clothing budget. The sweater doesn't even look that warm, and yet he wears it everywhere.

Productions of Rent since the show became a hit strive to get something as close as possible to Mark's sweater. In the case of Rent Live, they actually changed it up pretty substantially. It's still a eye-searing piece of clothing, but it's rainbow striped.

But just because the new Mark was wearing a different look, didn't mean the old sweater would be forgotten. In fact, it showed up in a hilarious tribute. During a scene in which Angel is buying Collins a new coat from a street vendor, the show gave a little nod to the original costume. As the vendor shows one coat after another, Angel shakes his head no, no, no to each offering. Then, the vendor brings up an instantly recognizable piece of clothing: Mark's classic sweater. (It got shot down too.) Check out the gif of the hilarious moment:

Also, note how dirty the sweater is, as if it's spent 23 years of hard wear on Marks all over the country playing the lead in Rent. For those who are curious here's the original Mark, Anthony Rapp, in the original, with his totally mismatching scarf.

For the record, Rentheads had, up until that point, not been so impressed with Rent Live. Part of it was no one's fault, Brennin Hunt broke his ankle the night before the show, and so the first act was pre-taped, and yet the singing wasn't always on key.

There were also lots of changes to make the show more palatable to home audiences watching the show for perhaps the first time. Curse words were swapped out for things like "crap." (In fact, at one point they cut the phrase "poo-poo," which was just strange.) And of course, the fact that the show changed the costumes instead of going with some of the iconic looks upset the very hardcore, who couldn't deal with Mark "wearing the wrong sweater."

So seeing the original costume was, for some, the highlight of the first half of the show.

It might not have totally made up for cutting lines or changing up song lyrics, but it's good to know someone is thinking of the Rentheads at home.