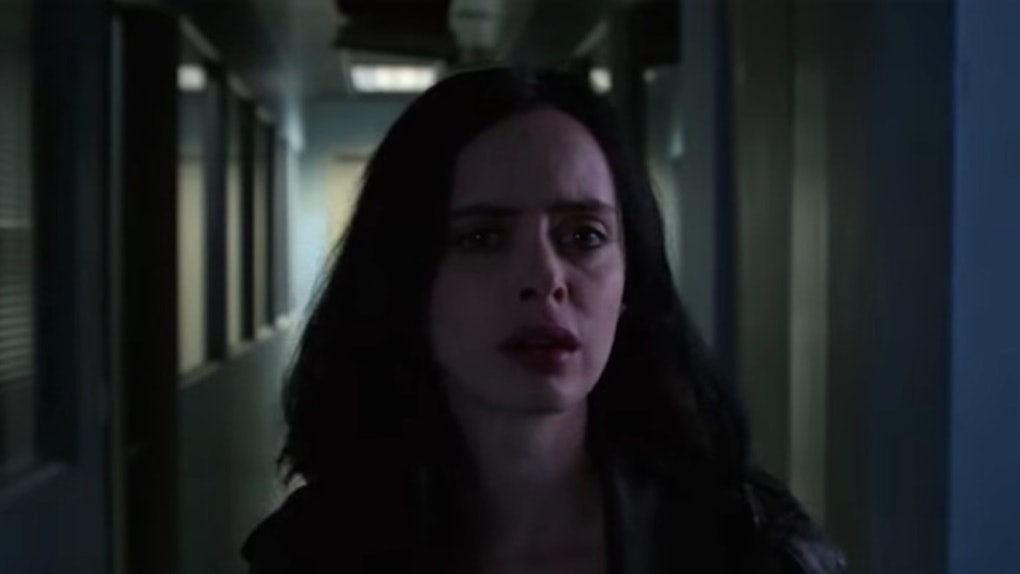 The 'Jessica Jones' Season 2 Trailer Is Here & It's So, So Intense

Finally, you can breathe a sigh of relief. Season 1 of Jessica Jones premiered on Netflix ages ago in 2015 (Stranger Things didn't even exist back then!), but the highly-anticipated second season is officially on its way. The Jessica Jones Season 2 trailer was just released after a whole lot of fan waiting, and it does not disappoint. Everyone's favorite former superhero/private detective/all around badass is returning for more "super vigilante" action, and she wants answers.

The trailer kicks off with — what else? — Jessica drowning her sorrows at a bar. We're reminded that the brilliant Krysten Ritter does broody sarcasm better than anyone else, but she also kicks some serious ass in the process. Jones is a complex heroine with a layered origin story and it looks like this season will find Jessica piecing together the puzzle of her tragic past. "I have 17 years of questions and they are deep," she says. Oh, man. She's making one of those Homeland-like clue walls of information! It's getting real.

Following a deadly car crash that killed her family, Jones was subject to horrific experiments that ultimately gave way to powers like superhuman strength and expert fighting prowess. But she might not be alone. "How many others are there, like me?" Jessica asks in sneak peek clip. This anti-hero means business.

According to Digital Spy, the synopsis for Season 2 reads:

New York City private investigator Jessica Jones (Krysten Ritter) is beginning to put her life back together after murdering her tormenter, Kilgrave. Now known throughout the city as a super-powered killer, a new case makes her reluctantly confront who she really is while digging deeper into her past to explore the reasons why.

In addition to figuring out just exactly how she came to be and if there are others who share her story, Jessica also has pesky villains to contend with. It looks like she'll be battling with a rival who wants to absorb Alias Investigations. And to top it all off, there's a killer on the loose. "It takes a monster to stop a monster," Jessica declares in the trailer. We also get glimpses of an explosion, an arrest, and a new sidekick. We're so in.

“We’re always digging deeper into Jessica’s character and this season we’re peeling back even more layers, revealing more about the experiences that have shaped her present-day life,” showrunner Melissa Rosenberg divulged on what to expect in Season 2.

Ritter weighed in to Entertainment Weekly on Jessica's state of mind when the next installment kicks off, revealing,

Jessica is in a pretty dark headspace when we meet her at the top of Season 2. What we’ve done again is kept the story very personal. If Season 1 was in her head and in her mind, then this season will be more in her heart. It’s still a psychological thriller, but it’s more of an emotional thriller this time.

The first season of Jessica Jones was a critical success for Netflix, applauded for its honest representation of sexual assault and it's refreshingly gritty take on the superhero paradigm. Jones isn't just your typical caped crusader, and not just because she rocks a leather jacket instead of a mask — she's a survivor of abuse and dealing with PTSD. She may able to lift a car, but she's also just trying to come to grips the emotional demons that haunt her every day.

"It's groundbreaking in so many ways because of the female point of view, all of the women that we're employing in front of the camera and behind the camera. The biggest compliment that I can get is when women are watching the show and they love it and they are coming at it not as fans of Marvel Comics," Ritter previously remarked to Vulture of the show's impact.

Getting pumped for Season 2? Mark your calendars because the next chapter of Jessica Jones begins streaming March 8 on Netflix.