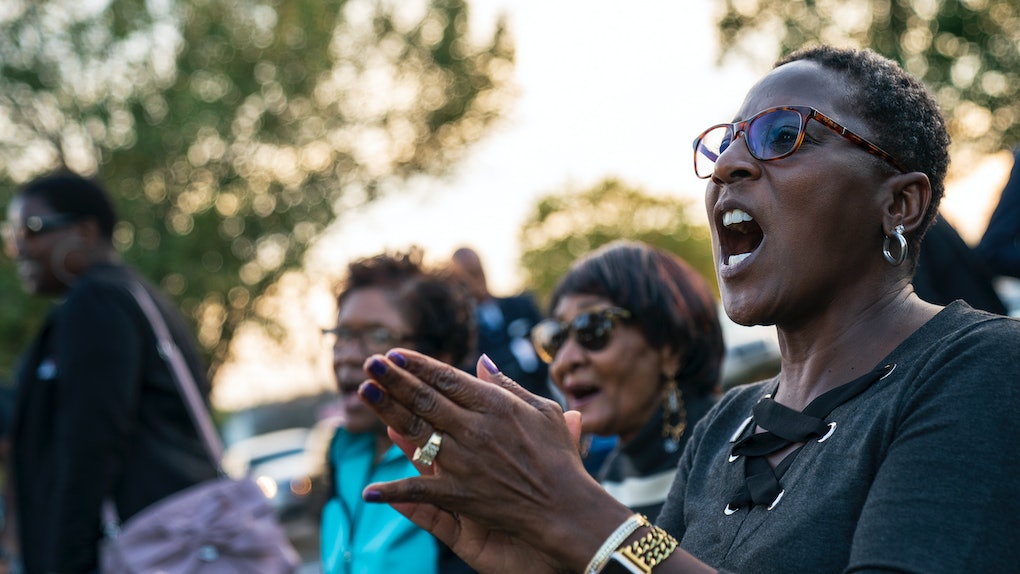 Can you deny the voting power that black women have? When it comes to U.S. elections, black women have been showing up and showing out at the polls, strongly influencing major political races — from statewide elections like the 2018 gubernatorial election in Georgia to national ones like the 2016 presidential election. While some might theorize that the effort is just in response to the current political landscape, the truth is that for some, voting is and has always been an essential part of being a black woman. That's why the I Am A Voter campaign, which aims to make voter participation an active part of black women's identity, is so fitting.

Launched in 2018, the I Am A Voter Campaign is an effort to educate, motivate, and mobilize black women to get to the polls. The campaign, organized by In Our Own Voice: National Black Women’s Reproductive Justice Agenda, works to make voting a part of everyday identity for black women because the job goes far beyond the polling booth. On the day-to-day, employees work to inform people in Atlanta, Memphis, Pittsburgh, Pennsylvania, and Dallas of ballot measures, voting dates, and voting deadlines through informational guides and digital ads.

Marcela Howell, the CEO of In Our Own Voice, explains in an interview with Elite Daily that assuming "voter" as a part of who you are instead of "voting" being just something you do can help people feel more committed to creating change and more capable of navigating the complexities of the political landscape. "I Am A Voter is about civic engagement," she says. "There all these different pieces and layers of government that impact our daily lives. That means you have to be engaged in your community.” In practice, that means protecting and advancing civil and human rights across topics like abortion rights and access, health care, and more by educating and advocating with communities and policymakers who support those causes, according to the organization's website.

Howell says that a big focus of the campaign is to amplify the voice of black women in politics and push back against the ways that she says white women have often spoken over black women and what black women need. “We had been speaking up for years and we can speak up for ourselves," she explains.

This is the constituency you can't ignore.

Recent events have highlighted just how influential black women as a voting block can really be. In the 2017 Alabama Senate runoff race, black women were particularly credited with defeating Republican Roy Moore when 98 percent of black women voters chose Democrat Doug Jones. This helped solidify a monumental victory for Democrats in the deep-red state for the first time in 25 years. There was also the 2016 presidential election, where a stunning 94 percent of black women voted for Hillary Clinton, who has openly expressed the importance and power of the black women vote. The overwhelming voter turnout prompted Democratic National Committee Chairman Tom Perez to tweet in 2017, “Black women are the backbone of the Democratic Party.”

But black women haven't always gotten the credit they deserve — particularly, when white women as a block may counter them. For example, white women overwhelmingly voted for Donald Trump in the 2016 presidential election in contrast to black women's choice of Clinton. "I just think those [voter participation] numbers have been overshadowed by the white women who vote against [candidates who support] us," Howell says.

The political influence of black women is part of an ongoing tradition of civil participation within the black community — one that hasn't always been recognized. "Historically, our community has been at the polls," Howell says. Figures such as Sojourner Truth and Ida B. Wells-Barnett had been fighting for the right to vote as far back as the mid-1800s, despite discrimination from white suffragists who didn't always support the involvement of black women in their movement. By the middle of the 20th century, black women were on the brink of a breakthrough, pushing to enhance their power through rallying, marching and electioneering. Fast forward to the present, and they're even running for office in record-breaking numbers. More than 20 members of the 116th Congress are black women, the highest number in history.

Carol Anderson, the Charles Howard Candler Professor of African American Studies at Emory University, highlights the importance of black women's political power in an interview with Elite Daily. Black women, Anderson says, are both "foot soldiers and leaders" who articulate and advocate for their concerns, but it's bigger than just that. "Issues like health care, having a safe environment, and criminal justice reform are issues that are knee-deep and profoundly felt and fought for by black women. But once implemented, they benefit everyone," she adds.

We're talking about liberation, reproductive oppression, and all these different facets of inequity and oppression that directly affect black women, queer and transgender people, and people of color.

On the ground, the real-life impact of specific issues can be a driving force behind a voting campaign. When black women think of economic issues, they might think about the drastic pay disparities between their white counterparts, as black women make 38 percent less than white men and 21 percent less than white women, per a 2018 report from Fortune. When they think about education policy, the fact that black women reportedly graduate with the most student debt — which is, on average, $30,400 by graduation, compared with $22,000 and $19,500 held against white women and men, respectively, per Newsweek — may come to mind. The topic of health care might only be a reminder of the fact that, according to NPR, black women die of certain issues, such as childbirth complications, at greater rates than white women. It goes on and on.

Your civic duty doesn’t end when you get the 'I Voted' sticker at the voting booth.

Identity is already tied up with how people may benefit from, or not benefit from, political issues, so it makes sense that politics would creep into identity the same way identity creeps into politics. As a medical professional as well as activist, Dr. Krystal Redman, the executive director of SPARK Reproductive Justice Now and organizer of the I Am A Voter Campaign, can speak to the connection between identity factors in health care access and voting. "There [are] really no policies to help uplift black communities [and] get equal access to care," she tells me. She notes a lack of health care coverage and racial bias by medical providers.

Redman has been working to draw attention to issues that affect both cisgender and transgender women of color, particularly in regards to health care access. When black women do make it to the doctor, she says, "There are preconceived notions about black people when they walk in the door. You're most often told about what birth control [or other medications] you should use." It's a problem that has motivated Redman to get politically involved and encourage people to vote for politicians who will support issues important to their community, from launching health education initiatives to expanding access to health care.

"We're talking about liberation, reproductive oppression, and all these different facets of inequity and oppression that directly affect black women, queer and transgender people, and people of color," Redman says.

As black women continue to increase their political involvement, Howell has one important reminder. "Your civic duty doesn’t end when you get the 'I Voted' sticker at the voting booth," she explains. “You need to also take the time to monitor how the politicians [you voted for] are in office, how they’re voting on the issues that made you vote for them in the first place," she advises.

And if they’re not? "Write a letter, send an email, make a phone call, or set up a meeting to meet with them," Howell says. "It’s all about making sure your voice is heard on issues you care about [and] that your neighbors are showing up to support you.”