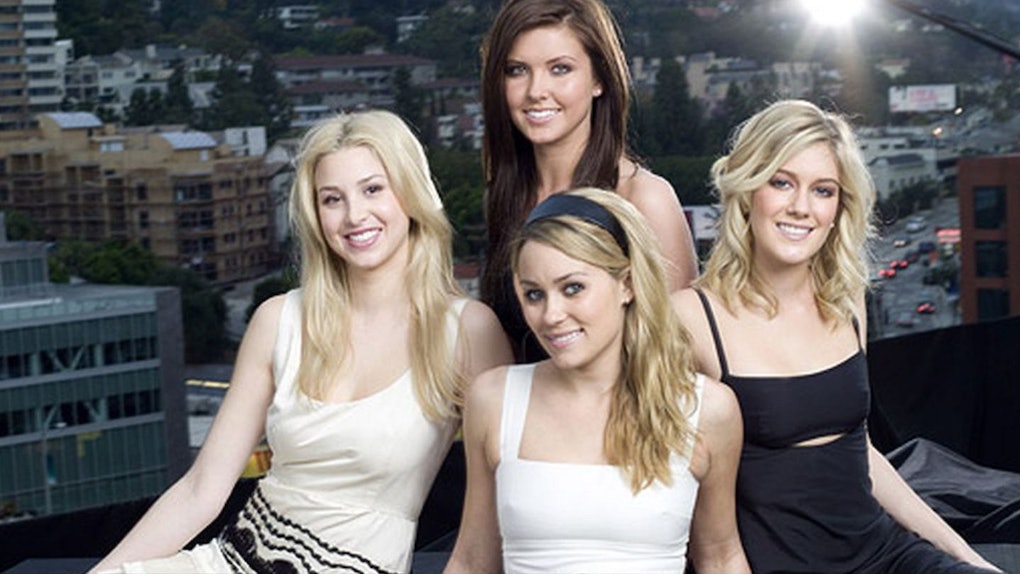 'The Hills' Cast Then Vs. Now Will Make You So, So Nostalgic

The Hills premiered over 12 years ago, quickly becoming a must-watch reality phenomenon for a network previously best known for playing music videos. Following her standout success on Laguna Beach, Lauren Conrad — then known as LC — packed up her slouchy leather tote and headed north (about 50 miles, if you're wondering) to the glamorous wilds of La La Land after a stint in San Fran. What a time to be alive! And looking back, The Hills then vs. now is a sentimental sight to behold. The former frequenters of Les Deux are all grown up.

The show's authenticity may have been questionable, but loyal viewers are still crossing their fingers for a reboot. Kristin Cavallari of Laguna fame (who took over for Lauren Conrad on later seasons of The Hills) is about to headline her own new reality show for E!, so the timing is right in this nostalgia-centric television landscape. MTV is reportedly considering bringing the gang back together again for a reunion, so hopefully fans will get a chance to catch up with the most of the main members on screen at some point in the future. For now, there are old episodes, updates, and social media scraps to keep people in The Hills loop. Let's take a gander at what some of the cast looked like when their hit show was airing and what they look like now. What have these crazy kids been up to these days?

Lauren, aka the girl who didn't go to Paris, has become quite the mogul since her days in the Teen Vogue back office. The FIDM alum unveiled her line LC Lauren Conrad for Kohl's back in 2009 and launced an additional line, Paper Crown, in 2011. She can also call herself a best-selling author — Lauren has released five books and counting. LC's sure come a long way since she made a headband and side-swept bangs a signature look of 2006...

Audrina stepped on the Hills scene as the Quixote Studios receptionist who ended up dating the unforgettable Justin Bobby. She went on to compete on Dancing With the Stars in 2010 and was featured in films such as Sorority Row and Honey 2. The TV personality nabbed a Hills spinoff, Audrina, but the series did not get picked up beyond its pilot. Audrina and former husband Corey Bohan welcomed a daughter, Kirra Max, in 2016. Things have come full circle for the 32 year-old in 2018 — she's reportedly now dating ex Ryan Cabrera eight years after their split.

Whiney became a fan-favorite by playing fashion closet confidante to Lauren. She wasn't as embroiled in the drama and kept her dating life relatively quiet, but that still landed her a spinoff in the form of 2008's The City. Port has a mini style empire of her own courtesy of her Whitney Eve collection. She even released a book, True Whit: Designing a Life of Style, Beauty, and Fun, in 2011. Whitney married The City producer Tim Rosenmen in 2015. They have a one son, Sonny Sanford, who was born in July 2017.

Heidi become Lauren's roomate-turned-frenemy (well, maybe just enemy) after linking up with now-hubby Spencer Pratt on The Hills. She and Spencer have been going strong since their wedding in 2009. Speidi has done the reality TV thing ever since rising to fame on the show, appearing in series like I'm a Celebrity... Get Me Outta Here! and Celebrity Big Brother 19. They welcomed son Gunner Stone in October of 2017.

Montag's boyfriend-turned-longtime-love Spencer became the The Hills' resident villain and these days... he's come to terms with that title.

"At the end of the day, I chose the path that made it so maybe people's opinion of me is bad. And that's fine. They're strangers," Pratt revealed to Insider last year. "That sucks, obviously. It'd be so fun to have everyone love me. But my life goes on and I have lots of fun either way."

Now Spencer is a crystal-selling maven (you can buy his line of stones online) and recently launced the MTV digital series, Spencer Pratt Will Heal You.

Spencer's sis Stephanie, who was set up as a college classmate of Lauren's, eventually became a fixture on The Hills. Pratt has since made a handful TV appearances across the pond following the show's wrap — she was featured on Made in Chelsea and Celebrity Big Brother. In 2017, she released a collection for the clothing brand Goddiva.

Brody, who was introduced as Conrad's love interest, ended up getting his own competition series with 2009's Bromance. The 34-year-old has ties to another famous reality TV family as he's Caitlyn Jenner's son, so he made subsequent appearances on Keeping Up With the Kardashians. Brody married girlfriend of four years Kaitlynn Carter in June of 2018.