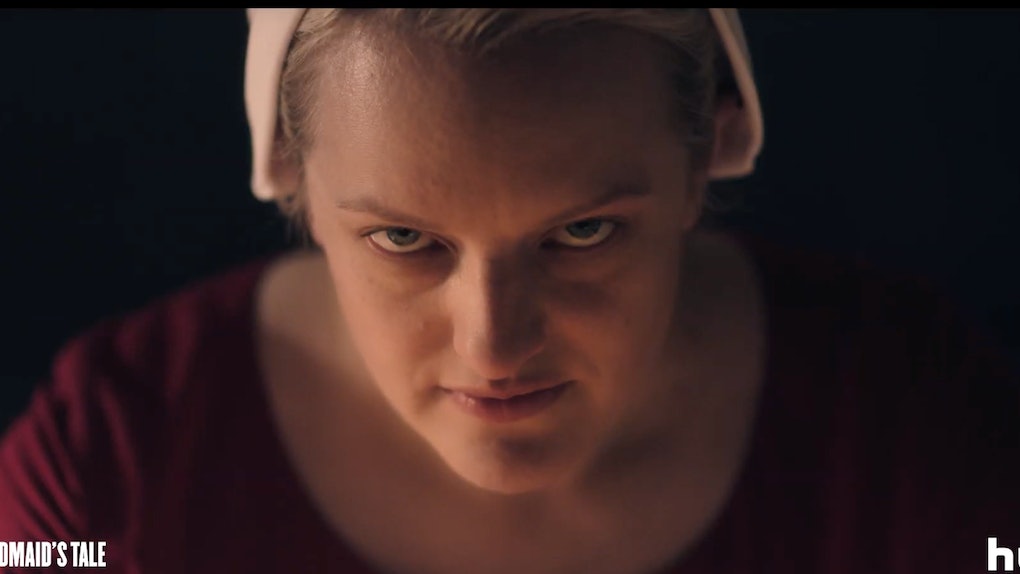 The Handmaid's Tale Season 3 trailer is inspired by a 1984 political commercial called "Prouder, Stronger, Better," which supported Ronald Reagan's reelection bid for president. The first portion of the 44-second-long trailer is set to the same exact narration as the pro-Reagan ad. The narrator says, "It's morning again in America. Today, more women will go to work than ever before in our country's history. This year, dozens of children will be born to happy and healthy families."

To the untrained eye, the trailer might look like a regular commercial or political ad — until about 15 seconds in, when the music changes and the voice that says "it's morning again," becomes horribly distorted, paying homage to the show's dystopian setup. Suddenly the "nice" images from the first portion of the ad become clearly eerie: June/Offred looks disturbingly evil, Serena Joy gazes upon a burning scene, and Commander Fred looks frantic.

If you missed it, check out the rest of the trailer, which is even more disturbing.

Fans of the show took to Twitter immediately after the trailer aired to express how completely and fully shook and excited they were after seeing the trailer.

Even people who don't watch The Handmaid's Tale were impacted by the powerful trailer.

In a press release shared with Elite Daily, Hulu confirmed that the trailer takes inspiration from the famous "Morning in America" commercial. The press release also gave some more insight into Season 3, saying,

The Handmaid’s Tale spot takes inspiration from Ronald Reagan’s iconic “Morning in America” campaign commercial to creatively set-up the storyline for the upcoming season, which features themes of optimism, hope and renewal as characters attempt to take a stand against Gilead.

For those who don't already watch the based-on-a-book show, Hulu describes it as a "story of life in the dystopia of Gilead," facing "environmental disasters and a plunging birthrate." Also, "Gilead is ruled by a twisted fundamentalism in its militarized ‘return to traditional values.'" Though there are certainly scary, uncomfortable, and haunting moments revealing the dire consequences of fundamentalism throughout the first few seasons, the show is ultimately about resilience, community, and sisterhood in times of strife. So yeah, heavy stuff.

Though the trailer didn't reveal the actual release date, fingers crossed Hulu releases it sooner rather than later. America is waiting to learn about June/Offred's fate after that unbelievable Season 2 finale.