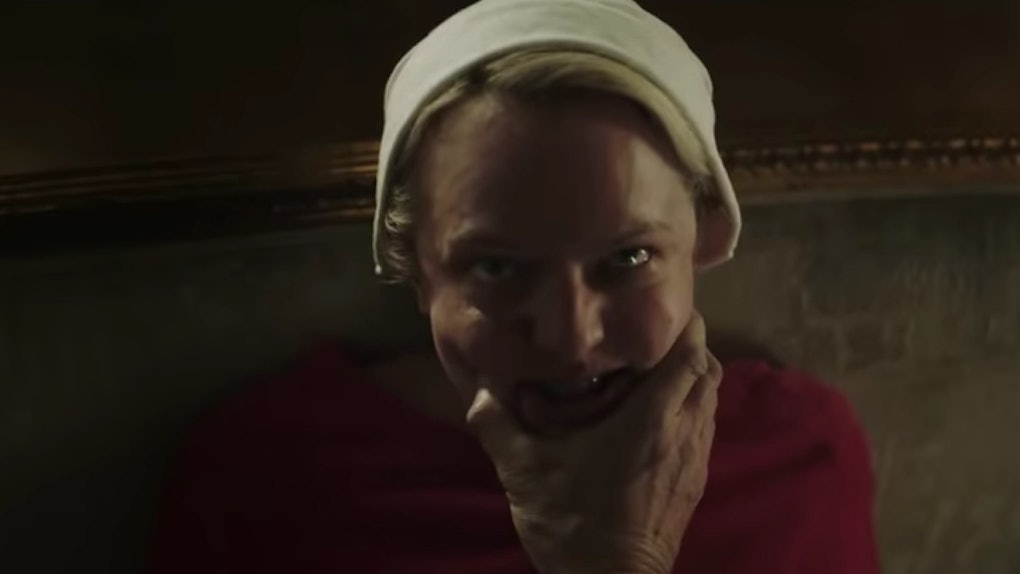 Happy 4th of July to June and nobody else. The Handmaid's Tale Season 2 finale promo is here and I have no idea who is most screwed. Probably June, because that's been the plot line and whatever, but really everyone seems all worked up in this intense teaser. Episode 12 left off with a traumatic drowning execution, which Serena felt was appropriate to bring a baby to, and left fans feeling light-headed, weak in the knees, and heavy in the heart. In the finale promo, it looks like everyone is left aggressively fighting for whatever they believe in or desire and it's unclear exactly who is on which side of the Gilead initiative.

The promo opens up with Waterford menacingly whispering to June she is "the misery of all men." I don't know what he's getting at but I know I hate it. He probably means something like, "This is so annoying because my whole 'thing' is that you are supposed to be a platonic tool used to make children but biologically I have complicated feelings, emotions, and desires towards you which makes it hard for me to keep up my too-cool-for-school persona and causes drama with my wife."

The rest of the promo involves dark footage, ominous music, and more than a few intense close-ups of the handmaids in turmoil. Now would be a good time to excuse yourself from your work desk and take some time to yourself to soak it all in.

I find it's best to watch these things with the closed captioning on so you can really get the full picture.

Let's break it down, shall we?

First of all, Aunt Lydia, stop telling handmaids they're lucky to be in the position they're in. No they're not. It's still unclear if Emily is safe in the hands of her new commander or if he's just a special brand of torture. In the video, fans hear him very creepily ponder, "What should we do with you?" and I'm over here like, "Set her free! Let her take her hat off! Help her locate her friends and family!"

Serena and Fred seem to really be going through something too, considering it looks like Fred takes off his wedding ring. Oops. In the trailer, Serena is admitting something to Fred in front of very dramatic stain glass windows and claims whatever she does in the finale it's "to set an example" for their daughter. Clearly, her actions must backfire considering the next cut shows her being dragged away screaming while she looks at something past Fred. My guess is whatever is going on off camera involves her (I mean June's) baby, but then again, doesn't everything that happens in The Handmaid's Tale have to do with babies?

Nick is left out of the trailer but it looks like that's because June is busy straight up slapping Fred Waterford instead of running away with Nick like he hoped. In one extremely intense moment, June's face is being grabbed by someone (Fred, probs) and moments later she's pictured winding up for a blow to his head. The trailer ends with the words "the end is only the beginning" and Fred murmuring, "All will be well from here on."

I recommend you stock up on your feel-good snacks and anti-anxiety tools now in preparation. The finale airs on Wednesday, July 11 on Hulu and then again in my mind over and over and over.