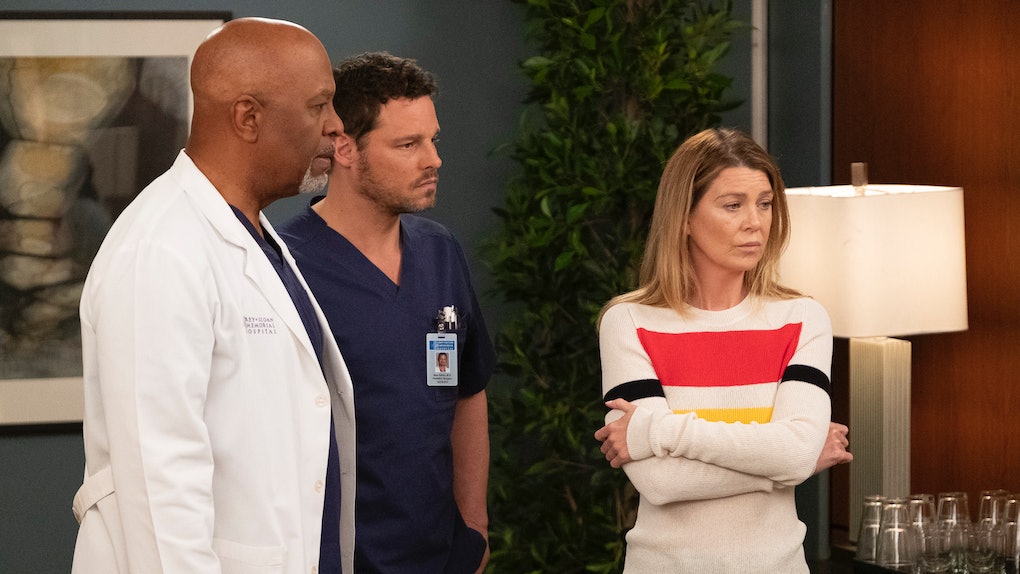 Meredith Grey may deliver wise monologues to the Grey's Anatomy audience at the end of each episode, but it turns out she's not infallible. After she treated a patient without insurance through her daughter's health care, Webber advised Meredith to keep her hospitalized until a state policy kicked in. Officials caught the fraud, but DeLuca stepped up and acted as if filing the patient under Ellis' name was his idea. Toss in the upcoming episode's other conflicts and the Grey's Anatomy Season 15 finale promo will make your heart proud. Let's break this down.

In addition to DeLuca (Giacomo Gianniotti) taking the fall for Meredith (Ellen Pompeo), May 9's "Drawn to the Blood" detailed Meredith giving Jo (Camilla Luddington) a pep talk in favor of actively living again. Her delivery worked and, as they phrased it, Jo didn't want to "stop." Meredith took her to the hospital with the intention of talking to Alex (Justin Chambers) and Bailey (Chandra Wilson) and getting Jo a leave of absence to fully recover from her tailspin. Meanwhile, Teddy (Kim Raver) realized she had always loved Owen (Kevin McKidd), but the confession came right before her water broke at his house, where Amelia (Caterina Scorsone) was taking care of Leo.

In true Grey's Anatomy fashion, an uncontrollable factor will now settle in for May 16's season finale. As a heavy fog descends upon Seattle, Owen, Schmitt (Jake Borelli), and their golden blood donor are en route to the hospital when they're caught in a car crash on the freeway. The fog is preventing an ambulance from reaching them, while Amelia and a laboring Teddy are seemingly caught in the same traffic on the way to Grey Sloan. The teaser shows Maggie (Kelly McCreary) and Jackson (Jesse Williams) now dealing with rain on their camping trip before the footage flashes to Amelia running through a lineup of cars.

Most seriously of all, the "Jump into the Fog" promo ends with police ushering DeLuca away, prompting Webber (James Pickens Jr.) to ask, "Why is my star resident in handcuffs?" In surgery, Bailey then questions him about the insurance incident, saying, "I don't think he did it alone. You wouldn't know anything about that, would you?"

With DeLuca seemingly arrested, will Meredith and Webber come forward with the truth? DeLuca lied to protect Meredith and her kids, but as she was locked in the hyperbaric chamber at the time of his confession, she couldn't exactly stop him from covering for her. As she was previously doubting the validity of their feelings for each other, did DeLuca partially do this to show how serious he was about her? Plus, should fans have to worry about that Grey's Anatomy pattern of odd-numbered seasons typically ending with death?

As fog begins to cover Seattle, the doctors of Grey Sloan navigate through personal complications. Meredith and Alex attempt to save Gus, while Levi talks some sense into a struggling Nico.

Welp, that summary isn't much help. Fingers crossed that this finale doesn't have too much tragedy, because I don't think my tissue supply could take it.