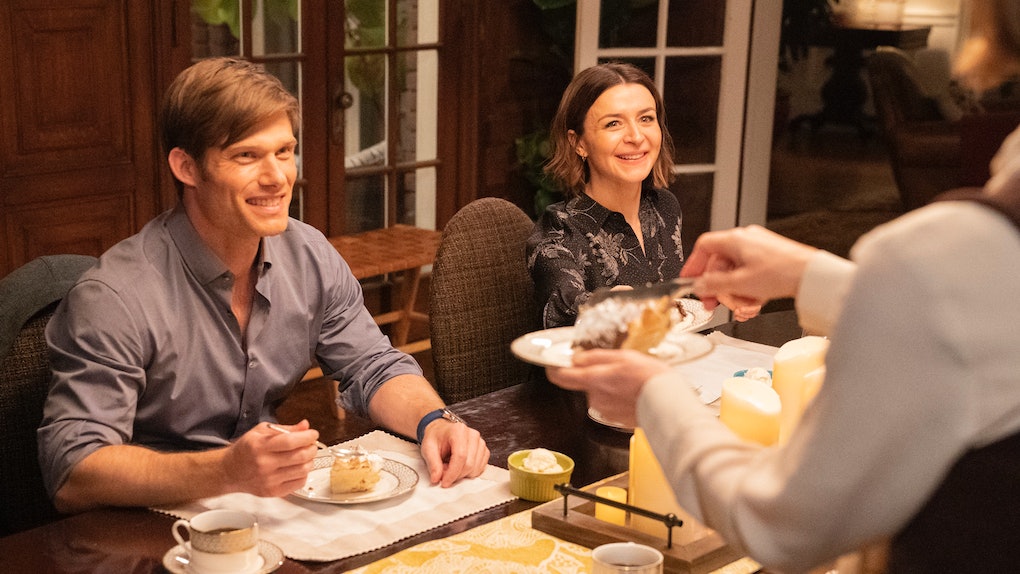 Amelia has had a rough year on Season 15 of Grey's Anatomy, balancing a rocky relationship and a teenager with a drug problem before ultimately saying goodbye to both scenarios. Since breaking up with Owen and giving him full custody of baby Leo, Amelia has fooled around with Link, but given her circumstances, it's no surprise that she's reluctant to commit to anything with him. But that may change soon, as the Grey's Anatomy Season 15 Episode 21 promo promises a Shepherd family reunion that puts Amelia and Link in an awkward position.

The April 11 episode "Good Shepherd" marks the Amelia-centric story that was first announced in January. Back then, actress Caterina Scorsone teased that the episode didn't even take place in the hospital, and now that the preview is out, we know that she wasn't kidding. In a break from everyone else's drama, Amelia and fling Link (Chris Carmack) are in New York to operate on a patient with a spinal deformity. Amelia also sees the trip as a chance to be with Link without real-life circumstances haunting her.

Their carefree getaway takes a turn when they run into Amelia's sister Nancy (Embeth Davidtz), who has presumably continued to live on the East Coast as an OBGYN since her last appearance early in the show's run. Facing her sister, Amelia panics and introduces Link as her husband. The news prompts a dinner with her sisters, including the previously unseen Kathleen. While Amelia and Link have to maintain the facade of being married, Kathleen (Amy Acker) jokes about how Amelia ended up with the hottest husband.

While fourth Shepherd sister Lizzie (Neve Campbell) appears to be absent from the reunion, ABC's photos from the episode suggest that conflict quickly arises among the other women. In the pics, Amelia stands away from the dinner table as Link seemingly confronts Nancy. Anyone with a sister can attest to how complicated the relationship can be, and as Amelia has apparently kept quiet about what she's experienced lately, family tension is bound to surface.

Given Kathleen's own background, the stress Amelia has been under could easily become the main topic at the family dinner. Kathleen is a psychiatrist, meaning that she's probably used to deciphering her sisters' moods and getting down to the bottom of their issues. Let's just say that there's likely a reason why none of the sisters live close to each other or keep in touch via a text thread.

Fans are blessed with this insight into the Shepherd family dynamic because ABC bumped Grey's Anatomy's episode count from 22 to 25 this season. The room for more stories inspired showrunner Krista Vernoff to share this side of Amelia that wouldn't have been told otherwise. Amelia has definitely adopted Meredith (Ellen Pompeo) and Maggie (Kelly McCreary) as honorary sisters since settling in Seattle, but this visit with the Shepherds looks destined to put her life and relationship with Link into question.