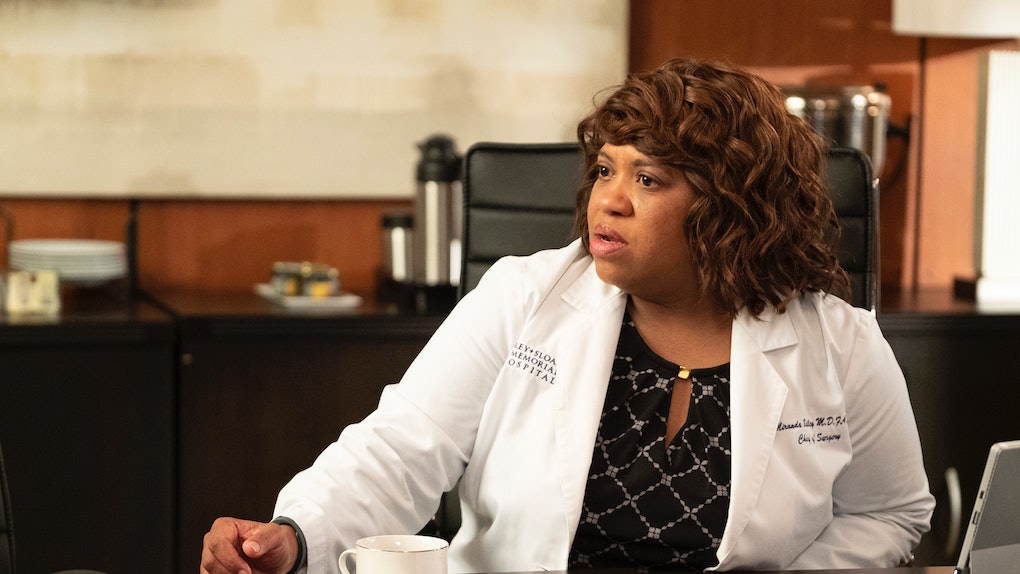 The world of Grey's Anatomy collided with that of its spinoff series Station 19 during its May 2 episode, detailing the hospitalization of Fire Chief Ripley. While the firefighters gossiped about their boss's unveiled romance, Meredith danced around a patient's lack of insurance and treated her anyways. She was soon distracted by DeLuca's first "I love you," but the Grey's Anatomy Season 15 Episode 21 promo teases that "something big" with Bailey takes over everyone's attention. With only two episodes left in the season, what's next for Grey Sloan Memorial?

May 2's "What I Did for Love" wrapped up Meredith's (Ellen Pompeo) insurance faux pas when Webber (James Pickens Jr.) seemingly forgave her for disobeying rules. He then suggested she find ways to keep her patient hospitalized until a state policy kicks in 30 days later. But the promo for May 9's episode hints that the two's agreement may have caused trouble for the hospital.

The clips show Catherine (Debbie Allen) walking to a meeting and ignoring Webber asking if everything is OK. The other doctors join him in peeking at a meeting including Catherine, Bailey (Chandra Wilson), and what look like hospital officials. The meeting goes long enough for Meredith and Jo (Camilla Luddington) to show up in their street clothes and ask for Bailey, but DeLuca (Giacomo Gianniotti) suspects that taking her away from the meeting isn't a great idea. As the teaser says, "Something big is goin' down," the footage ends with a classic Bailey staredown.

ABC's episode blurb seems to confirm that Meredith and Webber bending the rules has come to Bailey's attention, reading:

Alex tries desperately to save his patient Gus while he waits for a severely agoraphobic blood donor to arrive from London. Jo reveals to Meredith why she’s been so down, while Catherine and Bailey hold a meeting to get down to the bottom of an insurance issue. Meanwhile, Maggie and Jackson go camping.

As evident by Jo's pale face in the promo, the episode will also explore her inner trauma, which kicked off when she visited her birth mother earlier in the season and learned she was the product of rape. As Jackson asked Maggie to move in with during the last episode, this sudden camping trip could also mean that a different kind of question is on its way. Are there wedding bells for the two in the future?

Plus, is this insurance issue definitely related to Meredith and Webber's dilemma? It seems likely, so this may set up conflict for the season finale and an all-but-confirmed Season 16. The summary for May 16's episode only teases "personal complications," so anything could happen as Grey's Anatomy wraps up Season 15.

As for that Season 16 renewal, ABC has yet to officially announce it, but it's safe to say that fans would know long beforehand if the drama was ending soon. The final decision will likely be announced in the next few weeks, but in February 2019, President of ABC Entertainment Karey Burke announced she was "planning for more" of the show. Hold tight if Season 15 ends with a massive cliffhanger, because we'll likely receive answers in a Season 16 premiere this fall.