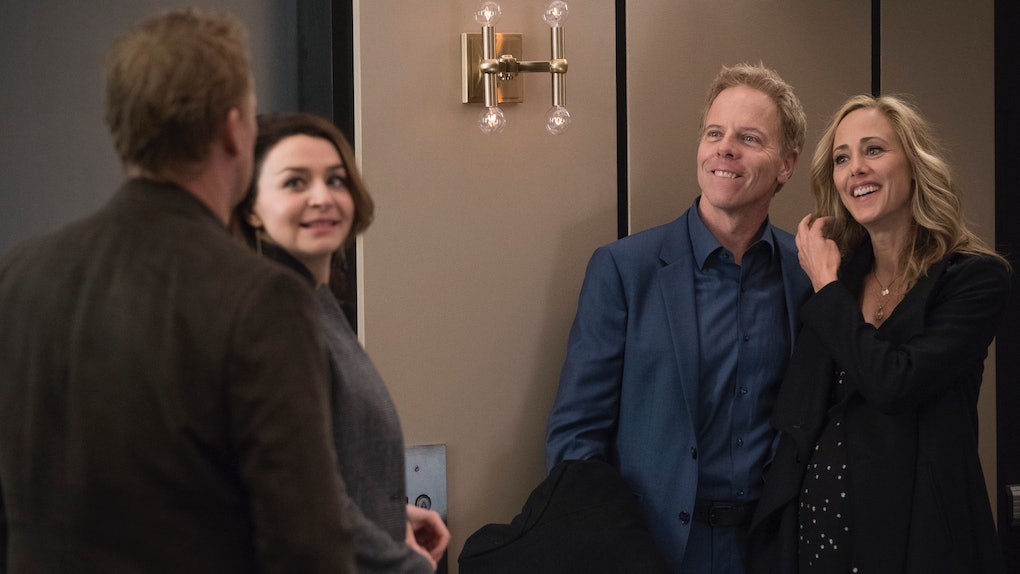 Meghan Markle might seem like she's having the longest pregnancy ever, but I'd wager that Teddy's pregnancy on Grey's Anatomy has hers beat. Despite announcing Teddy was with child in last May's season finale, the show has played around oddly with time, essentially making Teddy the perennially pregnant woman. But with the days until her baby's arrival finally winding down, Teddy has faced tension with her baby daddy Owen amidst starting a new romance with hospital sleaze Koracick. Keep calm, but Teddy might have another issue coming her way. The Grey's Anatomy Season 15 Episode 18 promo teases that something's wrong with her baby, so Teddy just can't catch a break.

In March 14's episode, "And Dream of Sheep," Teddy (Kim Raver) was preoccupied with another woman's pregnancy-related emergency, and she refused to take a rest from watching over the patient. Despite his best efforts to convince her to go home, Owen (Kevin McKidd) kept vigil with Teddy, even rubbing her feet. Meanwhile, his ex Amelia (Caterina Scorsone) was cozying up to Link (Chris Carmack) at a conference, seemingly clearing Owen's conscience about possibly pursuing Teddy again.

The promo for March 21's "Add It Up" teases an update on Amelia and Link's status, as well as a growing distance between DeLuca (Giacomo Gianniotti) and Meredith (Ellen Pompeo). Most importantly, the clips show Teddy in a hospital gown and stretched out on a gurney. Owen lies on a cot next to her, calling her family, but the intimate mood takes a sharp turn when Koracick (Greg Germann) arrives.

"If you plan to make a play here, rethink that," he tells Owen. "I'll fight for her."

While Teddy's state hints that this long-awaited baby is finally on its way, think again. According to the network's description, she faces a pregnancy complication rather than an impending birth. But then again, Grey's Anatomy loves its cliffhangers, so perhaps the hour will end with Teddy having to go into an urgent C-section.

Maggie introduces mood rooms as an alternative approach to medicine. Alex and DeLuca butt heads over an 11-year-old patient who tries to sabotage her own surgery. Jackson and Richard deal with a gender non-binary patient. Meanwhile, Teddy has a pregnancy scare that brings Owen and Koracick to odds.

Based on real time, this baby is long overdue, but at least we can (hopefully) count on its birth before the end of this season. Owen and Teddy's complex love square with Amelia and Koracick is still a big factor in how the child's first few months of life will go, but it looks like Owen will stay loyal to Teddy and their baby no matter what.

The start of Season 15 saw Raver spilling to Entertainment Tonight about how Teddy's pregnancy would go. At the time, she placed emphasis on Teddy handling motherhood alone, saying:

Does Teddy want to be alone? No. Has she deeply loved Owen for a really long time because she’s had great loss in her life? Yes. Will she be fine in the end? Yes. But what makes it so interesting is that we are searching for a relationship, but a modern concept is: We’re also fine on our own and I think we’re actually better partners when we do become stronger alone.

Here's to slowly but surely reaching the end of this pregnancy storyline. Season 15 of Grey's Anatomy continues on Thursday, March 21, at 8 p.m. ET on ABC.