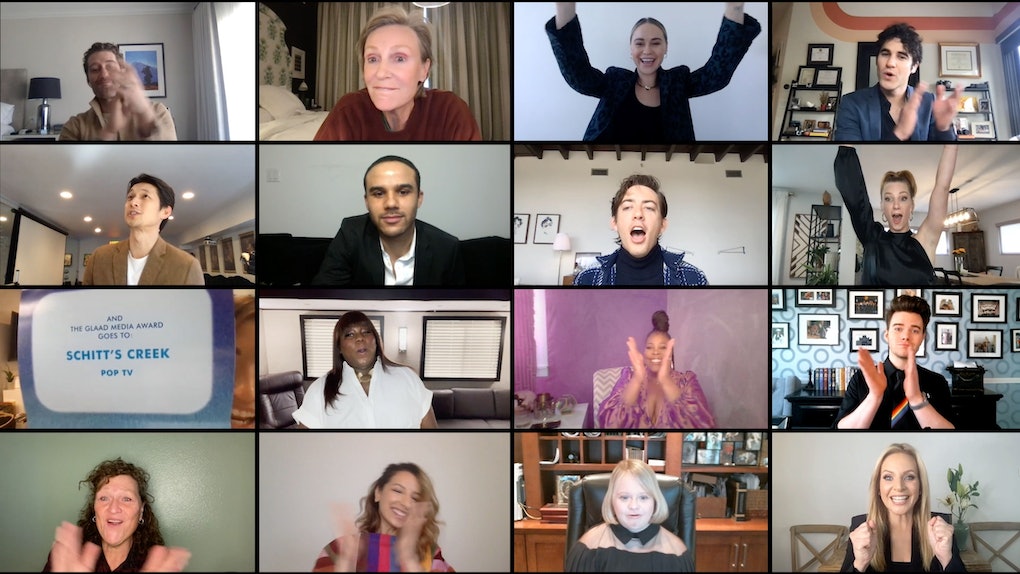 It's been almost a year since Naya Rivera tragically died at the age of 33. But her legacy, particularly as the actor who played out-and-proud Santana Lopez on Glee, still has a hugely important impact on people. That's part of what made the Glee casts's tribute to Naya Rivera at the 2021 GLAAD Media Awards so moving.

Over the course of six seasons, fans watched as cheereleader-turned-Glee Club member Santana came out as a lesbian and later married her longtime girlfriend, Brittany S. Pierce (Heather Morris). She remained outspoken and learned to come into her own as both a performer and proud member of the LGBTQ+ community, making the character resonate with thousands of viewers (especially LGBTQ+ and Latinx fans). The GLAAD Media Awards tribute, which took place on April 8, is a powerful reminder that Rivera and her impact will never be forgotten.

Singer-songwriter Demi Lovato, who played Santana's girlfriend Dani in Season 5, introduced the tribute with an emotional speech of her own. "Santana Lopez was groundbreaking for closeted queer girls, like I was at the time," Lovato said. "Her ambition and accomplishments inspired Latina women all over the world. That's the power of a show like Glee."

"There was always just so much more than met the eye with Naya," Criss said.

"She made everybody laugh on screen and off but the real win is if you made her laugh because you knew you actually did something really funny," Ushkowitz added, while Morrison spoke about how great of a mother she was and Lynch reminisced on how much Rivera impressed her when she became a regular cast member.

The cast also looked back on the heartbreaking Glee scene in which Santana's grandmother kicked her out for being a lesbian, noting how important her character was for LGBTQ+ and Latinx representation. As Riley pointed out, Rivera even hosted the GLAAD Media Awards twice — once solo, and once with her late Glee costar Cory Monteith.

Rivera received one more special guest at the GLAAD tribute: Her mother, Yolanda Previtire. Although she wasn't able to join the tribute, she did share a message. "Naya would be honored to receive this recognition," she said. "When Naya was told that Santana would be a lesbian, she called me to let me know and I asked her how did she feel about that and she said 'I feel great about it!'"

Previtire continued: "Her desire was always to be an advocate to those who did not have a voice. I don't believe that she realized how important she was to this world. I am grateful that my eldest daughter helped to change the landscape of how we view and see each other. Thank you GLAAD for keeping my daughter's legacy alive."