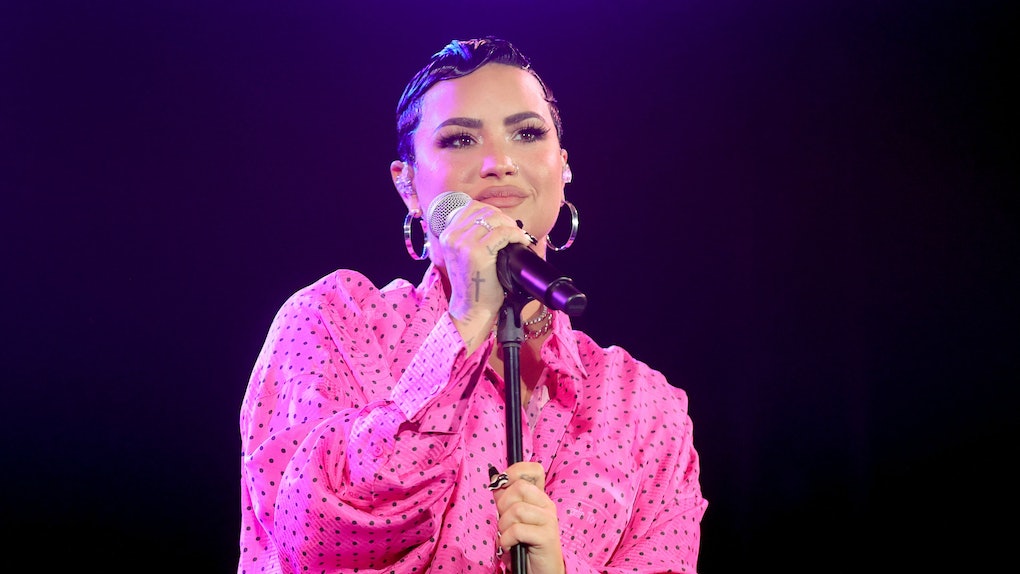 Labels aren't the end-all, be-all of LGBTQ+ identity, but they can make many queer people feel empowered. In a March 27 interview, Demi Lovato revealed she's pansexual, and it sounds like the pop queen is really happy with who she is right now. On an episode of podcast The Joe Rogan Experience, Lovato acknowledged that a long-term cis male partner might not be in the cards for her, so she's thinking about raising children on her own. “I don’t know. I’m so fluid now," Lovato said.

When Rogan asked if "sexually fluid" encompassed attraction to men and women by saying, “What do they call that? ‘Pansexual'?" Lovato replied, "Yeah, pansexual. [I like] anything, really." She later went on to joke about being a part of "the alphabet mafia," which has often been a disparaging, anti-LGBTQ+ term, although some queer people, Lovato included, have reclaimed it. “I’m part of the alphabet mafia and proud,” Lovato said. "Why can’t we just say queer, y’all? Nah, I’m just kidding.”

She also went on to talk about her queer sexual awakening, citing the 1999 film Cruel Intentions, which features a steamy kiss between Selma Blair and Sarah Michelle Gellar.

This wasn't the first time Lovato touched on her sexual awakening. Back in October 2020, during Facebook Watch's Coming Out 2020 special with Tan France, she said, "It was definitely when I was young and should not have been watching Cruel Intentions, but I did, and it was that scene where they made out on the park lawn. I was just like, 'Oh, wait a minute. I really like that.' I was like, 'I want to try it!'"

As Lovato went on to explain to Rogan, growing up, she internalized the homophobia of her conservative Christian environment. “[I] felt a lot of shame because growing up in Texas as a Christian, that’s very frowned upon,” she said on the podcast. “I shut it down before I even let myself process what I was feeling.”

Coming out isn't an essential part of being queer, but shout-out to Lovato for living her truth, even when it's terrifying.