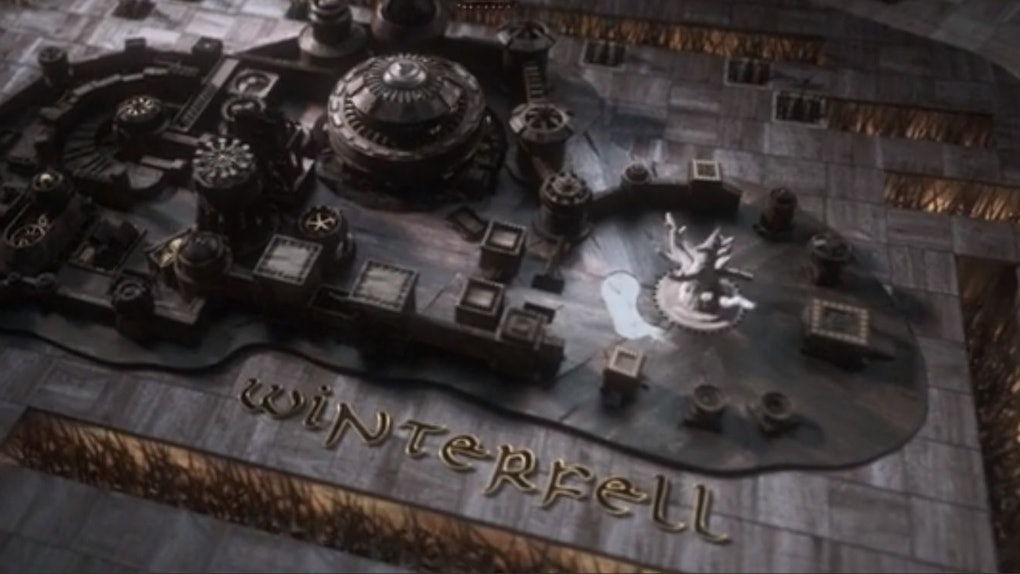 Game of Thrones Season 8 is making news every week for the final six episodes. But one of the biggest splashes the show made upon its return last week concerned the opening credit sequence. The "Clockwork Map," long a beloved favorite of fans, had undergone a complete overhaul. But what no one could have anticipated is that the Game Of Thrones Season 8 opening credits are now going to change every week, and in ways that hint at the larger story.

The opening credit sequence has always undergone changes throughout the season, switching out secondary locations depending on where characters currently reside. Season 8's overhaul was more dramatic, changing out the Astrolabe carvings, as well as ditching Castle Black as the stand-in for "The Wall," using the hole at Eastwatch instead. It also condensed locations down, to just the Wall hole, Winterfell, and King's Landing, with deep dives inside the latter two areas for the first time.

But it turns out that's not the only hint contained inside the opening credits. There was also a crucial detail that many overlooked. Watch again, and note how the snow from the Wall hole to Last Hearth flips over, creating a icy blue path that is slowly enveloping it, before turning West towards Winterfell.

Now watch the credits from the second episode, "A Knight of the Seven Kingdoms." Note the tiles are no longer flipping on the way to Last Hearth. That's because those tiles represent the Night King's Army. They've already passed through this area, leaving an icy blue path behind. The tiles are now flipping in the direction of Winterfell.

Arriving at Winterfell, fans discover it has also changed from last week.

Those lighter-colored rectangular depressions in the ground have opened. There are also tents set up outside the castle.

The opening credits reflect conditions on the ground at the top of the episode. At the beginning of the premiere, "Winterfell," the Night King and his army were approaching Last Hearth, as Ned Umber was being sent home. As "A King of the Seven Kingdoms" opened, Last Hearth had fallen, and the Army was heading for Winterfell, who were preparing their tent cities and trenches.

If this pattern holds, next week's episode should see those tiles flip to blue all the way to Winterfell, and the rest of the war machines and trebuchets at the ready as the camera shots pan through the castle. It might even match Jon's own War Room map:

Most fans have obsessed on this, as it reveals the layout for next week's battle. On the left flank, a mixture of House Stark and Arryn. On the right, House Stark. Center front, the cavalry of Dothraki (triangles), and behind them the Targaryen army and the Unsullied (circles). Inside the castle, House Mormont and a single square representing those in the crypt. But look at the army they're all facing.

The Night King's army is represented by icy tiles.

I don't know about anyone else, but I am terrified to see what the opening for episode 4 will look like.

More like this
This 2021 'Game Of Thrones' Season 8 Trailer Is So Confusing... & So Good
By Ani Bundel
'Ted Lasso' Season 2: Apple TV+ Release Date, Trailer, Cast, & More
By Ani Bundel
Is Commander Joseph Lawrence Good Or Evil? 'The Handmaid's Tale' Fans Have Questions
By Ani Bundel
Stay up to date