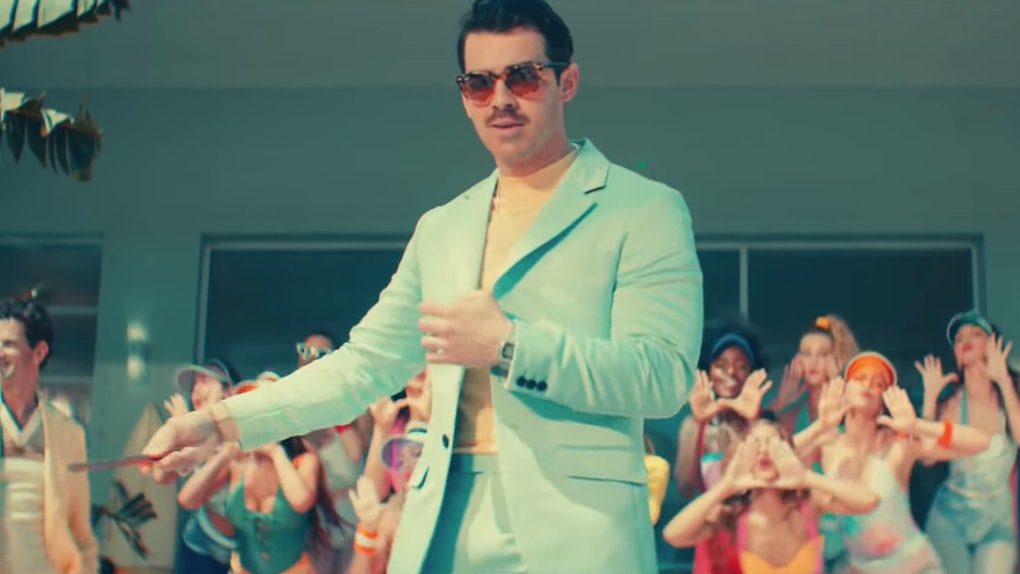 The Jonas Brothers are really, really back, you guys. And with every single they drop, I fall right back into being the super fan I once was back in 2007. The boys dropped their latest single, "Cool," on Friday, April 5. And besides the fun beat and funny AF music video, there was one particular thing that put the song over the edge as my fave so far. The Game Of Thrones line Joe Jonas sings in "Cool" was a tiny shoutout to his fiancée, Sophie Turner, and I am living for it.

In the song, Joe gets the second verse. He sings,

Must've done something right 'cause all these lights are green, man, they look like palm trees. And every time that song comes on it's about me. Oh, I feel like Post Malone when I get home, sittin' there, winning like it's Game of Thrones. And now that we've made it, how complicated was last year?

In case you're not fully aware, let me fill you in. Joe Jonas and Sophie Turner, aka Sansa from the best TV show of all time, Game Of Thrones (don't @ me), started dating in 2016 and announced their engagement in October 2017. The two seem to be inseparable, and Turner even made a little guest appearance in the video for the Jonas Brothers' last single, "Sucker." It's clear that Turner is a huge supporter of her future husband, and it makes my heart swell to know that Jonas is just as big of a supporter of his partner... if not bigger.

The same week the "Cool" single and video dropped, Jonas made his support apparent by tagging along with Turner to the New York City premiere of Game Of Thrones Season 8. And he kind of won the night with the Instagram he posted from the event. In the photo, we can see Turner with her arms around Jack Gleeson, the actor who played King Joffrey on Thrones. Jonas is in the shot, standing awkwardly far away from Turner and Gleeson and looking extremely confused. The caption read, "WTF I thought this dude was dead... #KingJoffrey." Turner posted the same photo with the caption, "Awkward...." As a huge Thrones fan and huge JoBros fan, I truly cannot handle this.

With the upcoming season of Thrones being the last (I can't stop crying), fans have been grasping at straws for any information about how the series ends. Well, according to Turner herself, Jonas knows everything. She told Good Morning America during a visit on April 2 that her fiancé had to sign an NDA because he was on set so much. “I have [told him the ending]. Well, actually, he was on set for most of it, so he kind of figured it out and then he had to sign an NDA,” she said. "He’s terrible [at keeping secrets]... So I don’t know how that one’s going to work out. Yeah, you can give him a call. He’ll probably tell you everything," she continued. BRB, making a few phone calls.

I don't know about you, but this little "Cool" shoutout just solidifies these two as couple goals in my mind. Maybe the Jonas Brothers can do a cover of the Game Of Thrones theme song next?

More like this
Are Olivia Lux & Utica Dating After 'Drag Race'? Olivia Gave An Update
By Dylan Kickham
Dan Levy's Quotes About The 'SNL' Note Tradition Clarify Who Really Started It
By Dylan Kickham
This 2021 'Game Of Thrones' Season 8 Trailer Is So Confusing... & So Good
By Ani Bundel
Stay up to date