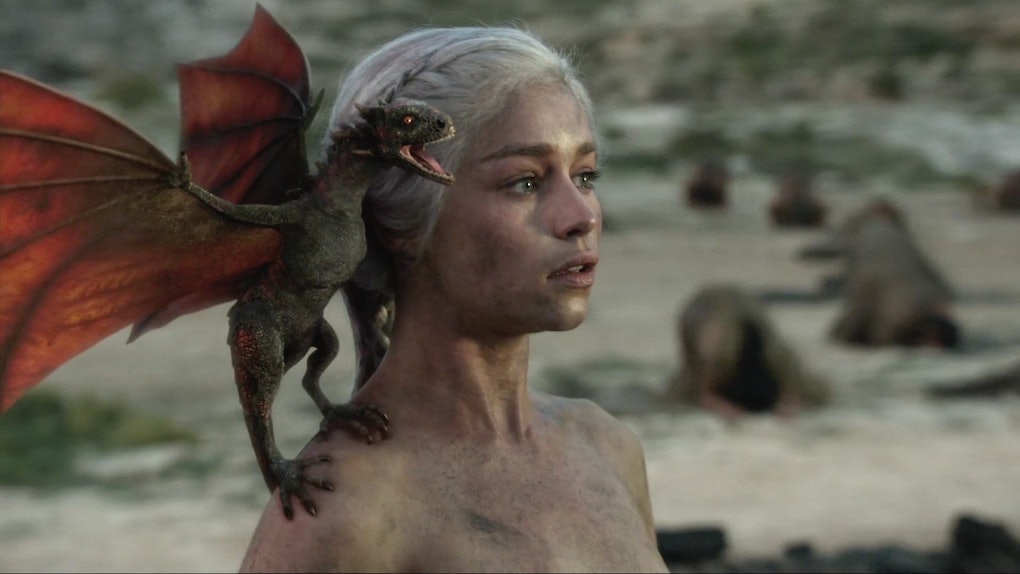 The 'Game Of Thrones' Character You Are, According To Your Zodiac Sign

Not only does Game of Thrones contain an alternate universe that almost feels more richly detailed and complicated than our own, the characters are filled to the brim with dimension. So much so that after seven seasons, they still pleasantly (and heartbreakingly) surprise us. At the end of the day, it's the characters who make the show so addicting and it's the characters who make the show so unique. The Game of Thrones character you are, according to your zodiac sign, will allow you to further transport yourself to Westeros, knowing your personality is fully represented.

In Game of Thrones, we find ourselves rooting for the heroes as much as we do for the foes. And let’s be real, who exactly are the heroes and foes? They’re switching places all the time. Just like the real world, none of us are always the good guy and sometimes, we find ourselves filling the role of the bad guy. This is why, with all their negative and positive attributes, the characters of Game of Thrones can be seamlessly matched with a zodiac sign. And let's be real, this wait for the next season is an unbearably painful one. The least we can do is feel validated in our similarities to the most iridescent cast of characters ever written.

Some of us were born to lead and Daenerys leads with all the passion and conviction of an Aries. Never shying away from a challenge, never letting fear prevent her from saving the day, Daenerys wields her Aries strength with three dragons at her side, which is just the right amount of intensity and power an Aries would have their enemies bow down to.

Never failing to maintain grace and dignity under pressure, Lady Catelyn radiates the tenacity and control of a Taurus. Ceaselessly loyal to her family and always with her position in mind, she strategizes the greatest plan and commits to her promises. While finding it difficult to hide her disdain for her foes, she prevails in keeping her mission in mind.

There's no doubt that Sansa can survive anything she's put through. Setting her feelings aside, she uses her charm and persuasiveness to fool her foes into believing she's on their side. Her Gemini changeability has aided her through several periods of imprisonment, and her intelligence is what has led her to becoming a clever leader in her own right.

Although she may be cutthroat and unforgivably devastating in her decisions, there's nothing in the world Cersei wouldn't do for her children or for the Lannister name — and I mean nothing. Like a Cancer, she would set fire to entire cities and torch her enemies in the most despicable ways if it would guarantee the safety of her closest loved ones.

While Tyrion's size has left him vastly overlooked by his family, anyone who comes across him can't deny his ability to enchant and command an entire room. No matter how dire a situation may be, he still finds the humor and frivolity in things. However, to compliment him only for his charm would be a disservice. Like a Leo, his intelligence is surprisingly as sharp as a knife.

No one has as pure of intentions as Brienne of Tarth. Like a Virgo, loyalty, righteousness, and logic are prized above all in her universe. She is a fiercely intimidating warrior in her own right. While she could use her power for selfish gain, she stands nobly by her commitments as a knight, maintaining a clear head despite criticism of her gender's ability to fight.

Anyone who comes across Margaery can't ignore her Libra-like charm, wit, and beauty. Beneath her pleasant demeanor is an unshakeable desire to become queen. While that's not a unique aim in Westeros, her aim comes from a genuine place. Her talent for diplomacy, fairness, and empathy leads her to knowing she'd be the most principled ruler of all.

Arya Stark never forgives and never forgets, especially when it comes to those who bring harm to her family. Her will is as strong as iron and her sting is as poisonous as a Scorpio's. Doing whatever it takes to become powerful enough to defeat those who threaten her loved ones, she would go through the furthest depths of pain and all the way back.

Despite his clear loyalty to the Lannister name, there survives an irrefutable wild streak in Jaime. Above all, he's an adventurer and a warrior. He cannot be tied to a traditional idea of what a man of such a high house should be, much to the dismay of his father. Even with the orders of his loved ones in mind, he always follows his intuition first.

No matter how underestimated he's been, Jon Snow embodies fierce determination, unbreakable commitment, and a loyalty to what's just. From an inconspicuous member of the Night's Watch all the way to the leader of a revolutionary army, Jon can't help but be the one who spearheads change for the better. With a thick skull and a heart of gold, he represents Capricorns everywhere.

Although her actions may be difficult for most to understand, Melisandre has such a profound vision for the world in mind that only an Aquarius would have. Her loyalty to the Lord of Light is so deep that no one's judgment can interfere with her conviction. However, none of her choices involve personal pride. She has greatness in mind, for all of Westeros.

As the new Three-Eyed Raven, he has been astral projecting and receiving visions all his life, and he's only now beginning to understand the extent of his time-bending powers. Containing the wisdom and sensitivity of a Pisces, Bran transcends his earthly body and can receive messages from all the realms beyond.