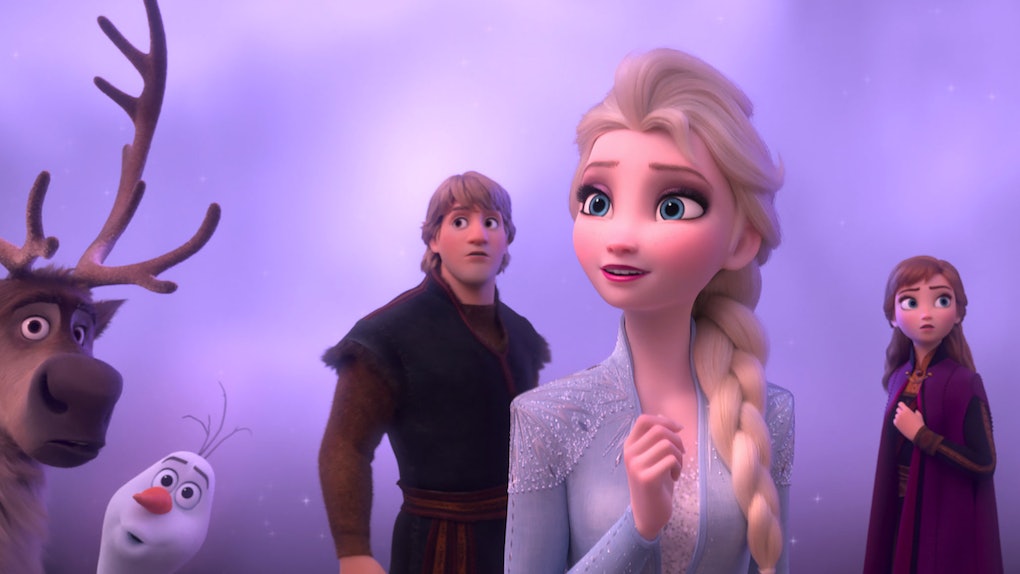 Back in 2013, Frozen became a worldwide phenomenon not only because of its story, but also thanks to its massively popular soundtrack of original songs. Fast-froward to 2019, and it sounds like it's happening all over again with Frozen 2. Ahead of the long-awaited sequel's release, Disney dropped the full soundtrack for fans to get stuck in their heads. Yep — the Frozen 2 soundtrack is here already, and it is packed with absolute bangers that will have you hitting the replay button for weeks to come.

The new movie's soundtrack is comprised of 46 tracks, since it includes outtakes and instrumental versions of each song, along with scoring. Without all the extras, though, the soundtrack boils down to eight new original songs sung by the movie's cast, along with three covers by popular artists that reimagine the sure-to-be hit standouts.

So, which songs have the best chance to become the new "Let It Go?" Honestly, the new soundtrack is so full of catchy tunes that it is difficult to predict which one will be the big breakout this time around. The album kicks off with a haunting lullaby sung by Evan Rachel Wood, who joins Frozen 2 in the role of Elsa and Anna's mother Queen Iduna. Then, for fans of fun-loving, carefree ditties, the soundtrack also includes an upbeat ensemble song "Some Things Never Change," along with a silly new song for Josh Gad's Olaf, " When I Am Older."

But the real standouts come courtesy of Idina Menzel and Jonathan Groff. As Elsa, Menzel belts to the high heavens in the exhilarating song "Into the Unknown," and she gets to show over her show-stopping vocals yet again in the climactic "Show Yourself." And although Groff's character of Kristoff was relegated to only one kind of silly song in the first movie, he totally steals the show this time around with his own synth-infused tortured love song, "Lost in the Woods." These three tracks definitely feel like the frontrunners to be the song everyone will hear playing on the radio for the rest of 2019 and into 2020.

Check out the full soundtrack for yourself on Spotify below.

As an added bonus for music fans, the new soundtrack also includes three covers, one each by Panic! At The Disco, Kacey Musgraves, and Weezer. This is a big upgrade from the first soundtrack, which only included one big-name cover, Demi Lovato's version of "Let It Go."

The covers totally reimagine each of the new songs: Panic! At The Disco puts thumping, arena-rock spin on "Into the Unknown," Kacey Musgraves turns "All Is Found" into an acoustic country ballad, and Weezer shifts "Lost in the Woods" from an '80s sound to their early-aughts, alt-rock vibe.

So you might as well start listening to these songs now, because you are most definitely going to be hearing them a lot more after Frozen 2 hits theaters on Friday, Nov. 22.

More like this
The Soundtrack For Netflix's 'The Irregulars' Season 1 Is Such A Vibe
By Ani Bundel
What Do BTS' "Film Out" Lyrics Mean In English? They're About A Past Relationship
By Michele Mendez
17 Times Singers Dissed Their Exes In Songs & Left Everyone Shook
By Corinne Sullivan
Stay up to date