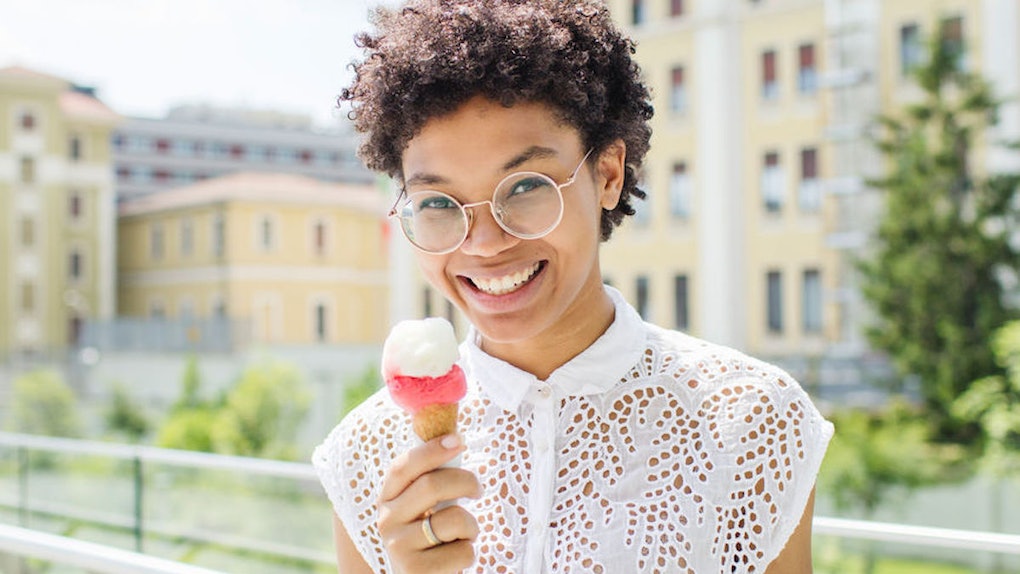 The Foods That Make You Happy Are The Ones That Are Both Nutritious & Delicious, Study Says

If you're anything like me, then you've probably fallen into the rut of just grabbing whatever's quick and easy to munch on when you feel hungry, without paying much attention to the nutritional value. But when you're not eating enough vitamins or getting the nutrients your body needs, new research suggests it can take a serious toll on your mental well-being. See, the foods that make you happy aren't just the ones that make your mouth water; according to a new study, they're the ones packed with the good stuff your body really needs, like vitamin D, protein, etc. Of course, there's room for all of these things in a balanced diet, but it's worth knowing which foods your body's truly craving to support your emotional well-being.

The new study, which has been published in the scientific journal Nutritional Neuroscience, anonymously surveyed over 500 men and women through social media about both their general well-being and their eating habits. According to ScienceDaily, the researchers discovered a link between nutritional deficiencies and poor mental well-being. Specifically, in what seems like a bit of an unfair twist, the survey's results revealed that women's mental states are more deeply affected than men's by the nutrients in their diets.

"These findings may explain the reason why women are twice more likely to be diagnosed with anxiety and depression and suffer from longer episodes, compared to men," lead researcher Lina Begdache, an assistant professor of health and wellness studies at Binghamton University, said in a statement. "Today's diet is high in energy but poor in key nutrients that support brain anatomy and functionality."

So, if you haven't been feeling your best lately and can't seem to figure out the cause, try adding some of these nourishing foods into your diet. But, as always, if you're feeling seriously unhappy, remember that it's best to check in with a health care professional before doing anything else.

You've probably already heard that this beautiful pink fish is great for your health, but what you might not know is that your oven-roasted salmon fillet is full of brain-boosting vitamins. Haley Hughes, a registered dietitian and owner of RDRx Nutrition, tells Elite Daily over email that the omega 3 fatty acids in oily fish like salmon or sardines are great for improving your brain health and cognition.

And, if that wasn't reason enough to treat yourself to your favorite salmon roll, the flaky fish is also rich in vitamin D, which is crucial for maintaining your emotional well-being, as a 2013 study published in the British Journal of Psychiatry found that there's a possible link between vitamin D deficiency and depression. So go ahead and cook up a pan of fresh fish for a major (not to mention mouthwatering) emotional boost.

Whenever I take the time to really look at the fruits and veggies I'm eating, I'm truly amazed by the spectacular beauty that comes from the earth. Purple yams are a stunning amethyst color, for example, but apparently all of that rich beauty isn't just wonderful to look at; it's great for your body as well. "Dark purples and blues are primarily beneficial for their anthocyanin content, which is good for brain and cognitive health," registered dietitian Marissa Martino wrote in a blog post for Rittenhouse Women's Wellness Center. And if you're not into purple yams like me, you can always snack on blueberries and grapes.

The warming spice that has become the star of golden milk lattes everywhere is a great way to add a boost of flavor to your day and support your mental health at the same time. A study published in the journal Psychopharmacology found that curcumin, a chemical compound that's found in turmeric, can act as a powerful antidepressant and support emotional well-being. By boosting both serotonin and dopamine — aka neurotransmitters in the brain that help to regulate feelings of happiness — the Indian spice can give you the extra nourishment you need. And, come on, how good are golden milk lattes, amirite?

Whatever You Damn Well Please

I'm personally a firm believer in the idea that your body will usually steer you toward the things you genuinely need to be eating, and in fact, there's legit evidence to support this: According to a study published in the behavioral sciences journal Appetite, your cravings are often linked to your nutritional deficiencies, so listening to and honoring your body's signals is definitely important when it comes to your diet.

Regardless of the actual foods you're eating, staying healthy does not have to mean being restrictive. SoDelicious vegan ice cream makes me happy, but whether you've got a major sweet tooth or your heart belongs to pizza, treat yourself to what you truly want.