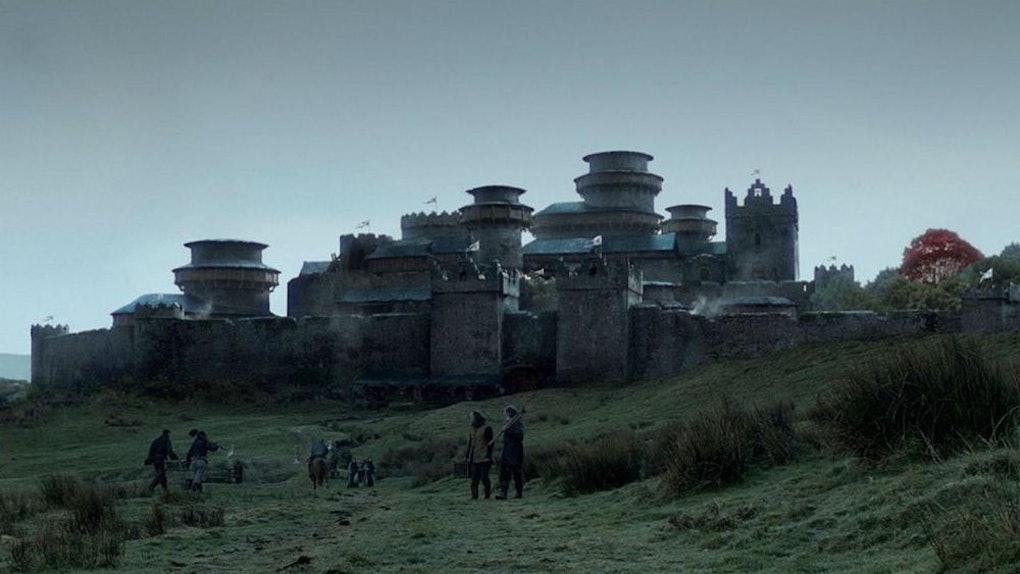 Game of Thrones is doing everything it can in this final season to keep spoilers under wraps. But as its filming period takes longer than it has in the past, it gives more opportunities for details to come leaking out the cracks of even the tightest run ship. So far no major details have been confirmed, though there are certainly rumors. And now a new Game Of Thrones Season 8 spoiler details has turned up, courtesy of the current winter time filming up in the areas that fill in for the North of Westeros.

Filming is currently centered in Ireland, which has stood in for the parts of the North that are south of the Wall, ie: Winterfell, the lands of the Eyrie and the Riverlands. Most of the shoot is happening in Moneyglass, which is where the on location set for Winterfell castle has been rebuilt for this season, which far more extensive battlements around the castle walls for actors to actually walk on.

Kit Harington was spotted having arrived back yesterday, which suggests that filming at Winterfell this week probably involves him, though exactly how or what scenes, fans aren't sure. Unlike previous years, it is much harder for fans to get close and snap photos of the cast coming in and out of the trailers to film in costume.

But that's not the actually spoilers for the opening episode that slipped out. Turn back now if you're not ready. Potential Spoilers for Game of Thrones Season 8 Episode 1 follow.

According to fansite Watchers on the Wall, they're hearing reports from those on the ground that the prologue scene for the opening episode is being filmed this week, and it's a scene that will take us back to location we saw first in the pilot.

But that scene isn't happening at Winterfell, though most of the pilot episode was spent there. While there is stuff being filmed on the Winterfell set over the next few days, they're also going somewhere else we spent time in the very first episode: Winter town.

Winter town, for those who don't remember is where we first met Tyrion, when he snuck off from the stuffiness of being a guest of the Starks and had a little fun with Ros, helping inspire her to travel to King's Landing later that season. We also spent some long drawn out scenes there with Brienne, and she stood waiting for the candle that never came. (Until like two minutes after she gave up.)

Winter town is the closest urban area to the Winterfell Castle, and during the autumn and winter months, the population swells, as far flung farmers and those who live off the land move inside the town walls for safety in numbers and piling together grain stores for the area's survival. Even clansmen from the mountains are known to gather themselves up and move in for the duration. According to the novels, during the winter months, the population can swell as high as 15,000.

And that make it the easiest target right by Winterfell for the Night King's army to attack, capture, and swell their ranks. It's practically a sitting duck, full of old men, women and children.

It is also a population most primed to completely freak out if say, I dunno, a few hundred thousand Dothraki go riding by on their way to Winterfell, and a dragon or two fly overhead?

Can you imagine what a hard time Sansa will have trying to convince the population of Winter town to come inside the Winterfell walls to safety, if where the Dothraki and dragons are? Especially when her argument is "Dead people are coming?"

The possibilities of starting our final season in Winter town are endless, and bringing the series all back to where it started is a wonderful notion. Game of Thrones Season 8 will arrive on HBO circa 2019.