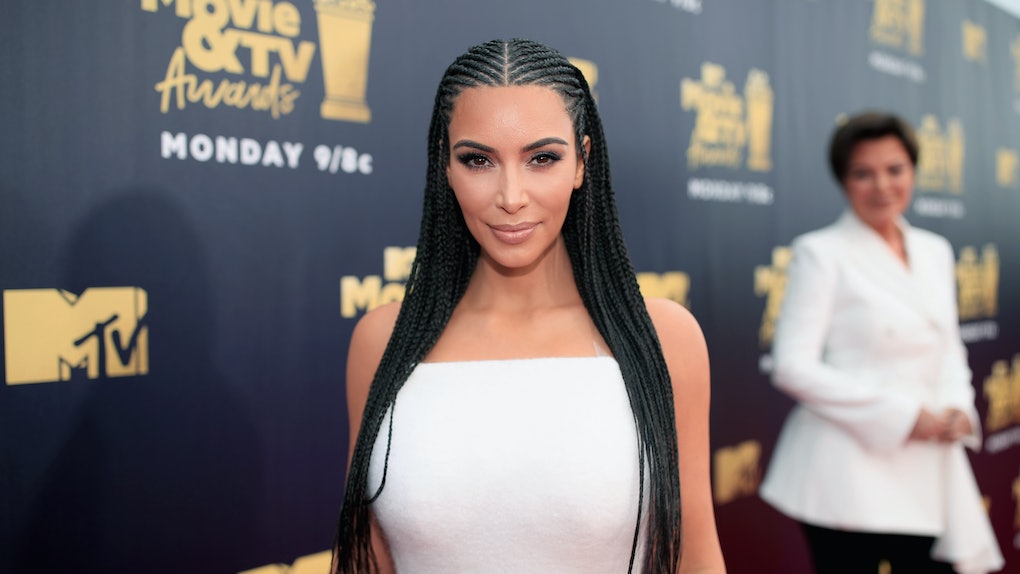 The day has finally come Kardashian fans! Kim Kardashian just shared the name of her new baby AND the first official photo of him. You're eyes likely aren't ready for this much cuteness, so start preparing now. Kardashian took to Instagram on May 17 to unveil his name to the world: Psalm West! And with it, she low-key shared the first snapshot of the little bundle of joy. And let me tell you, this photo of Kim Kardashian’s fourth baby will absolutely make your heart melt.

Let's first rewind a bit: As you probably know by now, Kardashian’s fourth child was born via surrogate on May 10. In the weeks leading up to the baby’s arrival, Kardashian confessed to E! News that she was feeling a little stressed. OK, maybe a lot stressed. She was so stressed, in fact, that she revealed that she wanted a CBD themed baby shower.

“This year, because I am freaking out so much, I just want a zen-like CBD-themed baby shower,” she told E! News in early April 2019. “I just want massages.” Kardashian also said that she has plans to hold “a tea ceremony with crystals” and alcoholic beverages because “we’re not pregnant.” So, she’s really all about the rest, relaxation, and meditation this time around, which makes sense. I mean, this is her fourth baby, so she’s got a lot going on!

However, her stress seemed to melt away once Mother's Day came around on May 12 and her little bundle of joy was finally settling in at home with the family.

A week after his birth, Kardashian revealed the baby's name to fans in a caption on Instagram. She posted a photo of a conversation with West, which included a photo of little baby Psalm wrapped up like a burrito in his bassinet crib.

West's texts probably served as a calming reminder to the new mother of four. The baby is just a a week old, so things are probably still hectic but I’m sure Kardashian is adjusting into her new normal routine.

As I previously mentioned, Kardashian welcomed her fourth baby via surrogate, which is the same thing she did for her third child Chicago. When she was pregnant with her oldest kids, North and Saint, she reportedly had a lot of complications that she didn’t want to risk again. According to People, Kardashian actually wrote about her experience birthing North as well as grappling with a life-threatening condition called placenta accreta.

“My doctor had to stick his entire arm in me and detach the placenta with his hand, scraping it away from my uterus with his fingernails,” Kardashian wrote. “My mom was crying; she had never seen anything like this before. My delivery was fairly easy, but then going through that — it was the most painful experience of my life!”

So, having children via surrogate was, in many ways, a necessary measure for Kardashian. But thankfully, all has turned out well for her. So happy for her and the rest of the family and hopefully the world will be blessed with more photos of baby Psalm sooner than later.