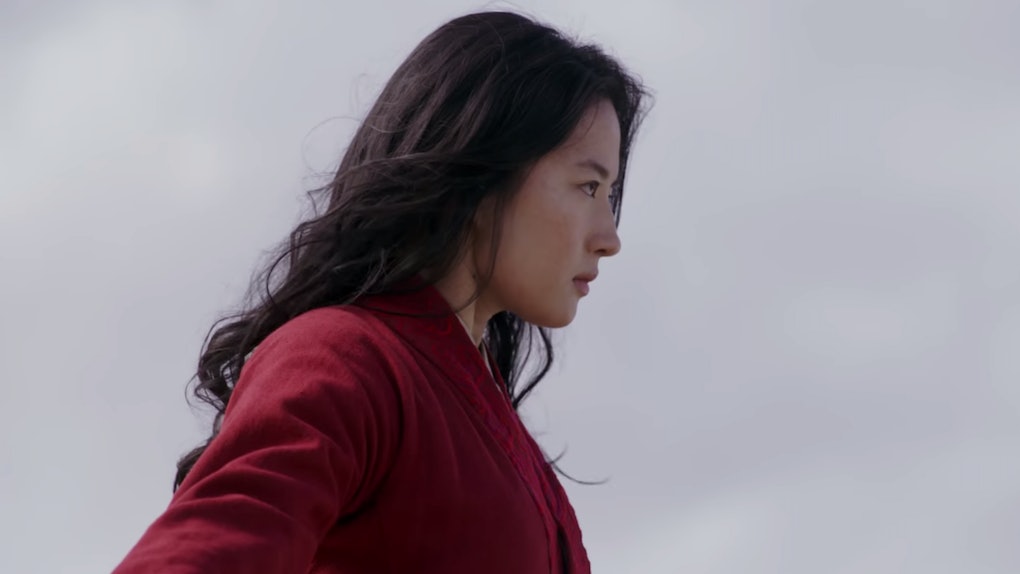 The FIFA Women's World Cup final blessed the world with a lot of good things: Team USA's fourth consecutive World Cup title, two incredible goals, and a solid game against the Netherlands. But viewers and Disney fans also got an additional treat during the game, because they got to see the first trailer for Disney's new Mulan. The first live-action Mulan trailer teases some intense moments in the Disney remake, and you'll definitely want to check it out.

Disney's new Mulan remake is joining an ever-growing list of live-action Disney films like Aladdin, Dumbo, and the upcoming live-action remake of The Little Mermaid. The one-minute-30-second trailer starts off with Mulan's family telling Mulan the matchmaker has found her "an auspicious match." In the scene that follows, Mulan's life is shown straddling two very different worlds. In the first, she's being trained to be a good wife by being composed, graceful, and disciplined. In the second world, the same Mulan is training to be a powerful warrior and fighter, where she also needs to be composed, graceful, and disciplined.

As the background music speeds up and gets louder, you can see the tension increase between the seemingly opposite worlds. TBH, the battle scenes look like they might just make you break a sweat while watching the film.

In the trailer's closing line, Mulan can be heard saying, "It is my duty to fight."

Check out the powerful and intense trailer for Disney's live-action Mulan, slated to hit theaters on March 27, 2020, per the official IMDB page.

Staying true to the plot of the 1998 animated Mulan, the text accompanying the trailer, which was posted on Walt Disney Studios' official YouTube channel, reads:

When the Emperor of China issues a decree that one man per family must serve in the Imperial Army to defend the country from Northern invaders, Hua Mulan, the eldest daughter of an honored warrior, steps in to take the place of her ailing father. Masquerading as a man, Hua Jun, she is tested every step of the way and must harness her inner-strength and embrace her true potential. It is an epic journey that will transform her into an honored warrior and earn her the respect of a grateful nation…and a proud father.

Fans are already taking to Twitter to voice their excitement and, in some cases, concerns following the release of the Mulan trailer. Twitter user @marinafang, who was originally skeptical of the remake but liked the trailer, tweeted, "Admittedly was a bit skeptical of a Mulan remake, but that trailer looked very badass, and there’s so much power in seeing a live-action version and in Asian girls being able to see themselves represented."

Another Twitter user, @jusborderline, said that even though many of the elements of the live-action remake would be different from the original animated film, "we might have to stan."

Despite the absence of Mushu or any musical numbers from the trailer, people, overall, seem stoked about thee film.

The live action Mulan will be directed by Niki Caro, who also directed films like The Zookeeper's Wife, McFarland, USA, and North Country. It will star Yifei Liu as Mulan; Donnie Yen as Commander Tung; at Jet Li as the emperor.

With the intense dichotomy between Mulan prepping to become a wife and preparing to go to war, it seems like there will be more than enough scenes that will have viewers on the edge of their seats. I, for one, have already started counting down the days until March 27, 2020.

More like this
Niki & Gabi's 'Twinning Out' Snapchat Trailer Teases Big Changes
By Rachel Varina
'Knives Out 2': Release Date, Cast, Trailer, Plot, & More
By Ani Bundel
Why Won't NBC Air The Golden Globes In 2022? Let's Break Down The Drama
By Ani Bundel
Stay up to date