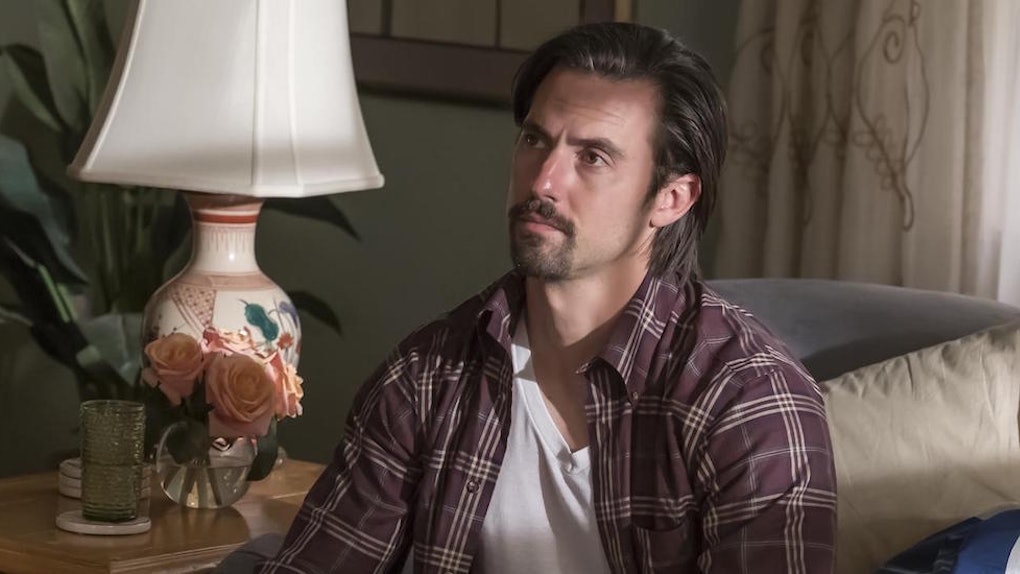 The moment every This Is Us fan has been waiting for/dreading is officially about to happen, as Tuesday night's new episode hinted in the last couple of seconds. Viewers have been anticipating the family drama to reveal how Jack died ever since the first episode, and now it finally looks like we are going to get some answers. The latest new episode of This Is Us ended with a fire alarm cliffhanger that pretty much assures eagle-eyed fans that Jack's death is going to happen in the next couple of episodes. Spoiler alert: Don't read on until you have seen Season 2 Episode 12 of This Is Us, entitled "Clooney."

Following the explosive revelations in the Pearson family therapy session last week, This Is Us found the Big Three picking up the pieces and attempting to move forward in "Clooney." Kevin moved back in with his mom and learned a bit more about Rebecca and Miguel's relationship, Kate threw herself back into wedding planning and may have made a new friend while dress shopping, and Randall learned a bit more about William's life and may have stumbled upon a new career for himself and Beth in the process.

This is all well and good, but the real kicker came in the last few seconds of the episode, as we saw Jack and Rebecca relaxing on their couch in the flashback storyline. After a family trip to the mall when the kids were teenagers, Jack and Rebecca sit down and wonder if they forgot to pick something up. As the camera zooms out, it becomes clear what they forgot to buy: a battery for their fire detector. The last image of the episode is a disconnected fire alarm hanging useless on the Pearson family ceiling... a clear indication to viewers that the house fire that many have speculated killed Jack is on the horizon.

Obviously, that disconnected fire detector was the real red flag that Jack's death is about to happen, but the episode gave us a few other clues as well. In the present-day storyline, Kate revealed that she began to lose weight right before her father's death, and sure enough, it was during that family trip to the mall in the past that we see she is fitting into smaller dress sizes. Also, we know that Kevin had a cast on his leg when the fire happened, which he is now newly sporting in his past storyline. After all these teases, I would honestly expect the house fire to happen in the next episode, or maybe the episode after if they can find some way to draw it out even more.

The big question now is whether or not that house fire is the thing that actually killed Jack. When the details of the fire were first revealed at the start of Season 2, it felt pretty obvious to most fans that it must have been the event that killed Jack, but there have been other theories that allege the fire may be a fake-out and Jack actually died shortly after the house fire. Milo Ventimiglia seemed to confirm that the fire may only be one piece of Jack's death in a new interview with Us Weekly:

I think people have seen what’s contributed to his death, possibly. But no, no one’s guessed it yet.

Even if Jack didn't die in the house fire, it definitely seems like the fire was a major part of his death in one way or another — we will all know the truth soon enough. Ventimiglia also confirmed that the big reveal is incredibly close:

The other thing to consider is how many episodes This Is Us has left in Season 2. "Clooney" was the 12th of the 18-episode season, meaning that the show has six more episodes to tie it all up. Of course, you would assume that it would save Jack's death reveal for the season finale, but it really does feel like the flashback storyline is just getting so, so close to the house fire that it might not be able to be drawn out much more. Expect to learn what actually went down with Jack Pearson very soon.

More like this
Who Did Emily Poison? 'The Handmaid's Tale' Season 2 Is Off To An Intense Start
By Ani Bundel
In 'Riverdale' Season 5, Toni Topaz Is The Black Superwoman Without A Cape
By Erika Hardison
These Tweets About Prince Philip's Death Will Break Royal Fans' Hearts
By Jonathan Borge
Stay up to date