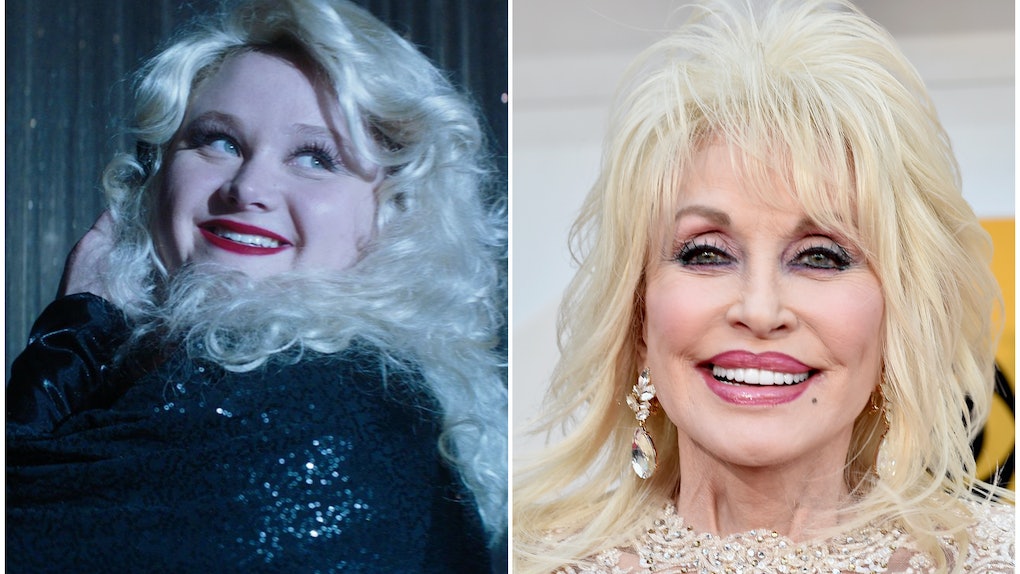 The 'Dumplin' Soundtrack Is The Ultimate Dolly Parton Playlist

The world tends to take some of its legends for granted, and after seeing Netflix's Dumplin', you may realize that you were totally sleeping on the wonder that is Dolly Parton. Dumplin's Willowdean idolized the iconic country star, but if you were a Dolly skeptic before starting the movie, your opinion probably changed by the time the credits of this Parton love letter rolled. The Dumplin' soundtrack is packed with old and new hits from the country star that are just some of the highlights from the feel-good movie.

Starring Patti Cake$ star Danielle Macdonald in the title role, Dumplin' follows plus-size teen Willowdean soon after she loses her Dolly-loving aunt. Swallowed by her grief, Will is inspired to join the local beauty pageant that her mother (Jennifer Aniston) runs and protest that picture-perfect world she's never quite fit. As she and her friends learn more about themselves throughout the competition's preliminary stages, Will often turns to Dolly Parton's music for guidance.

While Dumplin' features the classic Parton tunes that even a casual fan should recognize, it also introduces revamped and totally new music from the singer. After collaborating with younger artists for remixed, club-ready versions of standards like "Two Doors Down" and slowing things down for a new "Jolene," 72-year-old Parton then released six new songs specifically for the soundtrack. Sharing songwriting duties on the brand new material with "Beautiful" scribe Linda Perry, Parton dials down her typically energetic, sassy persona for a more reflective tone that matches Will's emotional experiences in Dumplin'.

"Girl in the Movies" has become the standout of the new music, earning a 2019 Golden Globe nomination for Best Original Song before Dumplin' even launched on Netflix. Parton performed the song on The Tonight Show Starring Jimmy Fallon, and its determined lyrics are universally applicable, saying:

I want to be the girl in the movies / The one with the glint in her eyes / The girl that seldom loses / Beautiful, with grace and style

Where are my tissues?

Parton recently explained how she became involved with the film to Entertainment Weekly, saying:

I had read the book [by Julie Murphy] because people told me there was a book about me, and I loved it...But I didn’t think any more about it until Jennifer Aniston’s company called me a couple years ago sayin’ that she was doing it as a movie and was gonna be starrin’ in it and asking if they could license some of my original music for the movie and I said, “of course."

While Spotify's version of the motion picture soundtrack includes Parton's older music, the official album is limited to the six remixes and six new songs. Featuring appearances from Miranda Lambert, Elle King, Sia, and more, the music delivers vibes of a perfect road trip or girls' night out. Even if you normally turn your nose up at country music, Dumplin's focus on it might just be enough for you to play out 2018 in a chorus of "Here I Am" or "9 to 5."

Dumplin' is currently streaming on Netflix. Its soundtrack is streaming on Spotify and is available for downloading on iTunes.

More like this
The Soundtrack For Netflix's 'The Irregulars' Season 1 Is Such A Vibe
By Ani Bundel
Is Netflix Making A 'To All The Boys' Spinoff Series About Kitty? Here's The Tea
By Rachel Varina
10 Rainy Day Movies To Watch On Netflix That Are Perfect To Pass The Time
By Kristen Perrone and Lexi Williams
Stay up to date