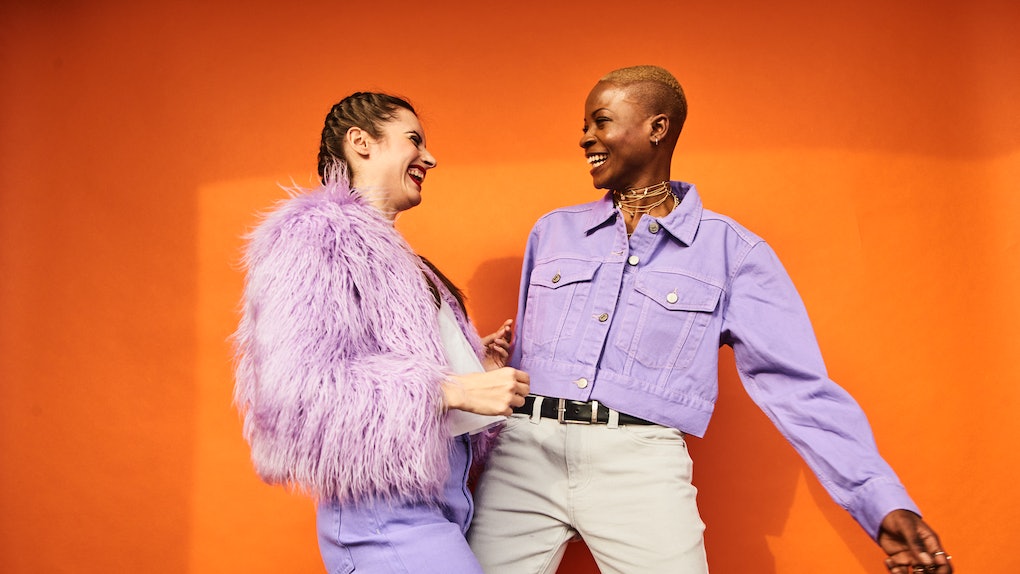 The Difference Between Love & Infatuation Is Crucial, Experts Say

If the mere thought of the person you've been dating sends shockwaves through your body, chances are you're starting to feel some very strong feelings for them. However, early on in a relationship, understanding the difference between love and infatuation can be crucial in the process of falling in love. Infatuation and love may seem like similar concepts on the surface (because they do have some qualities in common), but ultimately, they're two different experiences. Mistaking them is understandable. According to Dr. Joshua Klapow, Ph.D., clinical psychologist and host of The Kurre and Klapow Show, there's so much overlap between the early stages of love and infatuation that they're essentially indistinguishable from one another.

"[During infatuation] we have this 'obsession' with the person," Dr. Klapow tells Elite Daily. "We are drawn to them, we think about them, we fantasize about them, and we see them in their most favorable light. And if we're falling in love with someone, we're also infatuated with them." That said, there's an obvious difference between falling in love and the less-euphoric clarity of deeply loving someone after the initial glitter of perfection and newness has worn off. "Infatuation is about novelty," explains Dr. Klapow. "We become infatuated with a person because they are new, different, appeal to us, and may even represent a type of person we have never seen or been connected to."

Essentially, the magnetic pull we feel toward someone new for their immediately gratifying and surface-level attributes is what defines infatuation, says Dr. Klapow. "Kindness, physical attraction, social status, and novelty are all qualities that tend to drive infatuation," he adds. On the other hand, love is defined by a deep acceptance and appreciation for someone's whole self, not just their fun and positive qualities. "Love is a deeper, more intense, and larger emotion," says Dr. Klapow. "It represents a connection that looks at the person as a whole instead of breaking them down into their parts. It's caring about the person more than just feeling attracted to them. When you love someone, you're drawn to them because of who they represent to you, including their good and bad qualities."

There's nothing wrong with being infatuated with someone, notes Dr. Klapow. It's simply one of the earlier stages of falling in love, and it can be a sign that there's chemistry that could develop into a deeper connection down the line. "Infatuation is a seed that can then grow into stronger, deeper, more psychologically and emotionally complex experiences, which become love," explains Dr. Klapow.

But, try to avoid worrying about whether or not the start of new romance is guaranteed to turn into the real deal, warns Dr. Klapow. The only way to know for sure that your infatuation with someone will develop into more is to be patient and see how you both feel once the excitement and novelty of falling in love starts to wane. "Give the relationship time and exposure," urges Dr. Klapow. "An infatuation will plateau after a while. You will feel less connected, less trusting, and less desire over time. Pure infatuation fades, while love grows."

Once you've spent plenty of time together, true love will grow if you're both fully invested in understanding each other and continually strive to become closer. "If it is love, you will want to know more about them, you will want to share your life experiences with them, and you will want to become psychologically and emotionally closer, even as time passes." So, if after a while, one or both of you find yourselves uninterested in delving deeper into your connection, this is likely a sign that the infatuation didn't make the transition to a more profound love, and that's OK.

The truth is that finding lasting love is about so much more than the initial rush of infatuation. Even though infatuation might be what motivates us to get to know someone, true love is what keeps people together for years, and sometimes, lifetimes. Only time will tell if lasting love can grow, so in the meantime, try to just enjoy the thrill of connecting with someone new, and see where that thrill takes you.