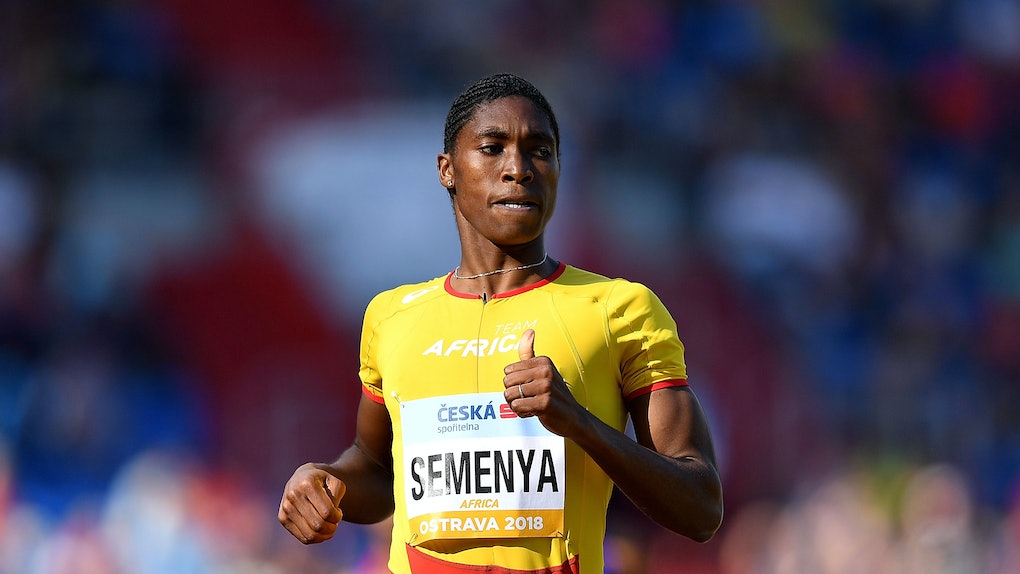 People are not happy with the way Caster Semenya's case ruling has panned out. The South African Olympic champion had been appealing the International Association of Athletics Federations' (IAAF) 2018 decision to limit women's testosterone levels, but she lost her case on May 1. The outcome has sparked conversations on Twitter regarding the policing of women's bodies, and they're seriously heated.

On May 1, a Swiss court ruled against Semenya, who claimed that the IAAF's restrictions on her body's natural production of testosterone was discrimination. According to the BBC, the athlete, who is a two-time Olympic gold medalist, was born with intersex traits that cause her body to produce higher levels of testosterone. The IAAF has claimed that women with high testosterone levels have an unfair advantage in events from 400 meters to a mile and, on Wednesday, the Court of Arbitration for Sport (CAS) agreed.

Because of this, she (and other women like her) will have to take medication to suppress her testosterone output for at least six months before she can compete in track events from 400m to the mile. According to the Irish Times, the regulations go into effect on May 8.

While (CAS) said in its ruling that the discrimination was "necessary, reasonable and proportionate" to protect "the integrity of female athletics," per the BBC, the internet just can't get over it.

Twitter users have said that Semenya is being targeted just because of the biological traits she was born with. One person wrote that she was "heartbroken" for Semenya.

"Her story has huge implications, and insights, for how we as a society consider completely natural and very common variations in our sex characteristics," another person said.

"MAKE IT MAKE SENSE," a Twitter user by the name of Wei Ming Kam fired out.

"If #CasterSemenya was small and dainty, and smashing world records left, right and centre, no-one would give two figs," news reader India Willoughby tweeted. "This sad and sordid campaign against her — which is demeaning — is because she doesn’t fit the normal parameters of femininity."

OK, seriously — you'd think that all athletes have varying kinds of advantages over each other. So is this really fair?

Some people think, yes, it is.

"Competition against women with normal testosterone levels is not fair," countered a Twitter user who goes by the name Gail Finke.

For her part, Semenya appears to be keeping her head up. "For a decade the IAAF has tried to slow me down, but this has actually made me stronger. The decision of CAS will not hold me back," she said in a statement shared with the BBC following the ruling. "I will once again rise above and continue to inspire young women and athletes in South Africa and around the world."

Meanwhile, the IAAF thanked CAS for its decision. It said in a statement to the Irish Times that it is “pleased that the regulations were found to be a necessary, reasonable and proportionate means of achieving the IAAF’s legitimate aim of preserving the integrity of female athletics in the Restricted Events."

It's been a long time coming for the IAAF. According to NPR, the IAAF tried to restrict female athletes' testosterone levels in 2014, but received some push back from Indian sprinter Dutee Chand, who was banned from competing after she failed a hormone test. CAS said in its decision at that time that it "was unable to conclude that hyperandrogenic female athletes may benefit from such a significant performance advantage that it is necessary to exclude them from competing in the female category."

What happened between then and now? Who knows. We'll see what happens in the future.