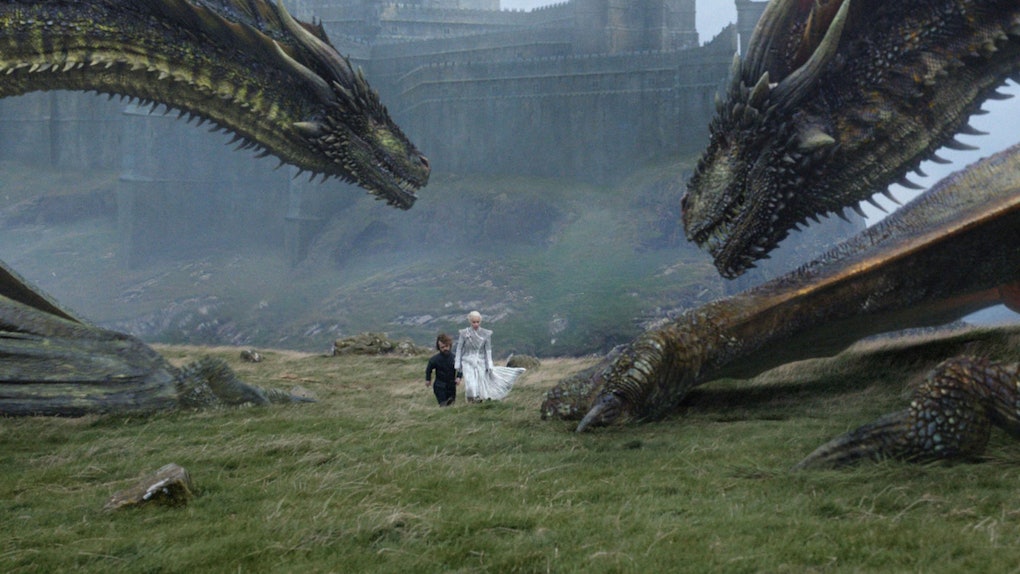 Death is inevitable on Game of Thrones. From the very first season, the show declared itself unafraid of killing characters that audiences assumed were safe due to actor status or by the lead role they occupied. Killing the un-killable characters was their MO, and they've stuck to it. We saw Ned Stark beheaded, the Red Wedding, the Purple Wedding, Jon Snow's demise at the end of Season 5, and Hodor's death in Season 6. But even still, no one saw the biggest Game of Thrones Season 7 death coming until it was too late.

Killing off one of Danaerys' dragons was both a brilliant move while also maintaining the unexpected factor. For years, fans had speculated who the third rider was. If Dany rode Drogon and "secret Targaryen" Jon Snow rode Rhaegal, then who rode Viserion? Gallons of ink was spilled theorizing everyone from Tyrion also being a "secret Targaryen" to Bran the Three-Eyed Raven strapping in.

And then it turned out it was all for naught. There was no third rider but death, in the form of the Night King. My local office death pool didn't even have an entry for Viserion. It was that unthinkable.

With Season 7 having garnered the most Emmy nominations this year with 22, The Hollywood Reporter sat down with some of the directors to discuss the significant moments of last summer. Alan Taylor, who directed Season 7 Episode 6, "Beyond The Wall," said killing off Viserion was perhaps the hardest thing he'd had to do since killing off Ned Stark in Season 1.

I have a history of killing beloved characters on HBO shows: I killed Ned Stark, I killed Julius Caesar [on Rome], I killed Wild Bill Hickok [on Deadwood].

Alan Taylor's return to the Game of Thrones director's chair was the first time he'd been there in many seasons. His last turn with the program had been back in Season 2, where he directed four episodes all together, including the finale "Valar Morghulis." For him, this was the perfect reason to come back.

As a director, it's great when you have a moment like that because you know it's going to have an impact. I knew that killing a dragon was going to be like killing a puppy. (Laughs.) It's an emotional moment when you kill a character that's flesh and blood and human, but killing a creature that's beloved the way dragons are? I knew it would have impact.

Viserion is now a turncoat against his family and his dragon brothers. His presence at the head of the wight army evens the odds for the Night King's army of the dead, as if they needed the playing field leveled. Consider also, as of now, Danaerys does not know her baby has been resurrected to fight for the opposing side. The shock of discovering it will also set her and Jon back on their heels.

How the army of the living will proceed remains to be seen. Game of Thrones Season 8 will air on HBO sometime in the first half of 2019.

More like this
'House Of The Dragon': 'GOT' Spinoff Cast, Release Date, Filming News, & More
By Ani Bundel
Netflix's 'Shadow And Bone' Virtual Experience Is Full Of Grishaverse Gems
By Ani Bundel
TikTok's #NotTheMainCharacter Trend Shows The Supporting Role You Connect With Most
By Marisa Casciano
Stay up to date