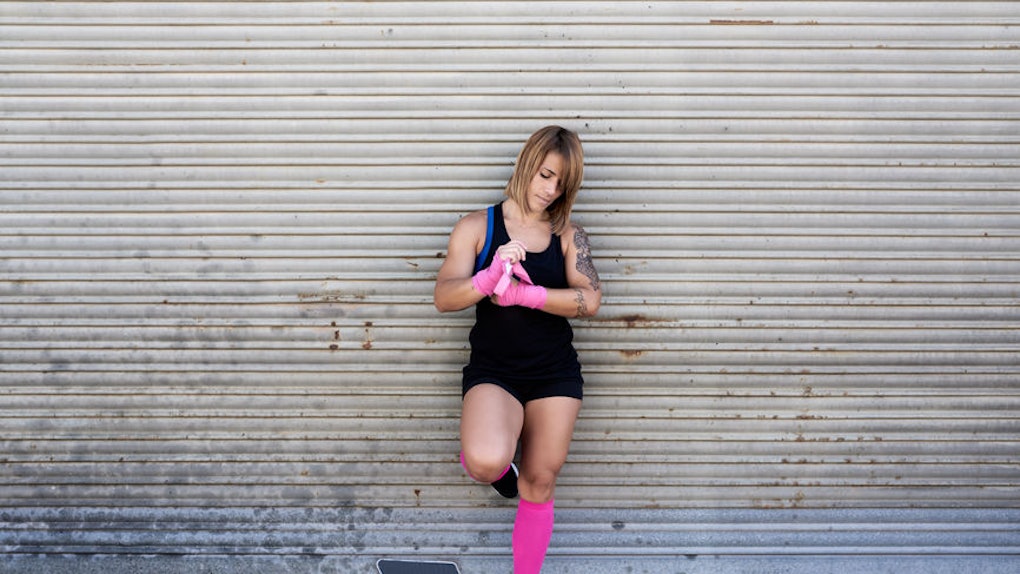 The Best Workout For Motivation Isn't Even That Difficult, According To Science

Motivating yourself to exercise after a long and stressful day can be tricky, especially if you're not genuinely excited for your workout in any way, shape, or form. Look, you're definitely not the only person who regularly skips a planned sweat session over and over sheerly because nothing about the gym sounds appealing, while everything about sprawling out and watching The Office does. If working out really is important to your lifestyle, though, it's worth looking into one of the best workouts for motivation, which may have been revealed in a new study. Spoiler alert: It's a pretty simple workout, though the benefits are huge.

For the study, which has been published in the Scandinavian Journal of Medicine & Science in Sports, researchers from the University of Jyväskylä in Finland looked at the effects of a nine-month resistance training exercise (aka any workout, such as weightlifting, that makes your muscles contract and work against some form of resistance) program on a group of 104 adults between 65 and 75 years old who, according to ScienceDaily, "did not meet physical activity guidelines for endurance exercise" at the start of the study, and who were also not familiar with resistance training workouts. Specifically, the researchers issued survey questions to the group at the beginning of the study, at the three-month mark, and at the very end, all of which asked about how the participants felt about resistance training, how motivated they felt to work out during each session, and how likely they might be to continue exercising after the nine-month program.

The results of the study revealed that resistance training, as a workout, significantly improves people's motivation to exercise in general, and even inspires them to plan ahead for their workouts, thus setting themselves up for success. According to the research, almost half of the participants continued to work out about once or twice a week on their own after the study was over, showing that, for one reason or another, resistance training is pretty effective in helping people stay motivated to exercise in general.

So basically, if you find yourself stuck in a workout rut, can't seem to organize your fitness schedule in a way that sticks, or just need more motivation and enjoyment in your routine in general, you might want to try resistance training for a simple, straightforward, and long-lasting incentive.

It's important to note, though, that this study only included a group of older, mostly sedentary adults, so technically, these results may not apply to a younger or more active population of people. However, a separate 2016 study published in the scientific journal BioMed Research International, which included a group of 143 women between 18 and 65 years old, showed that 12 weeks of full-body resistance training significantly improved the women's exercise motivation and self-perceived health by the time the study was completed.

The research doesn't lie, people: Resistance training seems to be incredibly motivating for just about anyone at any fitness level, so if it's not already a workout you're into, it might be time to give it a try.

Whether you use your own bodyweight as the resistance during your sweat sessions (which, FYI, you can totally do at home!) or you decide to dabble in heavier weights at the gym, science says you'll probably be more motivated than you were while, say, trotting on the treadmill or slugging along on the StairMaster. And along with that increased motivation, the benefits of resistance training also include improved thinking skills, increased confidence, better sleep, and the workout might even improve your flexibility, too.

And BTW, I promise I won't tell anyone if you decide to watch The Office while you work out. Your secret's safe with me.