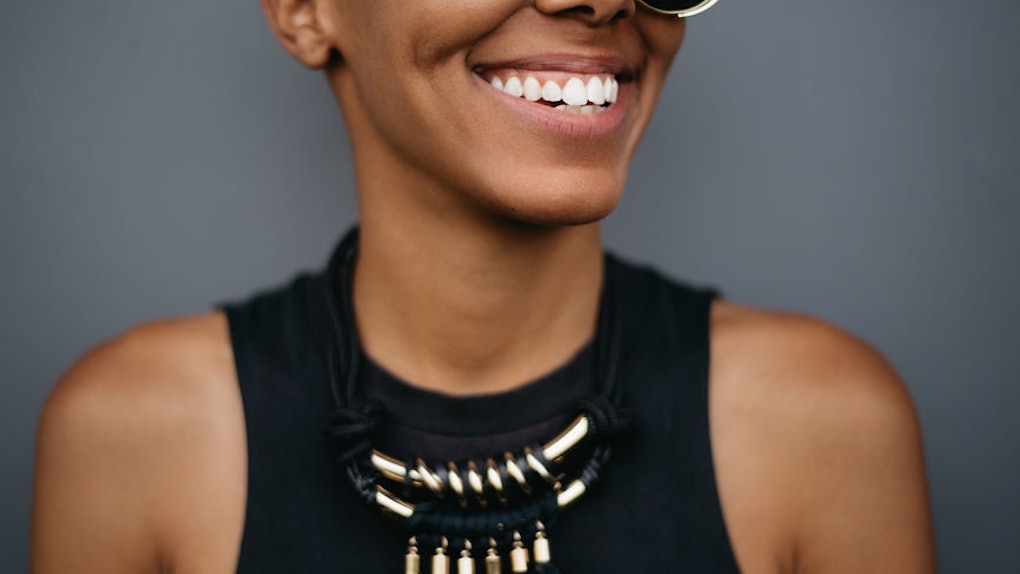 The Best Time To Floss Is Super Convenient, So There's No Excuse To Skip It

When was the last time you flossed? Be honest with yourself, seeing as how, even if you answer aloud, I wouldn’t actually hear you. If you don’t want to be honest with yourself, though, maybe that’s because flossing isn’t even on your radar of things to-do on the daily for optimal hygiene. Maybe my blowing up your spot is making you feel a tiny bit embarrassed right about now. Listen, my sister works for our family dentist, and I still don’t floss regularly, but even if it’s not your favorite thing to do, the best time to floss is actually any time you floss. Realistically, skipping this oral hygiene step has become a very bad, universal habit, and it’s gotten to the point where dentists and dental hygienists are begging patients to start flossing regularly, even if that means you only do it once a day.

According to a 2016 article from U.S. News & World Report, a study led by Duong Nguyen, a medical epidemiologist and member of the Centers for Disease Control and Prevention’s Epidemic Intelligence Service (EIS), found that only one-third of Americans floss every day. As for the rest of those surveyed, the news outlet says, about 37 percent said they floss less than once a day, while 32 percent admitted they never floss. Nguyen presented these findings at the 65th EIS Conference in Atlanta, Georgia that year, where he explained that flossing is viewed as a kind of annoyance these days; it's just one more thing you have to do in the morning or before bed, and a lot of people feel like it's more tedious than anything else. "[People] don't want to do it,” he said. “Yet, in the long run it can be so beneficial – it can prevent tooth loss and everything that comes with it."

If you assume flossing is optional, rest assured you're not the only one — but dentists encourage their patients to floss at least once a day to reap the benefits that go beyond oral hygiene.

You know how you should really brush your teeth twice a day, but brushing once feels better than nothing? From what I'm gathering, that’s pretty much the attitude dentists have toward people and their flossing habits these days. The fact of the matter is, most people could benefit from putting a little more effort into their oral hygiene habits. But the bare minimum is better than leaving the bathroom without a brush or piece of string ever grazing your teeth. So if you hardly, if ever, floss, the experts suggest starting small by going through the motions once a day, at a time that works for your schedule. Once that becomes routine, then you can start flossing twice a day, and eventually, maybe, after every meal.

“The act of cleaning between your teeth — be it flossing or using other methods like interdental brushes — is more important than the time,” dental hygienist Stacy Atnip tells Elite Daily. She adds that the best time to floss is when you have enough time to do so, and thoroughly, at that. “If you are a ‘morning person’ and tend to have more time, then you will be more likely to do it. If you are more of a ‘late night person,’ then you will most likely take the time to do it then.” In other words, floss at a time when you have a few minutes to really dedicate the time to getting in between each tooth and removing any lingering bacteria or pieces of food.

But while we're on the subject of what's going on inside your mouth, it's also worth noting that adding flossing into your daily routine is going to benefit your entire body, not just your pearly whites and rosy gums. According to Dr. Susan Maples, author of the book Blabber Mouth: 77 Secrets Only Your Mouth Can Tell You to Live a Healthier, Happier, Sexier Life, who specializes in the connection between oral and systemic health, flossing prevents gum disease, which just so happens to be up there on the list of things that cause inflammation in the body. If your body is inflamed, Dr. Maples tells Elite Daily, then there's a good chance inflammation can lead to some pretty serious systemic diseases, which you could have avoided in the first place if you'd just flossed like your dentist said to.

"If someone neglects to floss," Dr. Maples says, "they will experience many unhealthy and unpleasant symptoms such as halitosis (bad breath), tartar build-up, increased risk of cavities, yellow or dirty-looking teeth, bleeding gums, and possibly tooth loss, not to mention the toll it can take on the rest of the body like the heart and kidneys." When you think about it that way, flossing doesn't sound so tedious, does it?

Any time you have the opportunity to floss is the best time to do so, but if you're only going to floss once a day, try to do so right before bed.

In a perfect world, you and I would floss after every meal, and our dental health would be so pristine, dentistry would cease to exist. But IRL, most people don't even floss once a day, let alone carry floss in their back-pocket to clean up in between meals. So yes, once a day is better than nothing, and if that means waking up and going in with the string after breakfast before getting dressed for work, so be it. But, if you can manage, Atnip and Dr. Scott Shamblott, a general dentist and the founder of Shamblott Family Dentistry, both agree that the best time to floss is right before bed. "When you lie down to go to sleep at night," Dr. Shamblott tells Elite Daily, "there is less saliva in your mouth, so there is less saliva neutralizing food and beverage particles, and less saliva washing away food particles that are on or between your teeth."

To really get a feel for what's going on inside your mouth when you neglect to floss before heading to bed, Shamblott suggests slipping on a pair of gloves, taking a scoop of peanut butter, and smearing it all over your hand, getting in between your fingers, and closing them tight. From there, wipe the outside of the gloves with paper towel, cleaning up as much as visibly possible while still keeping your fingers closed together. When you open your fingers, there's still going to be a decent amount of peanut butter, right? Well, when you don’t floss, Shamblott says, that’s what it essentially looks like between your teeth.

"All that stuff between your teeth is going to sit between your teeth all night long and cause problems," he tells Elite Daily. During the day, you're talking, you're eating, drinking, and saliva can help wash away some of that lingering food from breakfast, or bacteria lingering at the back of your tongue. At night, your teeth and gums are somewhat defenseless, so the best thing you can do is floss to get rid of as much plaque as possible to prevent bad breath and all the other gunk that goes on inside your mouth.

So if, up until now, you've been on the struggle bus when it comes to remembering to floss, now is the time to redeem yourself, friend. If you can manage, try to clean in between your teeth as much as possible after a meal or a snack, but if you're starting from scratch, once a day is better than no times a day. Just keep in mind that all aspects of your health matter, oral hygiene included.