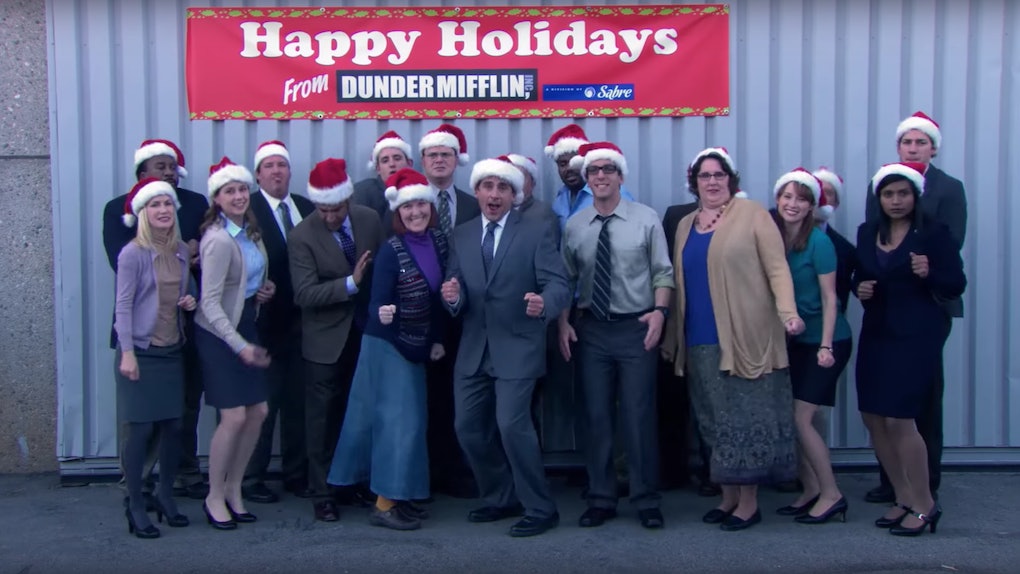 All nine seasons of The Office are available to stream on Netflix, so as soon as you're done watching all the newest Netflix Christmas movies, you can easily keep the holiday binge going with these classic episodes. That is, as long as Michael Scott doesn't cancel Christmas this year. No matter what, the one thing that's guaranteed is that doing a marathon of these Christmas episodes of The Office is definitely way better than going to your actual office party. So settle in, and let the festivities begin, Dunder-Mifflin style.

This is the first Christmas episode without Michael, and it's simply not as much fun to watch Andy try to grant everyone's Christmas wishes as much as it would be to watch Michael. That said, it's always a blast to spend time in the Scranton office, and this episode also offers some classic Jim/Dwight pranks.

After Steve Carell left The Office, the show was never exactly the same. But, this episode featuring Dwight going all out for a Pennsylvania Dutch-style traditional Christmas gets pretty close to filling the Michael Scott-sized holes in everyone's hearts.

This episode wins points for a series of really sweet, heartfelt moments: like Jim and Pam's tender homemade gift exchange, Darryl working hard to make his daughter happy on Christmas, and Michael's attempts to impress Holly with a fancy party. Oh, and Jim and Dwight have a pretty epic snowball fight, if you're more in the mood for typical Office silliness.

This episode gives us a pretty feminist Christmas representation in the form of Phyllis's female Santa Claus, who is honestly a modern holiday icon. Michael isn't really having it, though. He insists on dressing up too, only he tries to trump Santa by showing up at Dunder-Mifflin in a Jesus costume. With all the Christmas superstars making an appearance in this episode, it's a thoroughly festive time.

Michael is devastated after his girlfriend Carol breaks up with him (for photoshopping himself into a Christmas photo of her and her sons... so let's be real, he deserved it). But to cheer himself up, he takes the guys from the office to Benihana to find a rebound and they end up in one of the most depressing places to spend the holidays. There's some slightly offensive humor scattered throughout this episode, but the party competition between Pam and the Party Planning Committee fills this episode with more than enough joy.

This episode has it all: Dwight capitalizing off of the latest Christmas toy craze, Michael staging an intervention, and Meredith's hair catching on fire. It's all the Christmas kookiness you'd expect from The Office, including Dwight collapsing into a wrapping paper desk.

The Christmas episode that started it all. When Michael ignores the $20 limit on Secret Santa gifts and buys the temp Ryan an iPod, he only ends up disappointed that the handmade oven mitt he's gifted doesn't match up to what he bought. Thus begins the most hilarious gift swap of all time and a long tradition of The Office Christmas celebrations.