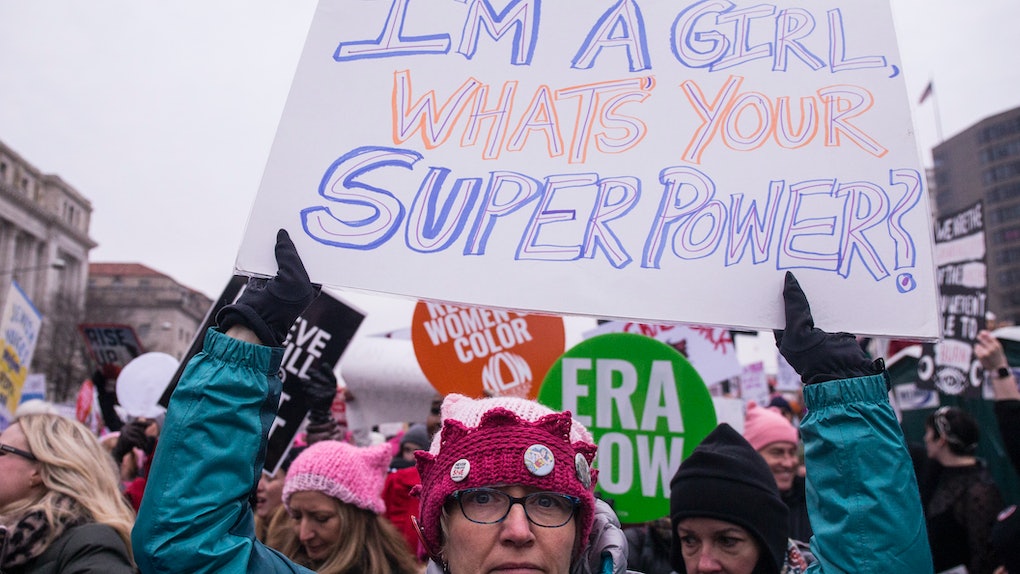 The third annual Women's March took place in Washington D.C. and cities around the world on Saturday Jan. 19, 2019. With thousands of marchers taking to the streets across the globe, there were some pretty incredible signs and posters on display, made with heartfelt quotes, demands for a better world, and potent imagery. It was hard to miss some of the best signs of the 2019 Women's March as social media became flooded with photos and videos of the marchers.

The first Women's March took place on Jan. 21, 2017, one day after the inauguration of President Donald Trump. Marchers were unified around issues like women's rights, LGBTQ rights, reproductive justice, and more, and many were protesting harmful language Trump had used toward women and other marginalized groups during the 2016 presidential campaign. According to The Washington Post, an estimated more than 4 million women marchers participated in the United States, with marches happening in all 50 states, all seven continents, and over 30 countries. It was likely the largest coordinated protest in U.S. history.

The 2019 Women's March slogan, "The #WomensWave is coming," reflects some of the changes already taking place in the U.S. government. A record number of women ran for office during the November 2018 midterms and 35 new women were elected to Congress, changing the makeup of government to include never before seen groups like Muslim women, indigenous women, and even a millennial woman, Alexandria Ocasio-Cortez of New York.

One of the most unique aspects of the Women's March is the creative labor that goes into making the signs. Whether serious or hilarious, succinct or lengthy, there are countless heartfelt signs seen along the march route. From colorful signs calling for inclusion and equality, to a riff of Ariana Grande's late-2018 hit, "thank u, next," to a sign featuring the one and only Ruth Bader Ginsburg, the 2019 Women's March signs really delivered.

Of course, a call to "thank u, next" was included.

Pointing out the importance of intersectionality along with equality, this sign from @WomensMarchKern really delivers.

Given that RBG has been overcoming some medical issues as of late, it was no surprise that a sign in her honor found its way at the Women's March this year.

The Women's March website lists eight unity principles that guide the organization's work: ending violence, reproductive rights, LGBTQIA rights, worker's rights, civil rights, disability rights, immigrant rights, and environmental justice. Many of the signs at the 2019 Women's March captured and reflected these principles as well as a myriad other values outlined by the Women's March like equal pay, comprehensive healthcare for all, security, and a fair minimum wage.

Though fewer people attended this year's march, per The New York Times, this year's event was not without controversy. A December article in Tablet alleged that some women's march co-organizers used anti-Semitic language at Women's March leadership meetings. Though the accused organizers have denied the claim and the Women's March has issued several official statements denouncing anti-Semitism and all other forms of bigotry, former marchers and local marches are being impacted by the serious allegations. Many people have also denounced Women’s March Inc. co-president Tamika Mallory for her support of Nation of Islam leader Louis Farrakhan, who has made derogatory remarks about Jews and homophobic comments. The Women's March released an additional statement, saying it did not support Farrakhan's comments. Elite Daily reached out to the Women's March for comment on the controversy, but did not immediately hear back.

Though the Women's March has received some level of criticism since its inception, many people with their own values and beliefs showed up to local marches around the world this year standing up for women everywhere and sharing their thoughts and principles on some absolutely rad signs.