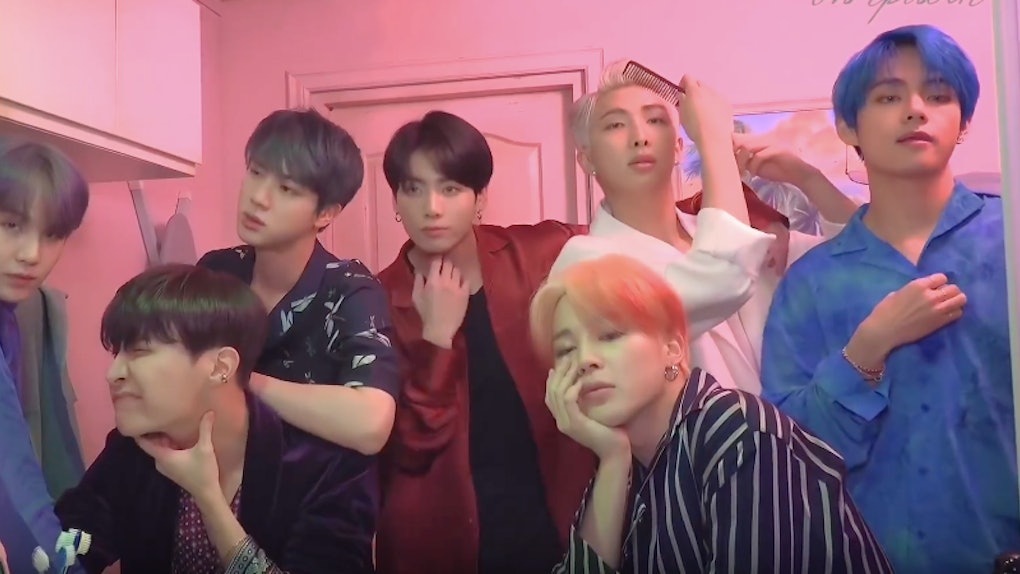 The Behind-The-Scenes Video Of BTS' 'MotS: Persona' Concept Photoshoot Is So, So Beautiful

It's time to get hype, ARMY, because BTS just dropped a new behind-the-scenes video of the making of their Map of the Soul: Persona concept photos, and it's so, so good! The boys first shared a sneak peek of the photos included in the four different versions of their new album way back on April 1 via four tweets on Big Hit Entertainment’s official Twitter account. The snaps gave ARMYs an amazing look at the various personas of Jungkook, Jimin, V, RM, Suga, Jin, and J-Hope — collectively known as BTS — and it was pretty incredible. Well, guess what? Now ARMYs have something even better to peep — a behind-the-scenes video of BTS' MotS: Persona concept photoshoot!

BTS hit up their official BANGTANTV YouTube channel on April 22 to share some pretty incredible candid footage that takes fans behind the scenes of the creative process involved with capturing all those cool, heart-stopping Map of the Soul: Persona concept images. The adorable video is a five-minute-and-40-second glimpse inside the world of BTS, and trust me when I tell you that ARMYs won't want to miss it, because the boys clearly have 1) so much fun and 2) so much love for each other.

The clip starts off on Day 1, according to a BTS fan account translation, with Jungkook telling viewers: "Finally, we're shooting a new album's jacket."

And here it is with subtitles:

According to RM, the whole concept behind the shoot was to make it feel like the members of BTS were just a bunch of regular guys goofing around and taking selfies with their friends — and not, you know, a bunch of legit superstars. It really does look that way, though, as the boys joke around and interact while primping. They hang on each other, make faces, play with each other's hair, and throw out a bunch of peace signs.

"I tried to portray a young and boyish vibe," V explained.

And yeah, I totally felt that.

The boys also gave ARMY some inside info on "Dionysus," while they posed with grapes and glasses of fake wine.

At least I think they were fake.

Check it out for yourselves:

"Dionysus, you probably heard it from Greek myth," RM explained. "A god of pleasure and luxury, richness. I enjoy exploring history. But actually, I throw a house party every day."

RM with the jokes!

On Day 2, we got to see some of the guys' grooming habits as they shaved, fixed their hair, and basically flexed for fans in front of a big bathroom mirror.

"I feel like I stood in front of the mirror all day," Jungkook revealed.

We also got to see how they got their poses on for some of those elaborate closet shots:

And how proud of themselves they all were when they finally wrapped up shooting.

"I think our fans will love this jacket," J-Hope explained.

"This jacket was for you," added Jimin.

Honestly, this whole video is just such a vibe that I could watch it a billion times while getting fake-wine drunk and it would still never be enough.