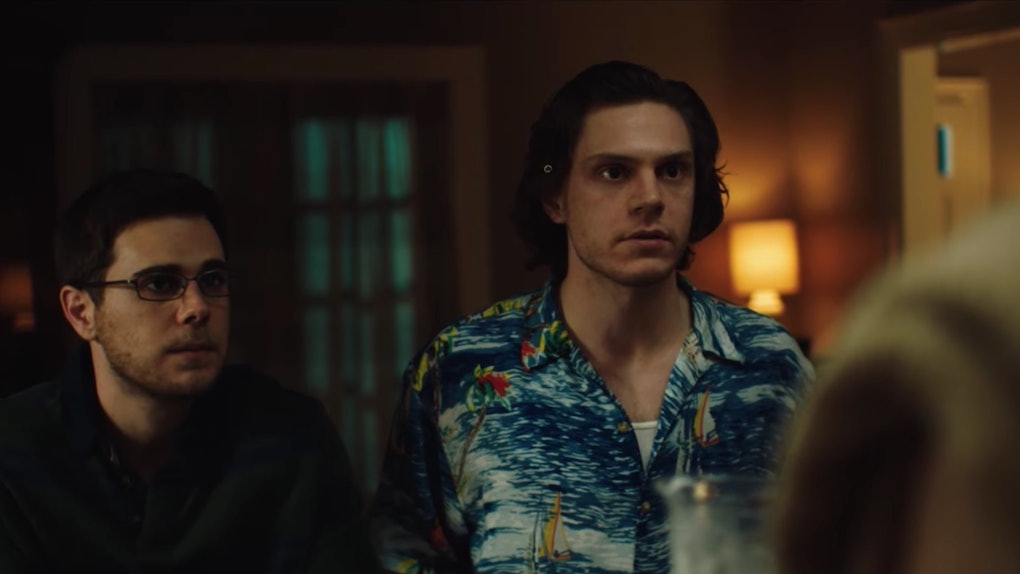 Remember when Evan Peters played fraternity bro Kyle in American Horror Story: Coven? Well, Peters is going back to college in a new movie, but this time, he'll be way less dead. Peters stars in American Animals, a drama about four friends who attempt to steal rare and valuable books from their college's library. Judging by the American Animals trailer, Peters totally commits to the role of the criminal mastermind, which isn't surprising considering that he has plenty of experience playing complicated characters on AHS. If you're an Evan Peters fan, get ready to lose your mind, because American Animals is so much more than your average heist movie.

American Animals is based on the true story of four students who successfully lifted rare books from the Transylvania University library in 2004. Peters' character, Warren, is bored with his usual college routine, so he begins planning a hypothetical heist with his best friend, Spencer (Barry Keoghan). The two become convinced that they can execute the plan — these are college dudes with an inflated sense of self, after all — and Warren quickly recruits two more friends, Chas (Blake Jenner) and Eric (Jared Abrahamson) to help pull off the library robbery.

Peters is every bit the Ocean's Eleven type as he convinces his friends to help — the trailer repeats his line, "You're in, or you're out," multiple times — and he never for a second doubts the plan, even as the others question whether they can successfully steal the books. "I don't want you waking up years from now wondering what could have happened and who you could have been," he tells Spencer. Warren is in it for the danger and excitement of the heist, but there's also a very, very large reward if they can pull it off: $12 million. Nothing will deter him from getting that money, even if it means squaring off with the uptight librarian, played by the always-intimidating Ann Dowd (Aunt Lydia in The Handmaid's Tale).

As much as I love Peters as a circus performer in AHS: Freak Show or as a ghostly spirit in AHS: Murder House, I've always had a soft spot for Coven's college-aged Kyle, so naturally, I'm super excited about Peters' role in American Animals. When the movie first premiered at the Sundance Film Festival in January, the movie was met with rave reviews and Peters' performance as Warren was praised by critics. Despite Peters' years-long tenure on American Horror Story, he hasn't really broken out as a big-name star. Hopefully, once producers see American Animals, they'll recognize that Peters is ready to be a movie star and start giving him all the roles.

Peters' presence isn't the only part of American Animals that you should be excited about. Intercut with the film's footage of Warren and his friends are present-day interviews with the men behind the 2004 heist. These men — the real Warren, Spencer, Chas, and Eric — appear throughout the film to provide commentary on what was going through their heads at the time. Rather than make just a regular heist movie, director and writer Bart Layton has created a film that shifts perspectives and jumps through time, adding another layer of excitement for the audience.

If Peters' co-stars look familiar, it's because they've all been in a bunch of high-profile projects. Keoghan recently starred in The Killing of a Sacred Deer alongside Nicole Kidman and appeared in Dunkirk as a young soldier named George. Jenner is best known for his roles in The Edge of Seventeen and Glee, which he joined in Season 4 after winning The Glee Project. And Abrahamson is currently starring in the Netflix series Travelers and had a small role in the MTV comedy Awkward. These young actors are all amazing, so hopefully American Animals gives them a chance to shine.